Our Program for August 10th:

Bill Crowley led us in the Pledge of Allegiance and Bill Rousseau gave us a quote from Olympian Kerri Walsh, “Breathe, Believe and Battle.”

Julia Parranto’s nephew, Ben, needs a heart transplant, Kris Anderson’s dad in in the hospital for heart issues, Jim Johnson is not doing well…………..but the good news is that Cathy Vicini is back!

Karen Ball said there were 8 marbles in the pot.  Steve Reuter had the lucky number and was even luckier pulling the right marble!

President Jose wants to do something different with the magazine quiz this year.  Debi Zaft will ask someone to read an article and do a “book report” on that article.  Kris Anderson did her book report on the article “Breaking Barriers” (page 42-45 in the August issue).  Stefan Hell received the Nobel Prize in chemistry in 2014 for his superresolution fluorescence light microscope, the first major improvement to microscopes since 1873!  So read this article and be prepared for a quiz at next week’s meeting!

Matthew Henry received his red badge today.  Matthew is the new CEO for the Sonoma County Family YMCA.  He was previously a Rotarian in Pomona.  Please welcome Matthew to our club!  Yale Abrams is his sponsor and will also be his mentor.  Carolyn Fassi wasted no time in getting him signed up for fellowship activities at our meetings!

Yale Abrams announced that the Hands on Project out at the Laguna de Santa Rosa Foundation is scheduled for Saturday September 24th.  See him to sign up.

August 17th will be our next club assembly.  At that meeting you can sign up for a committee (or two) if you are not already committed to one or two committees.

Sam McMillan, Steve Olson and President Jose were recognized for their work at the Sonoma County Fair Junior Livestock Auction.  They bought for our club 2 lambs and 2 pigs.  We will have a BBQ in the near future to taste the product and auction it off.  This is about as high a quality of meat that you can get.  We support the junior livestock auction because it teaches the kids life skills. 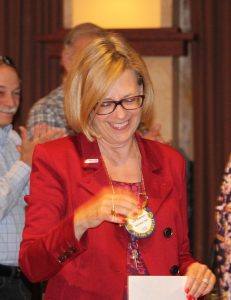 Kris Anderson-Rotarian of the Month

ROTARIAN OF THE MONTH FOR JULY

Kris Anderson was recognized for a quick trip to the Upper Peninsula of Michigan for a family reunion.  However this was just a ruse to announce that she was selected to be the July Rotarian of the month!

Dana Gioia is our Poet Laureate for the State of California.  He was nominated and asked to come to Sacramento for an interview.  It was all so very casual. 5 months later he gets a call that he was selected and the announcement was to be that same day at 11:00. His goal as poet laureate is to read his poems in all 58 California counties.  He has done 20 of the 58 thus far.

He recited 4 of his poems from his book, 99 Poems, “The Apple Orchard,” “Finding a Box of Family Letters,” “Majority,” and “A Marriage of Many Years.”

Dana splits his time between Southern California, where he teaches at USC, and Santa Rosa.  He has degrees from Stanford and Harvard.

He started out in the corporate world working for General Foods in 1977.  In 1992 he quit to become a full time poet.  He served as the Chairman of the National Endowment for the Arts 2003- 2009.  While there he was able to revitalize the organization and had bi-partisan support in Congress for arts endowment and education.  Not an easy feat to do!

As an aside, his brother participated in the Rotary Peace Scholars Program!