Getting To Know You Better

We have another opportunity to find out more about some of our long time club members:   Featured will be:  Dan Balfe, Sam McMillan, and Jeanne Levin.

Dan Balfe transferred to our club in 2018.   He will tell us about becoming a Rotarian when he lived on the coast in Cambria.

And finally we will hear from Sam McMillan, a longtime member since 1996.

–> Debi Zaft will email you the link for online, once you have paid.  Use this link to pay.  CLICK HERE!

Click here for the current calendar (Subject to updates).

Project Amigo – Last call for those who wish to attend. Currently, it is President Kris, Julia Parranto, and Rose Frances.Keep checking back.

May 27 – 31, 2023: The Rotary International Convention will be in Melbourne, Australia. You can sign up now and book you room(s). This will be RI President Jennifer Jones’ convention so it should be epic as the first woman RI president.

Watch The Meeting:  Did you miss the meeting?  Here is a link to the recording of last week’s meeting:
(Click here for recording – No recording this week)
Please note it is only available to view until: n/a

“May your sweaters be ugly, your tummy stuffed with good food and your heart full from the love of your friends and family!”

Norm Owen is a member of our club but was introduced by Mary Graves as a visiting Rotarian since we haven’t seen him in some time. It was his 80+ birthday. Happy Birthday, Norm!

Micaela Baquero, SRJC Rotaract President from Equador, introduced Jullian Gossaet, Vice President of SRJC Rotaract, who is from Germany, and Robel Negash, a member from the Netherlands. 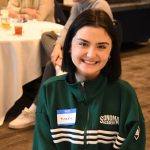 Armon_____was visiting from the Rotary Club of San Antonio, where he has been a member for 15 years.

Pete Lescure willingly conducted the raffle today since no one else stepped up. Peter Holwenski had the winning ticket but didn’t select the winning marble. He received a $10 consolation prize. Rose Frances did the Second Chance drawing. Peter had the winning number again and chose a Scratcher as his prize.

Craig Meltzner acknowledging the Four-Way Test, said he was supposed to have done the raffle today but had not put it on his calendar. So instead, he donated $20 to the Polio Plus pail.

Christmas Carnival – Ann Gospe thanked everyone who volunteered to help with the Carnitas Village Children’s Christmas Carnival on such short notice. The Carnival was a success by all accounts.  Debi Zaft led the cookie decorating station. Rose Frances used

her usual creative talents for ornament decorating, and Pete Lescure used his engineering talents for the paper chain center. Thanks to the Kolins for their beautiful wreath-making activity. Odalis Medianeros sang to entertain and add joy to the event for the children and families. Thank you to all the volunteers for lending their talents and time to make this a fantastic first-time event for us.

Ukraine Project – Jeff Gospe updated the club on the Ukraine project. The next round of donations will purchase emergency generators for power, water, and sewage. The funds will buy two different types of generators, small generators at $600 to power electronic devices and large generators at $1300 to power the above utilities. Jeff noted that if you wished to make a year-end tax deduction, now was the time to do so. The first round of funding that will be sent next week is approximately $10,000.

Dan Balfe thanked Jeff for all he is doing to support the Ukraine relief effort.

Giro Bello – Robert Pierce announced that there would not be a Giro Bello Committee this year but rather a Giro Bello Team. Everyone is expected to be on the team! The first “TEAM” meeting will be held the second week of January. Jeff Gospe reminded us that we could make a tax-deductible donation to Giro Bello now before the end of the year. Jeff is the first corporate sponsor at a generous $2,500 level. Thank you, Jeff, for getting us started!

Ted Wilmsen reported that we should have a date for the dictionary delivery immediately after the first of the year. He is sending an email list with the current volunteer signups to deliver the dictionaries to the schools.

Craig Meltzner announced that the Public Safety Awards would be on Wednesday, January 18, 2023.

President Kris thanked those who participated in this year’s Senior Poinsettia Project, including Paul Hamilton’s See’s candy donation. There were 39 plants delivered to the low-income seniors at Vigil Lights apartment complex.

(No program slides this week)

Still need a few bulletin writers. Need a person on the board for Vocational Service Recognition

(Click on image below to view additional meeting pictures)