Our Program for July 20th:

Having participated as a 10,000 Degrees mentor himself, President Jose Guillen is launching his presidency in a powerful way by bringing to our Club this outstanding program and speaker.

Lisa Carreno joined the Community Foundation Sonoma County and 10,000 Degrees in 2012 to create greater college access resources for Sonoma County students.  10,000 Degrees believes that every child deserves the opportunity to go to college and reaches over 4,200 Sonoma and Marin students annually by providing early awareness, intensive college prep, college exploration and financial aid counseling, support and mentoring to students from low-income backgrounds and often the first to attend college in their families.

Lisas was born in Tampa, Florida to a Cuban, Spanish, Italian and Ciboney Indian family that had little formal education. No doubt her two grandmothers were shining mentors who encouraged her education. She received her Bachelor of Arts in Latin American history in 1984 from The Catholic University of America in Washington, DC, and, after a year working in the college’s admissions office, entered The Columbus School of Law at Catholic U.  Lisa graduated with her Juris Doctor in 1988.

After admission to the Maryland Bar, and a brief period in private practice, Lisa was appointed by Governor William Donald Schaeffer to direct the Maryland Commission for Women.  From 1993 to 2005, Lisa directed the YWCA Sonoma County, leading the organization through many innovative joint ventures with the faith community, law enforcement, other nonprofit agencies, and many government partners, to fulfill the YWCA’s mission of empowering women and children and eliminating racism.  After her 2006 admission to the California Bar, Lisa joined the litigation and estate departments at Spaulding McCullough & Tansil LLP.

In September 2013, Lisa became the first Latina to chair the Sonoma County Fair in its 78-year history.  In February 2014, Lisa was the first member of the community appointed to serve on the Editorial Board for the Press Democrat.   Lisa currently chairs the Board of Directors for Forget Me Not Farm Children’s Services and serves on the Community Benefit Committee for St. Joseph Health, Sonoma County Health Action Partnership Council, Congressman Mike Thompson’s Immigration Advisory Group, Los Cien Sonoma County Board of Directors, Sonoma County Coalition for Foster Youth, and Sonoma County LGBTQI Giving Circle Steering Committee.

Jose Guillen and his wife Esthela

In honor of El Presidente Jose’s first meeting, the National Anthem of Guatemala was played.

El Presidente Jose was born in Guatemala and lived there until he was 14 years old.

Marnie Goldschlag asked us to put our hand over our heart (if we had a heart…LOL!) and stand together for the Pledge of Allegiance.  Ray Giampaoli recited a few lines from Jackie DeShannon’s “Put a Little Love in Your Heart.”

First on the agenda was for former President Doug to get his new blue badge and for El Presidente to get his banner for the year “Rotary serving Humanity.”

Per Brandon Uhrich there was $137 in the pot.  Bill Crowley’s number was called, but he did not win the pot.

Ginny Cannon tells us that Doug Roberts’s hip surgery went well and he is home recuperating.  Cathy Vicini’s knee surgery also went as planned.  They both will be out for about a month. If you want any jokes from Cathy, check out her Facebook page.  The sad news was that Healdsburg Rotarian Kent Mitchell died suddenly this week when out with his grandkids.  Our hearts go out to Kent’s family and the Healdsburg Rotary Club.

The July birthday boys and girl get serenaded by Jose Guillen

Giro Bello had revenue of about $70,000!  At next week’s meeting the Giro Bello committee will give a report.

Robby Fouts was recognized for climbing a tree and then falling out of it.  He just has a scratch above his eye and broke a tooth.  Can’t keep this kid down!  He donated $50 to the John Brown fund. 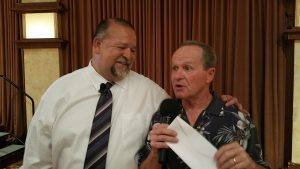 JUNE ROTARIAN OF THE MONTH

Chip Rawson! Chip was recognized for being one of those quiet Rotarians.  He does lots of little projects and has donated his painting skills many times for our hands on projects.  He does a great job with no fanfare.

(Pardon me if I just call him Jose  for this part of the bulletin).  Jose was born October 15, 1955 (which makes him one day older than this bulletin writer!) in Guatemala.  He arrived in the United States on March 10, 1969.  Such a cute little boy!  In 1974 he started his career in civil service (And boy did he have the hair back then!)  He worked in many courthouses throughout the state and did a very brief stint as a deputy sheriff for Los Angeles County.

Before becoming Court Executive Officer and Jury Commissioner for Sonoma County, he served as Court Administrator for Beverly Hills, Napa, Riverside, and Imperial Counties and have all been blessed to have him on board.  Jose finally got to the most beautiful county in California and the best Superior Court, Sonoma County, in 2009.

Here are what Jose sees as areas of focus and opportunity for his year:

Let us live up to this year’s theme where “Service Above Self” leads to” Serving Humanity.” 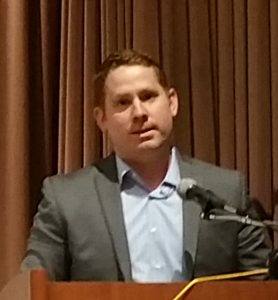 A few giggles from the audience when Detective Mahurin told us that he told his boss, Eric Goldschlag, that he was interested in prostitution. He told of a night in the Target parking lot, talking to a prostitute as to why she was doing this for a living when she could have a real job.  She told him, “I will make $800 tonight.  At Blockbuster I would make $8.00 an hour.”  He gave her a ticket and she was on her way.

He told the story of a 13 year old runaway.  Her mom beat her at home so she left with the intention of going to Chicago where she thought she would have a safe place to live.  Some girls told her about working as a prostitute to get the money to get to Chicago. She thought it would be one night…..

She was reported missing and the Santa Rosa police started looking for her.  There were rumors that she was working as a prostitute in Marin and San Francisco.  They spent 3 nights staking out a motel before they found her.  At this point she had been missing 4-4.5 weeks.

Now that they found her, what were they going to do with her?  Her mom beat her and mom’s boyfriends have raped her.  What services to they have to help her?  So they treat her as an assault victim.  She was having, on average, 6 dates a night, 6 days a week!

So the police have changed how they address prostitution.  It used to be that all the focus was on arresting or ticketing the prostitute and little to no punishment for the pimp or john.  Now prostitutes are referred to as the “victims.”  The pimp is called a “trafficker” and the john is a “purchaser.”  The police look to get the prostitutes into a diversion program and prosecute the traffickers and purchasers.

In the last couple of years 32 men have been arrested for being purchasers.  They have ranged in age from 19 – 78.  Most were from Sonoma County.    The police do stings to catch the traffickers and purchasers.  Dates are arranged by phone.  If they do not show up, they still have the phone number and they send them a letter to them.  You can imagine what their wives say when these letters show up….

How do they know if what they are doing is working?  Detective Mahurin says they monitor various websites for ads. It appears they are dropping.  Teenage girls are more likely to report a friend is in trouble.  Sentences for being caught have gotten longer.  The bad guys are now registered sex offenders.