Our Program for June 22nd:

And then there was one…..
Join us Wednesday for the final meeting with a Boston accent. Soon to be Ex-President Doug will disclose the 2015/16 Rotarian of the Year, provide a year end wrap up, thank a few and stick a pin in Jose’s lapel.
Where else would you want to be?

THE BEGINNING OF THE END

President (Captain) Doug Johnson is steaming for port at flank speed.  Two weeks to drop anchor! Like Pavlov’s dogs, he rang the bell and we all rose in unison with apparent wonderment of how quickly this Rotary year has disappeared. Richard Lazovick initiated the Pledge of Allegiance and Carolyn Fassi lead us in a moment of silence for the Orlando shooting victims and then she recited a familiar prayer. 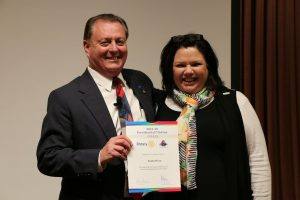 LET THE SUNSHINE IN

Ginny Cannon didn’t break out in song, but you could feel it.  No news is good news.

Ted Wilmsen, a regular raffle winner, revealed that $98 was the prize money and Past President and DG Norm Owen won the right to draw the yellow marble.  NOT!  He recovered his investment with the $10 consolation.  Feel the yellow, Norm.  Next time, feel the yellow.

Cathy Vicini was back at it with another seasonal ‘how politics works’ joke.  Thanks Cathy, for educating and entertaining us at the same time!  Forget wine – be a media mogul.

President Doug lavished praise on the recent bocce ball tournament and on novice Ginny Cannon’s outstanding performance contributing to our club’s 2nd place finish.  New member Andrea Geary planned and executed the event, which highlighted her talent as an event planner. She earned her stripes.

The next Rotary International convention is in Atlanta, Georgia (the state, not the country) in 2017.  President Doug strongly urges us to sign-up now to attend. (How would a nor’easterner with a thick Bostonian accent understand a southerner with a thick Georgia accent? Just say: baked red clay beans!).

After 11 glorious years as our Club Secretary, Jack Abercrombie is retiring from that post. Thanks for the memories, Jack, and your dedicated service to us, your club.  That job is open and pays a nice salary, too.  If you are interested in the job of Club Secretary, see President Doug or President-elect Jose Guillen for more details.

Jackie McMillan reminds the Giro Bello volunteers to wear their green t-shirts at the event on June 25.

And, Emily Harrington says there is still time to support the Giro Bello as a sponsor, but click in and get it in gear now!

Past President Kathleen Archer presented us with a banner from our sister club in Columbia (the country, not the city) for our work with them on the micro-credit bank loan program (one of our World Community Service committee projects).

Visiting Rotarian Eloise Tweeten presented us with a plaque for our 2nd place finish in the awards given for the floats in the recent Rose Parade – the one with the freshly clipped roses from you-know-where.

President Doug introduced DG Erin Dunn who presented us with a gold award (a RI Presidential Citation) for our club’s work this Rotary year.  Maybe we are the best club in District 5130!

Shari Shamsavari with her Father

The tireless Kim Graves made a Paul Harris Fellowship pin presentation to Dr. Shari Shamsavari for her completion of her Dad’s Paul Harris award.   He attended today’s meeting as her guest.

With a thrill in his head, President Doug summoned these Rotarians for confessions and contributions.  You could literally see hands going into pockets and purses to pull up that green stuff.

Elizabeth Karbousky’s employer (Union Bank) has opened a Santa Rosa office and she was so elated about not driving to Napa Valley that she finished her Paul Harris Fellowship (about $400).  Way to go Elizabeth!

Ray Giampaoli, a US Army vet, acknowledged that yesterday was Flag Day, so he gave $50 to the John Brown Veteran’s Memorial Scholarship Fund (of our local foundation).  We salute Ray for this reminder.

Steve Marburger yacked and kayaked his way on a trip to Oregon and gave $50 toward his wife’s Paul Harris Fellowship.

Kim Graves is a new grandmother (who would have guessed!?!)  when her son and daughter-in-law had a baby.  For that joy, she allotted $100 to her Paul Harris Fellowship.

Past President Kathleen Archer said her daughter has a new job in Washington DC and that it warranted a $50 donation to the Legends Scholarship Fund  of our local foundation.

Kim Murphy kept her head up and decided it was time to finish her husband’s Paul Harris Fellowship, so she tied that down.

Past President Norm Owen wanted to and did support the Legends Fund of our club foundation for $50 on behalf of late Rotarian, John Downey.

Dr. Shari reached out again to support Rotary International by adding another $70 toward a Paul Harris Fellowship.

Jackie McMillan introduced Tony Fisher to us, the marketing director of the Healdsburg Senior Living Center.  The topic was the changing landscape of senior care, both here at home and in China, where Tony recently visited to consult on a new small city being planned to serve 22,000 seniors in retirement.

Senior care here is big business and it is even bigger in China, which has a staggeringly large population of seniors who are without at-home care options due to the Chinese policy of ‘one-child per family’ that was started in 1979. That policy caused a reduction of females being born and has now lead to a shortage of care workers.

Community care is the solution to a lack of individual home care options.  The purpose of group living is to provide assistance, care and activities for the seniors among us with the goal of enhancing their purpose, value and contribution  in life.  Tony described how that is done at Healdsburg Senior Living Center.

When Tony visited China as a consultant, he was overwhelmed with the scope of the project that will house 22,000 people in13 high-rise buildings on a 300-acre site.  It will be a logistical challenge to make it work, but the Chinese seem to be committed to the concept after visiting numerous senior communities here in the U.S.

President Doug loosed the lines and we all sailed back to our businesses, but not before he thanked all the crew at todays’ meeting.  Sail on down the line.  Ain’t it funny how the time can go. Sail on honey. Good times never felt so good.  Thanks Pres. Doug for all you’ve done to make us a better club!!