Our Program For July 10th (remember we are dark July 3rd):

Lynn Stauffer, Dean of SSU’s School of Science and Technology

Dr. Lynn Stauffer is the Dean of the School of Science and Technology and a Professor in the Computer Science Department at Sonoma State University. Dr. Stauffer will present an overview of the teaching, research and other exciting activities and programs going on in the School.

July 17: Peggy Soberanis will spend her 21st year in the Rotary Club of Santa Rosa as our new president. Her years as a member of this club should give an interesting depth to her State of the Club address.

July 24: Memorial Hospital’s marks it’s 53rd year in Santa Rosa. If your business is medical care, half a century is more than just a lifetime. St. Joseph president Todd Salnes, who arrived in Santa Rosa last year, will be our guest speaker.

July 31: The San Francisco 49ers haven’t been around since 1849 Gold Rush but they are moving into a new home. David Spath, the 49ers chief of security, will give us a little history and a preview of the new Levi Stadium.

You could feel the anticipation as spectators gathered in the amphitheater for lunch, followed by the debunking of President Bill. One could hear the muted rumble of the caged lions and tigers backstage, as fellow Rotarians and guests gathered for a rare glimpse of the almost-mythical William Rousseau in one of his rare public appearances. With a nervous smile on his handsome face, President William calmed the eager spectators and led us in the Pledge of Allegiance. In the final invocation of this Rotary Year, the gathering received what we all hoped to be the last quote of this Rotary Year:

“Dog Wisdom”
Be brave, no matter your size
Have a mind of your own
Dig Life and make your own fun
Be loyal and faithful but chase after your own dreams.
Take a nap. Never stop playing
Wag more. Bark less. Be quick to forgive.
Learn new tricks, no matter what your age.
Love unconditionally and make new friends.

We all welcomed Robert Mutert, an events producer from the neighboring Napa Sunrise Rotary Club.

Shannon McConnell raffle winner gets $10 for not drawing the Joker

Chip Rawson, who ran this week’s raffle, estimated that this week’s jackpot continues to grow ($226 as of June 26) as the odds of winning continue to improve as the loser cards are discarded from the velvet bag. Chip showed no sign of amazement when Red Badger Jane Duggan’s number was drawn for the second week in a row. In a gesture of mother/daughter support, Shannon McConnell made the draw and came up with the Jack of Diamonds. Unbiased observers were unable to see if they split the $10 consolation prize or not. Congratulations to Jane for two weeks in a row of semi-good luck. With no Rotary meeting next Wednesday due to the 4th of July Holiday, you can be sure that the Raffle Jackpot will be safe from any more “Red Badger’s Green Luck” until the next Rotary meeting on July 10th.

Last week, The Santa Rosarian reported on some trivial golf competition between President Bill and Steve Olson. In one of his last gasps as president, President Bill wanted to set the record straight. He corrected the story with his version of events:

With weather forecasts for next weekend remained sunny & dry, with temperatures into the 90s, Penny Tibbetts remains cool and calm after another week of no bad news, health-wise,

and your online social networking skills: With the first weekend in July the drop –dead date for rider registration for the Third Annual Giro Bello, you and your friends, business associates, and relatives are desperately needed to prove once again what each of us can do for our Rotary Club’s largest fundraiser through the power of online communication now! We have solid proof that it works. We didn’t try it in 2011and the first Giro Bello barely succeeded. We used this remarkable power in 2012: Twice as many riders registered the last two weeks; Giro Bello generated over $50,000 & The Rotary Club of Santa Rosa supported the largest community service effort in recent history!! At Wednesday’s meeting, Carmen Sinigiani urged every one of us to compound our database this week Here’s how that works to benefit Rotary’s community service in Santa Rosa and the communities of Sonoma County: We know from experience that most of the competitive cyclists register the last few days before the next event.
These emails work:
Because it is simple multiplication: You email 10 friends asking them to send your same letter to 10 other people they know. If they do that for you, 100 more people will hear about Giro Bello and what the Rotary Club does for others. If the new recipients of the letter do the same, now 10,000 people have heard about Rotary and our “Beautiful Ride”. Duplicate that effort only one more time and we have told 10 million people about Giro Bello and the largest and oldest Rotary Club in Sonoma County Email this suggested letter to everyone for whom you have an online email address. If your friends are cyclists, so much the better, but not necessary for this to work. Don’t forget to say “hello” and “thank you”.

This sample letter informs others:
The Rotary Club of Santa Rosa is the oldest & largest Rotary Club in Sonoma County serving these local communities since 1921. This year’s annual cycling event, Giro Bello, features three beautiful cycling events through the hills and by-ways north of Sebastopol, all day Saturday, July 6th. For more details and complete information, visit the Giro Bello website http://girobello.com. Giro Bello is the Rotary Club’s major source of funding for dozens of programs, projects, local college scholarships & local schools’ support, including free dictionaries ever year to each 3rd grader in our schools.
Ask them to duplicate your efforts by forwarding your letter to at least 10 people they know in Sonoma County.

Matt Fannin apologized to all of us for being hacked recently and hoped profusely that no one forwarded their resources out of the goodness of his little Rotary heart. He donated $50 to our Rotary Club of Santa Rosa Foundation, just in case.

President William admitted what was already common knowledge that he had performed the nuptials last weekend for the wedding of fellow Rotarians Debra Smith and Ray Dorfman. All three swore that no money changed hands after the ceremony, but one does wonder if the rites closed with the familiar admonition, lightly revised, “What Rousseau hath joined together, let no man put asunder”?

Thank goodness that when Ryan Thomas confessed to “running into Terry Bradshaw” at the Mirage spa during his “business trip” to Las Vegas, he wasn’t speaking literally. President Bill asked Ryan what impressed him about the Hall of Fame quarterback for the Pittsburg Steelers; he said that he was “Huge!” Ryan’s $50 donation put another notch in his Paul Harris Fellowship.

Commenting that he and Jackie were celebrating a grandchild’s second birthday and the 40th wedding anniversary for him and Jackie, Don McMillan made a generous donation to the club’s Foundation.

Dan Walker picked a great time to benefit both his Paul Harris Fellowship and the Rotary Club of Santa Rosa’s Foundation, $50 to each for a ten day Kauai vacation with his wife Catherine, and family.

*Editor’s note: It is common knowledge that the participants in this presidential press conference have been under secret surveilance by unknown agents on behalf of REDACTED The appearance of all participants of this presidential press conference has been disguised by radical professional make-up. Any resemblance to any known persons, living or dead is purely coincidental REDACT REDACTE The official transcript follows:

The Debunking of President Bill:

Ms. Press Secretary addresses to reporters with rules for questions to the President

Past president: “Ladies & gentlemen, Rotarians and members of the Rotarian Press, we are about to begin today’s press conference—the last press conference of REDACTED Rousseau’s year. Now I call on Ms. Press Secretary”

Press Secretary: “Welcome, Rotarians and members of the Rotarian Press We are happy you could all attend President Rousseau’s REDACTED conference today. As I am sure you REDACTED there has been talk in the media and elsewhere about the REDACTED and we are taking steps to make sure that this doesn’t get out of hand. You’ve all been given the list of approved questions as well as a list of questions that are strictly REDACTED. In order to make sure that you comply, we have instructed NSA to create a dossier on each & every one of you. We’ve tapped your REDACTED lines, Twitter accounts, even your Face REDACTED. Do not forget, thanks to our drones, we know REDACTED where you live.”

President Bill tells everyone how great he is and reads a script written by his wife.

President Bill’s fraternity brothers show up to support him

Reporters ask questions of Bill, focusing on his frequent trips to Hawaii that he claimed were official business trips 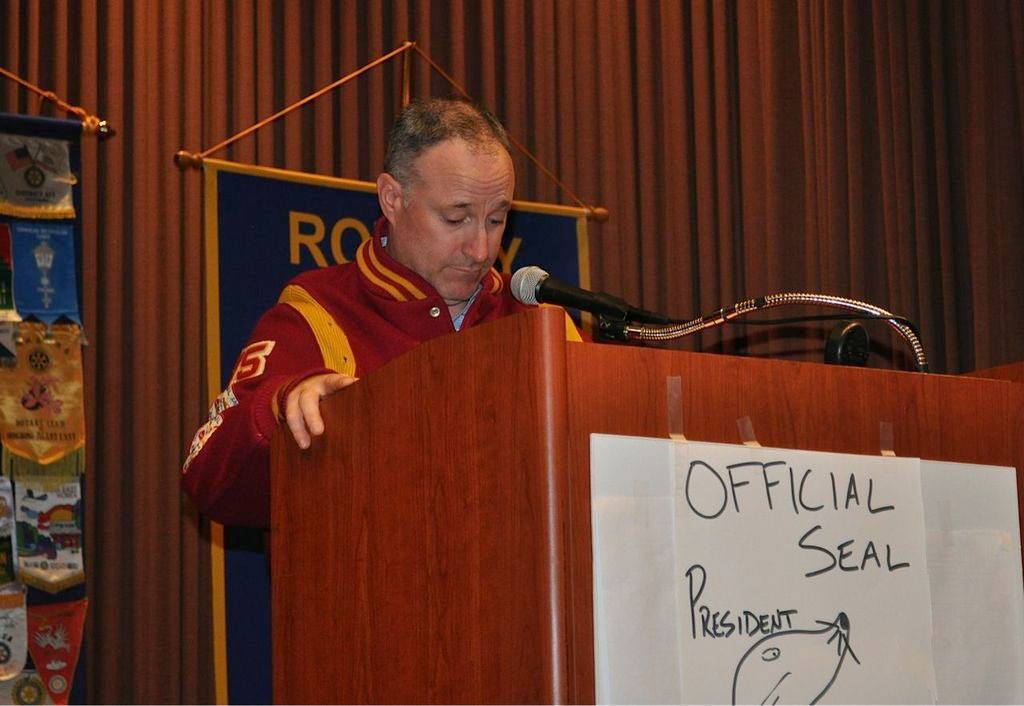 President Bill dodges the hard questions, just as any politician would do.

Editor’s note: Part of the crowd rises to their feet, clapping their REDACTED and cheering several times, ‘One more year!’ Ect. ect.ect. The other half of the room sits, stunned, then starts to shout REDACTED REDACTED then repeating guardedly REDACTED. REDACTED.
The room goes dark as the crowd noise continues to increase, then suddenly deathly silence. In the background, a single voice is heard over the all-to-familiar sound of a helicopter taking off. “What do you mean he didn’t show up for his press conference? You’re telling me he’s en route to Hawaii for another peace conference? Not again!!”