Susan Brints and husband Cal are members of the Metropolitan Lubbock Rotary Club, and Susan has 16 years of perfect attendance in Rotary and looks forward to serving D5730 as District Governor year 2016-17.    Susan has served as Assistant District Governor in District 5730 for Area 6, is Past President of her Rotary Club, has served on numerous club and district committees, is presently serving on the district and club Rotary Youth Exchange Committees, and serves the district as Global Grants Chair on the Foundation Committee.

Shuffle’s Magical Ice Cream Shoppe: JP and Cammie Scirica came today to tell us about their 6 month old ice cream and magic shop located at 528 7th Street, Santa Rosa. It is an ice cream store and magic shop all in one. JP has worked in retail, but you can tell he has a passion for magic. He did a little magic show for us that was quite fun! Cammie has a background as an event planner. She is also a daughter of a Windsor Rotarian and participated in Youth Exchange. The ice cream is made on their premises and they make many flavors…some a bit eclectic like chocolate and bacon or lemon and rosemary. They do kids magic shows on Saturday mornings. They have dinner performances for adults. Please check out all their events at www.shufflesicecream.com!

President Mark was in a giving mood and gave everyone with a funny hat or great looking tie some Rotary bucks: Jackie McMillan, Don McMillan, Fred Levin, Craig Meltzner, and Wally Lowry.

THE SECRET GREETER IS BACK!

New member, Kim Graves, was the secret greeter today. Her winner was Layne Bowen, but he snuck out early! So Kim gave the award to Steve Marburger.

Dr. Shari from Guatemala and Shawn Hetherman from the Valley of the Moon club.

Santa Rosa Rotary: Who were the early “movers and shakers?”

Editor’s Note: While cleaning out our club’s storage locker, President Mark found a cornucopia of historical information about our club from the mid 1920’s. The first two articles highlighted some news articles in the Press Democrat. This week, we look at the early members of our club. They were truly the “movers and shakers” in Santa Rosa. Moving forward, we will feature news articles and excerpts from Board minutes from the same month, 90 years ago.)

There were approximately 65 members when this list was assembled. We have edited it down, including primarily some of the well-known historical figures in Santa Rosa, and some less well-known men who will pop up in the Board minutes during future installments.

….who’s number did we draw? A bit of confusion on today’s drawing. Nick Knickerbocker and Dr. Shari both had the number? Well, neither got the right marble so the pot continues to grow. 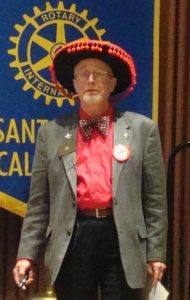 Today was our own President Mark. He is back in business as Advent Furniture…your source for complete office furniture. So if you or anyone you know needs office furniture, give him a call.

Rich de Lambert brought Kerrie Chambers back. She is now with Citibank. Julia Parranto brought Steve Baime (he will be attending a Rotary Informational this week). Steve Marburger brought Richard Lazovick (and he has turned in his application for membership).

HAPPY DOLLARS BRING OUT THE CONFESSIONS

Julia Parranto bought a new car….Don McMillan and Jackie McMillan are going to Virginia…Blaine Goodwin is going to Ireland for 3 weeks…John Poremba is going to Paris for a month…Shannon McConnell got a new car and gave her current car to Jane Duggan….Mike Kallhoff bought a new home….Cathy Vicini says that in all her years as a family therapist she had never seen a flasher until today…..thanks to Don McMillan.

“What is crucial not only for our children, but for all children?” Read article on page 25 to find out!

Debi Zaft is putting together a social for Thursday, April 16th at Kunde.

Yale Abrams needs volunteers to do some gardening projects at the Laguna de Santa Rosa on Saturday, April 11th from 9:00 to 12:00; to be followed with a pizza party!

Jackie McMillan is looking for volunteers to stuff bags for the dental program called Mighty Mouth. It was suggested that we could do this at a meeting sometime.

President Mark announced the bocce ball tournament for May 30th. We can have 3 teams and there will be a barbeque too.

Jose Guillen gave us a fitting invocation for April Fool’s Day: When life gives you lemons, you make lemonade…but find someone with some vodka and have a party!

Steve Olson opened the meeting with the Pledge of Allegiance and then President Mark rang the bell, welcoming all to the Rotary Club of Santa Rosa…where Fellowship and Service Come Together.

All in all, a fitting April Fools Day meeting for our club!