Each year our club honors an outstanding police officer and fire fighter from Santa Rosa.

This year, our Club  has announced that we will be adding the Sheriff’s Department to the festivities, and we will now also  honor an outstanding deputy sheriff.

Back in June 2016 Jeff Brown was the engineer on a truck that was called to a house fire on Nebraska Street in Santa Rosa.  The house was totally in flames.  The homeowners had stored ammunition in the garage and it was going off; making it even more dangerous to the firefighters.  Plus the electrical wires were down in the street. Jeff Brown was the Tillerman this day so his job was to break down the door and make sure to get any people in the house out safely.  He was told someone was still in the house.  He did get in, but the person was already deceased.  Because it was truly a very dangerous fire and he went in to attempt the rescue, he was voted by his peers for firefighter of the year.

Jeff Brown was first a paramedic in San Francisco before he came to Santa Rosa in 2002.  He has taken his time to rise in the ranks as an engineer because he enjoys the work so much.

Officer Denise Stebler was first on the scene for the same fire.  She saw the smoke while out patrolling.  When she got to the house it was already engulfed in flames.  A van was burning in the driveway and the ammunition was going off in the garage.  She got around to the back of the house and could see someone inside.  She was able to open the back door and grab the woman as the kitchen window exploded!  The woman survived with singed hair and minor burns.  She would not have survived if Denise had not arrived when she did.  For this reason her fellow police officers nominated and selected her as police woman of the year.

Denise Stebler joined the force in 1997 and was a patrol officer and canine handler.  In 2016 she was fluent enough to become a bilingual officer and has joined the hostage negotiation team. 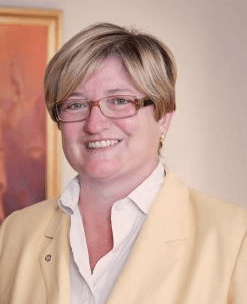