Tom Kendrick was a California sea urchin diver for 22 years. His diving career originated from his search for secret surf spots at the Channel Islands, and took him from Santa Barbara to Mexico, Oregon, Washington, Alaska, northern California, and the shark-infested Farallon Islands.

Copies of his book will be available for Rotary price of $15.00.
“An unforgettable window into a life filled with huge rewards and crippling loss.”
— Christina Slager, Monterey Bay Aquarium

Sure to enthrall, we have designated this Bring a Guest Day.

Pledge: Yale Abrams
Invocation: Yale pulled double duty and did the invocation, sharing a joke that warned us not to put all our Easter Eggs in one basket.

Charlie Howard-Gibson likes us, though, he returned to our little meeting representing the Boys Scouts of America. Welcome back, Charlie! El Presidente welcomed and reminded him “mi casa, es su casa”

El Presidente reminded everyone that today is our club assembly. Also upcoming is the Rotary District conference at Lake Tahoe on May

12th.  Elizabeth Karbousky and The Social Committee announced that the next social will be held at Jack Atkin’s house in Kenwood on Thursday, April 20th from 5:30 -7:30. Carpooling is encouraged due to limited parking space.

We were saddened to hear that Peter Holewinski lost his mother. He was back in Wisconsin and presumably with her when she passed. Our sympathy to you and your family, Peter.

Hosted by Tim Delaney. Tim must have pocketed some of the funds because he was only offering $28.00 to the person who draws the winning marble. Karen Ball won the honor of drawing a marble, but it was the wrong color and walked away with a mere $10 consolation prize.

Kim recognized those Rotarians who were born in the month of April with the help of El Presidente who serenaded the birthday señores and señoritas and/or señoras with a passionately sung Spanish birthday song.

El Presidente took a couple of polls (until he got the answer he wanted) regarding whether or not person’s whose numbers were drawn needed to be present to win. Using a jury selection box he stole from the tax payers, he drew numbers as Debi (Vanna) Zaft helped at the board to award a variety of prizes, starting with moose poop won by Don McMillan and culminating with the $1,000 Instant Paul Harris winner: Rich de Lambert!

First up was Ann Gospe who with the technical help of El Presidente showed us a tutorial on SignUpGenius. Use this to sign up for duties at our club’s biggest (and only) fundraiser for the year. We need 100% participation to make this year’s event a success!

Steve Olson then shared a presentation on the Foundation and Board of Trustees. The Foundation provides scholarships, grant money and manages “pass through” funds for our club. The corpus has grown over 28 years to nearly 1.5 million today!

Will Haymaker and Kerrie Chambers gave a presentation on Membership. They shared ideas and recruitment and maintaining membership to our club. Ideas include: eliminating fines, regular social events, interesting programs and staying close to our members through regular contact. Human connection appears to be the key in attracting and keeping quality members. 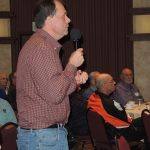 Casey D’Angelo shared the NewGen Peace Building Program which is in its 2nd year. This year 21 students from 7 area high schools are participating. Projects they are interested in pursuing are homelessness (locally) and they also want to do an international program of some type. One idea being discussed is something to do with removing landmines that are still scattered around many countries after years of war.

The Christmas program committees help both the young and old enjoy a happier holiday season. Steve Marburger described the 20 year old program providing an opportunity for under-privileged kids to experience The Nutcracker, preceded by a meal and a gift.  For that entire time,  Tim Fawcett has appeared as Santa Claus!

There must be some kind of Rotary pin or something for that!  Kim Graves then presented the Poinsettia Program that serves seniors at Vigil Light with a party with Christmas carols, cookies and of course, poinsettias! This brightens their holiday spirits and offers us another opportunity to make someone happy.

Jackie McMillan heads the Program Committee which in reality is everyone in the club. Do you know a captivating speaker or have an idea for a great program? Let Jackie know and get involved!  Jackie tries to balance a variety of programs, some informative some entertaining but always interesting.

Finally, World Community Service, headed this year by Peter Holewinski has a budget of 16K which has been leveraged by partnering with other clubs for global grants for a variety of programs on several continents.

David Berman’s membership application has been approved by our Board.  David does Agribusiness Consulting.  His name will be published as required by our bylaws.  Court Administration is happy to recommend him.