THE POWER OF ROTARY: DOMESTIC VIOLENCE

Peg is in the yellow shirt with a group of Rotarians from Santa Rosa Clubs and Sebastopol Clubs helping with clean up after the fires at the YWCA therapeutic preschool for at risk kids, near Coffey Park.

Peg Rogers, wife of District Governor Bob Rogers, will join us on April 25th to speak about a topic very dear to her heart. With a Masters Degrees in Education and in Psychology, Peg’s professional career includes working with distressed youth, promoting educational programs that empower youth and giving them the tools for success, starting with peaceful relationship skills and positive self-awareness.

Her Rotary career started less than 2 years ago after hearing a woman’s Domestic Violence survival story at the Rotary International Convention in Seoul, Korea. She returned home to Sebastopol, joined Rotary and immediately formed a two club Domestic Violence/Family Safety committee to begin making a difference in our community.

Rotary clubs can do much to further two of Rotary International’s six areas of focus:

First, Maternal and Child Health, (Surgeon general and CDC have said that Domestic Violence is the number 1 health issue in the U.S.)

Second: Peace and Conflict resolution, developing positive relationship skills and peaceful methods for problem solving, alternatives to violence in the home and at school.

Pledge:  Yale Abrams
Reflection: Chip Rawson reflected about being wrong and asking for forgiveness.
Which is more divine, to ask for forgiveness or to forgive?

Bob Hirsch from Sebastopol was in attendance at our little gathering today. Welcome, Bob!

Dave Berman introduced Celine, his better half for the last 40 years. Sharon Dougherty was also a guest.

Debi Zaft was back today, for which we are all grateful. Welcome back, Debi! Former SR Rotarian and past president, Ray Dorfman is suffering poor health down in the Palm Springs area. Please keep him in your thoughts. If you’d like to send a card or a note of encouragement, his address is:

Dave Berman gave his craft talk free of visuals and other bells and whistles. Dave explained that he joined Rotary to better connect with people in his local community. After leaving his banking job working with agricultural clients which required lots of travel, Dave is enjoying getting to work with, and getting to know his fellow Rotarians. He has already volunteered to work events and introduced us today to his lovely wife Celine.  We’re glad to have you in the club, Dave!

Rotarian of the Month

Julia had this idea after the fire to hold a raffle to raise money to help our community members who lost everything in the firestorm. The raffle was held on April 9th, the 6 month anniversary of the fire. When she asked for a volunteer to run the raffle, Ray Giampaoli raised his hand. The raffle was a success largely due to Ray’s efforts. For his work taking on the Fire Relief raffle fundraising, Ray Giampaoli was awarded Rotarian of the Month. Congratulations, Ray!

I hope the basketball off season is treating you and your family well. I just wanted to reach out and tell you something amazing that Cade did today. I shared with my 3rd period class today (out of exhaustion and warning not to push their luck on this particular day) that I was having a miserable day. Between personal and professional things, it was just one of those dreaded days. After class, Cade comes up and asks me to “settle a dispute” for him. He asked me which French fries in town were the best. … I told Cade that In’N’Out had the superior fries in town by a country mile. He kind of mumbled a thank you and went about his way out of class when the bell rang. About 30 minutes later, I got a call from Cade and he asked where I was because he had something for me. Never once did I expect what the “something was” but I told him I was headed back towards our classroom and I’d be there in about 2 minutes. When I turned the corner towards our room, I see Cade standing there with a bag of In’N’Out fries and a Guyaki energy drink. I am rarely speechless but this sincerely caught me off guard. Cade gave me the bag, gave me the drink and said he hoped my day got better. I got legitimately choked up. I thanked him profusely and then another teacher interrupted us and Cade walked away. …After Cade and I parted ways and I finished talking with my colleague, I went in my room and broke down for a minute. A mix of gratitude, exhaustion from the day and just amazement. You two have sincerely raised an amazing young man. This is the type of thing that you can’t teach as a coach or as a teacher…in my opinion it’s ingrained in the example set by and expectations from their parents.  …. 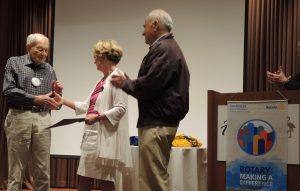 In 1964, the US began its involvement in Viet Nam in earnest. In 1967, with a degree in Food Service Management and seeking a warm weather winter home, Angel enlisted in the Air Force when a cute recruiter said he’d send her to Texas. After time in San Antonio, Angel was then sent to Omaha, not exactly a warm weather place in winter. Later she was sent to Seville, Spain to work in an officer’s club. Next stop was Bitburg, Germany where she spent two years. After

hearing stories from pilots about Viet Nam, Angel volunteered to go there. She was assigned to a base in Thailand. Upon arrival, she discovered the officers club was basically a strip joint. She chose to support morale rather than morals and left it as it was rather than try to change the culture. Angel shared a photo of the last flying aces in history, who flew out of the base to which she was assigned. The officer’s club, in her honor was renamed “Angel’s Truck Stop”.

Upon returning from SE Asia in 1972, there was little interest in her experiences. It wasn’t until the 80’s that people started asking about her experiences. Angel shared the trials and tribulation of writing a book. Angel donates 10% of the book profits to land mine removal.

So far 18 Rotarians from our club have signed up for the Rotary cruise on AMA Kristina. There are only 31 cabins remaining. If you are interested in joining us, please book as soon as possible to get the best cabin category.

Click here to get more information on pricing, itinerary, etc. Printed fliers are also available at our meetings. The early booking discount still applies but will expire at the end of April.