Robert Stewart is the current District Abuse Prevention Coordinator for Rotary District 5130.  He is retired Chief of Police for the community of Cotati.

Robert will be providing Youth Protection Awareness Course training to our club members on April 26th. This training is required by ALL Rotarians who may or will have one-on-one contact with youth in a Rotary context – in other words all of us.

Please make every effort to attend this meeting.  Rotarians from other clubs are welcome to attend.

None present for this meeting.  This seems to be a trend.

Nothing to report today. All is sunny in Santa Rosa. 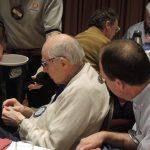 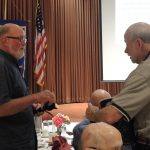 Hosted today by Ted Wilmsen. Steve Olson’s ticket was drawn for the $44.00 raffle but Steve picked an unlucky marble out of the bag and walked away with the $10.00 consolation prize.

Dan Schell helping with the Sergeant of Arms duties

August 13th through the 16th is Pedal for Polio, a fun ride from Crescent City to Petaluma to raise awareness to eradicate polio throughout the world.  This will be our incoming District Governor’s primary goal for his year.

The Rotary Friendship Exchange offers an opportunity to host a family from India on Memorial Day Weekend.   If you are interested, please contact Rick Allen or Tim Delaney.

El Presidente welcomed Cathy Vicini back from recent surgery and asked if she had a joke to share. Cathy deferred to Dan Schell who told not one, but two absolute groaners. Cathy did mention that at Trecini Wine Tasting Room, she is using National Bike Day for promoting Giro Bello. 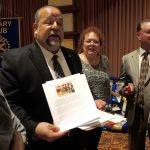 President Jose calling a quick Board meeting to get business done in an expedient manner!!

Community Service Committee has been approved. He also requested volunteers to help with El Presidente Jose’s debunking to be held at the Flamingo on June 28th at 5PM.  El Presidente tried to bribe Doug with a nice bottle of wine to keep the debunking nice.

Finally, El Presidente reminded those interested in attending the dinner following the life celebration for Robbie Chase on Saturday, April 29th  to let Doug Chase or Bob Sorensen know, so they can get a head count.

New Gen Peace Builders graduation will be held on Saturday afternoon, May 20th at Village Elementary School.  This will be a public event to unveil the NewGen students’ peace projects.

At this point the PowerPoint gremlins took over, so I’m not sure how to report what Jose was trying to share, but I’m sure it was important! 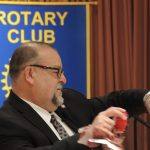 Rick de Lambert, Sergeant at Arms, started the fining with $25 imposed on El Presidente, just because!

Kim Murphy along with DeWayne reported back on their wonderful trip to Spain. They were very impressed by the historical sites and presented El Presidente with a couple of sweet ceramic bowls. 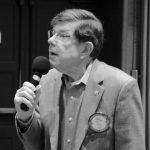 Roy Thylin returned from a trip to England where he visited his son. He confirmed that England still “swings like a pendulum do” and donated $50 to the club and $100 to the Foundation.

Diane Moresi has a new granddaughter, Emmy who weighed in at 8lbs., 12oz. upon arrival. Diane started Emmy’s Paul Harris with $100. 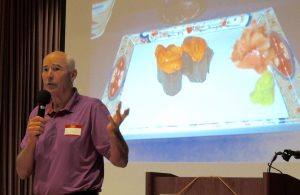 Will Haymaker introduced Tom Kendrick, an Oakmont resident with a story. Many stories, actually. Tom spent 22 years “swimming with the fishes” harvesting sea urchins and getting to know other much larger sea creatures on a rather personal basis. He shared photos of various types of urchins that he harvested from the reefs by hand. Tom described the process of harvesting and shipping urchins to the Japanese market. Tom was raised in Hawaii and then Santa Barbara and described his life growing up as a surfer. While looking for big waves near the islands off Santa Barbara, Tom was introduced to urchin harvesting.  He soon bought a boat and became a professional urchin diver. He then followed the blue water gold rush to the Mendocino coast, then the Farallon Islands where the water is clear, urchins are many and so are the great white sharks. Tom described his years hanging out with larger than life characters and later after writing his book, meeting many of his heroes in surfing as well as authors and movie stars. 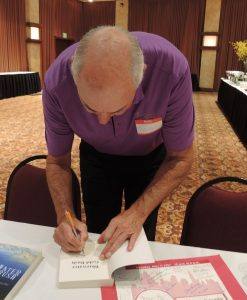 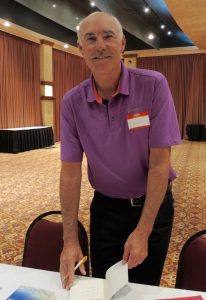 David Berman’s membership application has been approved by our Board.  David does Agribusiness Consulting.  His name will be published as required by our bylaws.  Court Administration is happy to recommend him.