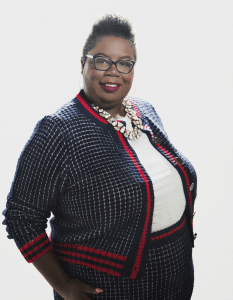 Malia Anderson is a nationally recognized personal stylist, body positive activist, public speaker and writer.  At speaking events throughout the country, Anderson conveys her true American success story. On May 3 she will share her experiences as a female entrepreneur with our club, and how the traumatic events of her childhood have led to her successes as an adult.

Her company, Style by Malia, is a go-to for powerful women throughout Northern California and her much-anticipated personal lifestyle blog, Malia Anderson: My Life Styled, is about to be launched. Recognized by the Sonoma County Economic Development Board ‘s “Year of the Entrepreneur”, Malia’s journey will be sure to inspire. Ann Gospe, formerly of that office, will be our speaker’s host for the day.

We had two visiting Rotarians today. Guest Speaker Bob Stewart and Greg Freitas. Greg took the time to come to our meeting to announce that he is looking for Rotarians in Santa Rosa to host a couple from India over the Memorial Day weekend. This is part of the District Rotary Friendship exchange program his Petaluma Club is involved with. Greg also requested 5-20 volunteers to help with his club’s Backroads Challenge bike event.

Former member Matt Everson was a guest at today’s meeting. Matt is currently a non-member volunteer for the New Gen Peacebuilders program this year.

Ginny announced that Joy Parker’s husband Bob had a stroke and is recovering nicely. He experienced some numbness, but fortunately, no loss of speech or other symptoms.

Hosted today by Karen Ball.  Jack Abercrombie’s ticket was drawn for the $550 million dollar raffle, but Jack couldn’t get lucky and walked away with the $10.00 consolation prize.

El Presidente announced that a moderated discussion on Measure C will be held on May 10th. He asked that you send your questions to ask the presenters in advance of the event and be sure to bring guests!

Doug Johnson announced that we need to continue to look for sponsorships AND riders! Our Giro Bello is only two months away. More promotion needs to be done and Doug has lots of real estate type GB signs for you to put up anywhere they will be seen by a large number of people.

El Presidente offered to let people off the hook at only $5-10 for any recent trips, recognitions, indiscretions, or transgressions. Strangely, though, people wanted to give him more money……

Carmen was called upon to describe her baseball trip to 3 parks with baseball crazy sons – $50 to the club! Norm went on a cruise to Ensenada and felt compelled to offer $100 to the club because he had such a great time. Queen Jeanne Levin seemed to be the only one willing to take advantage of Jose’s offer and donated $10 to the club for her new car lease. Jeff Kolin’s daughter is graduating from Columbia and has already found a job (every parent’s dream!) Jeff and his wife celebrated with a trip to Puerto Vallarta  and donated $100 to her Paul Harris.  Larry Miyano is celebrating semi-retirement and donated $50 to the club and $50 to his PH.  Jack Tolin celebrated a 3 STAR hotel experience with his daughter in Phoenix when she offered to buy tickets to the NCAA Final Four (with HIS credit card, of course!)

Should I say it? He had a great time with his daughter in spite of their crappy hotel room……He offered up $100 to his PH for that story. Don McMillan did Queen Jeanne one better and paid only $5 for his upcoming tennis comeback after 3 years on the DL.  Paul Hamilton thought it would be a good idea to take his grandchildren to Disneyland (what was he thinking????? – Just joking of course, Paul!) He paid $50 each for their Paul Harris funds.

Peter Holewinski is finally back  from Wisconsin and was awarded his belated Rotarian of the Month for March.  Welcome back, Peter!

Ray Giampaoli introduced today’s speaker Bob Stewart, a former multiple Rotarian of the Year winner in his RP club and former Police Chief of Rohnert Park. Today Bob shared with us information for working with young people in the community and specifically about certification that is required for the protection of both the young people and the Rotarians who work with them. Bob described the awareness training that is required for programs such as RYLA, youth exchanges, Interact, scholarships, and hands on service projects where young people are involved.

The training and certification is meant to protect young people from sexual, physical, emotional abuse and neglect.  Bob covered various aspects of working with youth, focusing on perception of others when working with young people. Allegations of abuse resulting from Rotary projects must be reported to the District Abuse Prevention Coordinator listed on the district website.

The following membership applications have been approved by our Board.  Their names will be published as required by our bylaws.  Court Administration is happy to recommend them.