Our Program For April 10th:

Next Wednesday’s Rotary presentation, arranged by Webmaster Wayne Rowlands, features one of the foremost experts on new manufacturing concepts known as “rapid prototyping”, “3-D printing” or “additive manufacturing”. This photograph is an actual shoe—a three dimensional solid object made from a model that exists only in digital form. Our speaker, Glenn Campbell, started out as a prototype machinist. At Jet Propulsion Laboratories he was chief of N.C. Programming for the Galileo spacecraft project and worked with NASA to build wind tunnels for the B1 and B2 stealth bombers. In the mid-80s Campbell helped develop the first Ballistic Particle 3-D modeling system.

Who was that strange fellow up at the podium? OMG! It is actually Rotary President William. Welcome back, Bill; some of us have been concerned that you might miss your debunking—less than three months away. At today’s Rotary meeting John Berto led us in the Pledge of Allegiance and Mike Kallhoff told us the classic story of the little girl doing her best to rescue thousands of starfish along the beach. When asked why, with so many starfish, she thought she could make any difference. She picked up a star fish, tossed it into the water and said, “I made a difference for that one!” As Rotarians, we do make a difference.

We all welcomed Rotarians from around the North Bay—Kristi Doden, a communications specialist  from Sebastopol, Laura Banvil from Vacaville Rotary, and today’s speaker, Ron Henderson, from the Rohnert Park-Cotati Rotary Club. Eric Van Cleve was welcomed from District 5130’s newest Rotary Club, chartered in mid-February. The Rotary Club of Glen Ellen-Kenwood meets on Wednesday evenings at the Wolf House in Glen Ellen.

Nick Knickerbocker introduced his special guest, his lovely wife Camille. Mortgage originator Ray Giampaoli has been Deborah Gray’s guest for several months, but this week he sat at another table and was introduced by someone else, but Darron Elliot sat next to—and was introduced by—Robert Pierce.

Penny Tibbits says that all is well. Nice to hear!

Red Badger Manuela Gonzalez announced that the raffle jackpot was up to $687 with two jackpot-winning Jokers and 36 other card in the purple velvet bag. After the second draw for the winning ticket, Robert Pierce was unable to find a joker and settled for the $10 consolation prize. Next Wednesday the jackpot will be higher and the number of losing playing cards is now 35!

President Bill spotted the March Rotarian of the Month on her way back to the office to work on tax returns and called her name just in time to surprise Vickie Hardcastle with the news that she was Rotarian of the Month for her hard work behind the scenes as Chair of the Rotary International Foundation and was recognized for her valuable work on our local foundation. She almost made it out the door before the standing ovation of her fellow Rotarians. Congratulations, Vickie, you really deserve the recognition! 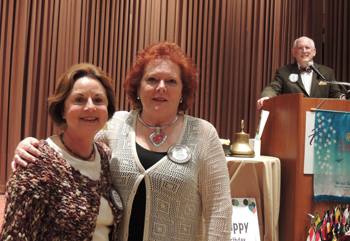 The crowd of birthday boys & girls of recent months was down to only three for April—Ginny Cannon, Gesine Franchetti, and Past President Debi Zaft. Gesine wasn’t here for the drawing. (Someone suggested that there must have been some boring Februaries 30 or 40 years ago). John McHugh decided to award a birthday gift to only one of the two ladies present and save the rest for a bigger crowd.

12 years of giving dictionaries to 3rd graders: President Bill read only a few of the letters we received from the third graders who received dictionaries from the Rotary Club of Santa Rosa this winter. The 12th year in a row that that Rotary volunteers from our club has distributed dictionaries to the 30 grammar schools that advance students into the five high schools in Santa Rosa. Every September since 2001 veteran Rotarians Ted Wilmsen & Sam McMillan call each school district for the 3rd grade student count. In early December fellow Rotarians volunteer as two-member teams that start tin early January to o deliver dictionaries to each of the thirty elementary school in the Santa Rosa school districts—Bellevue, Mark West, Piner-Olivet, Rincon Valley, Roseland, and Santa Rosa City Schools. By the end of January 2,000 third graders have received their very own dictionary…a gift from our Rotary Club. Ted and Sam estimate that’s 22,000 Santa Rose third graders who have been given their own dictionary in the past 12 years: $180,000 worth of dictionaries at no cost to Santa Rosa schools or taxpayers.

The White House honors 12 Rotary International members as Champions of Change for Service in the workplace, in our communities and internationally. You can access the R.I. website for more details.

For years, it has been rare that news about the Rotary Club of Santa Rosa receives any attention from local media. It is not rare however for known fellow Rotarians to be featured in local newspapers, columns, photographs, or electronic media. Most of us are active in social media however and you would think that well-known community leaders might mention to the media their personal involvement in our Rotary Club or Rotary in general, especially when it benefits our reputations and standing in the community. It doesn’t take much effort to bring your dedication to Rotary into your own media exposure. If you are interested in publicity, not only for yourself but for our Rotary Club, check with Jim Johnson, Club historian and Editor of The Santa Rosarian, for inside tips on publicity and public relations.

An offer you can’t refuse: Matt Everson upped the rewards for volunteering to help our fellow Petaluma Sunrise Rotarians with their Backroad Challenge bike event in May. Here’s the deal: (1.) Show up at 11 am, Saturday morning at Lagunitas Brewery in Petaluma. (2.) Drink free beer (3.) At 3 pm, drive home, carefully. If you think you can handle this tough assignment, contact Matt Everson ASAP. In return, our Rotary friends in Petaluma will help us out on Saturday, July 6th, at our great fund-raising event, the third annual Giro Bello.

Rotary Hospitality: Thank you, the French Group Study Exchange team that we host May 24 to 30th has three homes in which to stay. But Norm Owen announced today that they need one more home for a remaining GSE team member from France .Please let him know if you can help. This is a great opportunity to discuss great wines, in French!

Mark Burchill reminded all that Rotary Means Business meets on the 1st Thursday of every month.  Our April meeting was on the 4th ;  next month will be May 2.

Rebuilding Together. Yale Abrams announced a new project for the Hands-on Committee is happening this month, on Saturday, April 27th.  Volunteers will be working on a variety of projects at New Directions School on Stoney Point Road. And all skill levels will be needed and welcome, Yale commented.

Our always-busy past president, Debi Zaft, gave us two exciting announcements: (1.) April is Rotary Magazine Month. Please read your April issue of the Rotarian and sign the roster at our next meeting to be eligible for the prize drawing. (2.) Our next Rotary social will be Thursday evening, April 18th. The location is TBD, so if you have an available location she will be so pleased to hear from you.

President William reminded us that we can avoid being dinged for missed Rotary meetings by making up missed meetings online. Visit the club’s website for instructions.  Simple, easy, and an interesting experience.

Put your social media and communication skills to work on behalf of another successful Giro Bello cycling extravaganza. Now is the time—the date is only three months away on Saturday, July 6th. Help us spread the word about the 2013 Giro Bello by emailing all your friends, co-workers & family about the event. You know them best, so follow up your email with their favorite on-line media. For more information and a sample letter, access the email from our Rotary Club sent to you on April 2nd.  It’s easy, fast and effective! If you really want to go viral with Rotary’s Giro Bello, tap into the power of online compounding: Ask the people you know to forward your email to their contacts. Diane Moresi, Carmen Sinigiani, or Jim Johnson can give you more details. And thank you for helping make the Giro Bello a success.

President Bill was surprised that, while he was absent for three consecutive Rotary meetings, three expert past presidents—David Brown, Yale Abrams, and Marnie—had drained the Recognition Bank and zinged most of us in March. So he was stuck with leftovers and repeat offenders. However, Matt Everson confessed that he will be going to the opening day of the world champion San Francisco Giants. We all made notes to see how that turns out.

President William discovered a rare opportunity for our club’s finances—the appearance of two reliable old Rotarians, Chuck Bartley and Ed Anderson, both legendary past presidents who proceeded to play “Can You Top This”, an old radio game show that only Bartley and Anderson can still remember. Chuck Bartley, who joined this Rotary Club in 1956, claimed that Ed Anderson was here only because Chuck brought him to see if President Bill had indeed returned from vacation. But Ed, a newcomer who did not join Rotary until 1964, swore that Bartley was there only because he forced him to come along. After the familiar humorous banner, Ed magnanimously offered to donate $100 to the club. Chuck offered $101, “just because”. It was great to have enjoyed the performance and the humor of these venerable Rotarians.

THE ART OF DYING

Ron Henderson has been a funeral director since 1969 when he went to work for a Michigan mortuary while in college to pay his tuition & books. More than 40 years later, he shared with us his thoughts and observations on the loss of others, the importance of grieving to enable us to survive the disruption of death, and what he has learned from his

long dedication to his craft.

Funerals or burial rituals are probably older than human civilization, dating back 50,000 years, at least. The earliest evidence was found in a cave in what is now Iraq. All religions have some sort of ritual that goes along with death. Long ago ancient humanity recognized that grieving and the ceremonies that accompany the loss of someone is part of a process that is vital and important to the survivors so that they can get through the loss of their loved ones and begin healing that pain of loss.

All morticians spend years on special training in addition to other subjects that are part of a general college education. To become a qualified mortician they study anatomy, physiology, psychology, and law, in addition to a general college education. Much of the training involves years of practical experience. Mr. Henderson went into many of the details of his business and talked about ongoing changes in the profession. He emphasized  a number of times of the importance of planning ahead to ease the trauma involved the loss of loved ones ad, from his caring demeanor and remarks, comments, he exemplified the importance of empathy, listening to others, and remaining involved but without letting themselves get involved in the grieving process.