GETTING TO KNOW OUR YMCA

How well do you know the YMCA? Sure, you might know the song and perhaps your family learned to swim at the Y but CEO

Matthew Henry is willing to bet there’s a lot you don’t know.  Join us on August 9th when Matthew, a newer member of our Rotary club, will lead us through a fun-filled exploration of the Y, including the history, little-known

Prior to his current position, Matthew served as CEO of the YMCA of Pomona Valley for three years and was with the YMCA of San Diego County for 10 years.  From 2008 to 2013, he served as Executive Director of the Border View Family YMCA in South San Diego, where he built a new 32,000 square foot facility with his own two hands.

Matthew is a graduate of Columbia University where he spent four years as a sprinter on the track team and has a MA in Sports Psychology.  He and his wife of 17 years, Andrea, are the parents of 12 year old twins, Jonathan and Brianna.

Nona Lucas led us in the Pledge of Allegiance.  Chuck Wear gave us a quote from Barbara Bush for the new “Reflection.”  “You just don’t luck into things as much as you’d like to think you do. You build step by step, whether it’s friendships or opportunities.”

Tony Roehrick brought his wife Laura and daughter Tasha, Blaine Godwin brought the new captain of the Salvation Army, Rio Ray,  Michael Moore was a guest of Fred Levin (and he has turned in an application to join our club.  He is a previous member of Santa Rosa West). Alma Kelly was staying at the Flamingo and asked to visit our meeting.  She is a Lion Club member in her home town, Joe Aaron our guest speaker and Tommy Abel  our out-going exchange student.

President Julia (don’t call me Julie) played a promotional video provided by District Governor Bob Rogers on the upcoming bicycle ride.  He has suggested a pledge of  $ .10 a mile ($35.00) toward your Paul Harris Fellowship.  If everyone in the district did this, that would be $84,000.  With the matching money from the Gates Foundation that is $252,000!  The video also featured Dennis Ogbe a champion Para Olympic athlete who had polio as a child.

Former District Governor Bruce Campbell was here to induct Tony Roehrick into the Paul Harris Society.  This group of Rotarians has pledged $1000 a year to the Rotary Foundation.  Tony says that he signed up online for an $85.00 a month pledge and it is taken out of his checking account on a monthly basis, Easy-peasy!

Jose is back.  It appears that he may have had a minor stroke.  He’s doing fine.  Former member Sandy Handley is fighting colon cancer.  Linda Levar (Jack Levar’s wife) is on the mend.  Wally Lowry is out of intensive care and in acute rehab at Memorial. 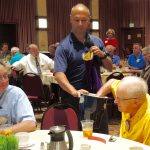 Matthew Henry said we were back to 10 marbles and $21.00 in the pot.  Bob Sorenson had the right number but he did not pull the right marble.  There was a second drawing for fair tickets.  Roy Thylin won the tickets.

JOKE OF THE DAY:

(Let’s see if I can get this right).  Two nuns went into a 7-11.  It was a hot day and the one nun said to the other, “I really would love a beer, but I suppose that is not possible.”  The other nun said, “You want a beer?  Leave it to me.” She picked up the six pack of beer and took it to the cash register. “We use the beer for washing our hair.” The clerk bent down and pulled out a bag of pretzels from behind the counter, “Here ladies, have this bag of hair curlers.”

Matthew Henry was one of those homes in Windsor that had fire retardant dropped on his home last week by the tanker flying into the Santa Rosa Airport.  It turned his home and yard into a lovely shade of pink!  He joked that his house was now protected from fire for a couple of years.

World traveler, Jack Atkin, just got back from and African safari, a visit to Eva’s family in Switzerland, and a riverboat cruise down the Danube River (your editor is soooo jealous!).

Robert Pierce got some free tickets for Broadway Under the Stars and gave a donation toward the tickets.

Richard Lazovick had a run-in with a deer in his back yard.  It literally jumped over him to escape!

Dave Berman is in charge of the Santa Rosa rest stop that is conveniently at the August 19th bocce ball tournament.  He is in need of help for the rest stop.

Don McMillan says that the Rotary club of Saint Andrews in Scotland has a golfing event at the golf course on June 23rd 2018.  Anyone want to go and play?

Ray Giampaoli wants to know who in our club is a veteran.

So what is an economic futurist?  Someone who tries to identify future trends and figure out how they will impact the economy.  He 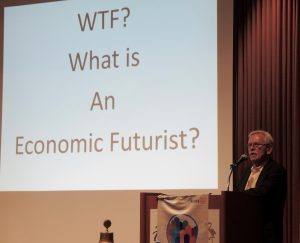 referred to Moore’s Law which has something to do with looking a linear growth vs. exponential growth.  Economic futurists will look at political, economic, societal, technology, environment and legislative  trends.

In this case he used the car as an example of what is likely to happen in the future.  It hasn’t been that many years ago when no one heard of a hybrid car.  Now we have electric cars, self- driving cars are soon to be available.  Cars are changing so fast that it may be in your best interest to lease a car vs. purchase.  Gas may never pass $60.00 a barrel again.  Countries like Russia, Saudi Arabia, Iran and Venezuela that depend on oil for their economies may head for rapid decline.  Children born today may never have a driver’s license; never drive a car.  What do you think about that?

ROTARY SOCIAL, BROADWAY UNDER THE STARS:

At least 20 members of our club with friends and spouses joined other Rotarians in Glen Ellen Friday night for a wonderful performance.  There were food trucks to choose from for dinner.  Several wineries were pouring wine.  The weather was lovely.  A good time was had by all!

Michael Moore  has submitted his application and is being considered for membership.