Once again it is going to be a fun time as we all participate in a wonderful time playing Trivial Pursuit led by our very own Ray Dorfman. Bring family and guests to this fun event. 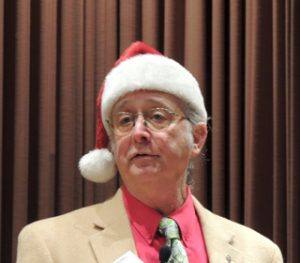 President Mark Burchill rang the bell and the pledge was led by Don McMillan. Mike Kallhoff then shared a 4 Way Test invocation.

Don McMillan skillfully presided over the raffle today, which contained a pot of $353. The lucky ticket belonged to Dick Jenkins, but Dick missed out on the big payout and had to settle for the $10 consolation prize and his “closest to the pin” winnings at the rowdy table.

Carmen Sinigiani shared some information about her business. Carmen is a partner in the law firm DeMeo, Demeo & West. Carmen specializes in trusts, trust litigation and estate planning.

A LITTLE FUNDRAISING BEFORE THE MUSIC……..

The program today was a concert by Sonoma County’s premier men’s chorus, The Redwood Chordsmen, that happens to have our own Dan Schell as a member. The group entertained us with a number of Seasonal songs, even one that was an adaptation of a Beach Boys song.

The Chordsmen meet on Wednesday nights and are open to new members who’d like to stretch out their vocal chords and join in the sweet harmony. Meetings are held at the New Vintage Church at 3300 Sonoma Avenue.

Mark thanked the following Rotarians for their help at today’s meeting: