SSU Basketball head coach Pat Fuscaldo and Frank Scalercio, the SSU Director of Development for Athletics will be our speakers on February 22nd.

Pat Fuscaldo, who returns for his 23rd season as head coach, became the winningest basketball coach in Sonoma State history in 2007-08 and is currently the dean of Men’s Basketball coaches in the CCAA. In 2005-06, he led the Seawolves to their first ever California Collegiate Athletic Association championship with a 16-4 conference record. For his efforts, Fuscaldo was voted the CCAA Coach of the Year by his peers. He received his B.A. in 1983, and later his Master’s Degree in Physical Education/Sports Psychology-Administration, both from San Francisco State. He is married to former Stanford All-American and ABL player Molly Goodenbour, now the head women’s basketball coach at the University of San Francisco.

Frank Scalercio is a 1978 graduate of Montgomery High School, where he lettered in football, wrestling and track and field. He played football for SRJC and U C Davis, receiving All Conference honors.   After graduation, Scalercio coached one year at UC Davis and then moved to Sonoma State, first as an assistant coach, then head coach from 1993 until the program was discontinued. He recruited and coached former NFL great and Hall of Famer, Larry Allen.

As Director of Development for Athletics, Frank has been charged to develop an Alumni, booster and friends of SSU organization known as the Sonoma State Athletic Association. The mission of this organization is to provide both moral and financial support for intercollegiate athletics at Sonoma State University.

The pledge was delivered telepathically from the absent Judy Glenn through the mouth of Debi Zaft.

The short but sweet invocation was delivered by Carolyn Fassi.

Julia Parranto introduced her friend, and a former Rotarian Cate Steane.  Other guests present for the Rotary High School Outstanding Student recognitions were:

Twenty something Yankee dollars were at stake when Ted Wilmsen drew an unlucky marble. He still walked away with $10. (presumably Yankee.)

Jeff Gospe introduced Chloe Bodin our exchange student from France. Chloe shared photos of her family, told us a little bit about French culture and some French history. She attends Santa Rosa High. Once a Panther, always a Panther! Chloe has travelled to LA, NY and Hawaii during her year in the US. Chloe obsessively takes photos of license plates from different states.

Ryan Thomas shared the history of the outstanding student recognition awards at our club. For many years, our club would recognize one student from one high school at each meeting, but a few years ago , it was decided that students from all nine local high schools should recognized at one meeting.  The students honored today were: 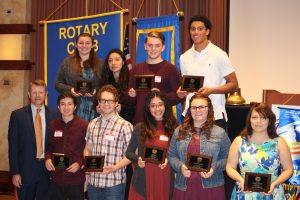 *Special thanks from the Editor to Kris Anderson for handling ALL the bulletin writing duties for the past 2 months while I was recovering from eye surgery. Thanks, Kris!”

“Education is the most powerful weapon which you can use to change the world.”