LandPaths’ mission is to foster a love of the land in Sonoma County.  Craig Anderson, its Executive Director since 1997, will be our speaker on February 28th. He will share with us how LandPaths creates ways for people to experience the beauty, understand the value, and assist in healing the land in our local communities.  Much of the Sonoma County based nonprofit outreach is with traditionally underserved populations.

We will learn about public outings to LandPaths’ own “community hubs”, and other properties protected by the Sonoma County Agricultural Preservation & Open Space District, and how our Rotary Club may assist in some ongoing volunteer stewardship projects.

Craig speaks annually to international audiences at the Land Trust Alliance and was chosen by Bay Nature Magazine as its 2014 “Conservation Hero”.  He lives in Santa Rosa with his wife (and LandPaths associate director) Lee Hackeling and their two children.

Trips offshore to fish from a kayak, hunt nonnative hog and turkey, his front-yard farm and playing music in the “Sonomacana” band Cahoots, help Craig find balance among the passion of community conservation work.

Carolynn Fassi, introduced Sukie Stanley, related to Dr. Jonas Salk, who developed the Polio vaccine.  In his honor, they both donated to our Rotary Polio Plus fund.

Jose covered for President Julia who is a bit under the weather, having lost her voice. Ginny reported that other than that, all is sunny!

Rich de Lambert had the right ticket, but the wrong marble.

Charlie was installing a new door and found that one of the hinges was missing.
He asked his wife Mary if she would go to Home Depot and pick up a hinge.
Mary agreed to go. While she was waiting for the manager to finish serving a customer, her eye caught a beautiful bathroom faucet. Then the manager was finished, Mary asked him, “How much is that faucet?” The manager replied, “That’s a gold plated faucet and the price is $500.00.
Mary exclaimed, “My goodness, that’s an expensive faucet — certainly out of my price range.”
She then proceeded to describe the hinge that Charlie had sent her to buy. The manager said that he had them in stock and went into the storeroom to get one. From the storeroom the manager yelled. “Ma’am, you wanna screw for the hinge?” Mary shouted back, “No, but I will for the faucet.”  This is why you can’t Send a woman to Home Depot! 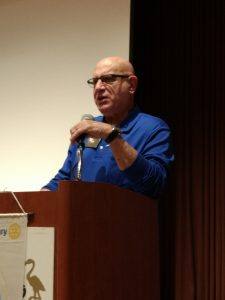 Steve Baime gave a craft talk today about Steve Olson. Steve has a masters degree from UC Davis. He has been an agriculture instructor at Ferndale High and later taught at SRJC. He established the SRJC agriculture department. He was also the director of the study abroad program for 19 years. He and his wife Elaine have two daughters, is active in 4H, Rotary and numerous other endeavors.

Ray Giampaoli noted that ticket sales are picking up and again exhorted us to sell raffle tickets for our fire relief fund.

Loralee Carter has worked in Afghanistan in Native American communities as well as a community care counselor. She talked today about the processes that catalyze resilience of humans when confronted with trauma.

Loralee discussed her time in Afghanistan, travelling around the country in Apache and Blackhawk helicopters. She was involved in a variety of programs to help soldiers and others cope with their experiences through counselling, yoga and other methods. There was no set program, so she set about designing her own wellness program.

Loralee related the similarity of experience with the firestorm that hit our community in October to that of a war zone. She described symptoms that many in this area are experiencing since the fire, both mentally and physically and encouraged those people to connect with other caring loving people.

Dan Balfe has applied for membership in our club (transferring from the Cambria Club) and has been approved by the board.

Our guest speaker on April 18th is interested in knowing how many of our club members have served in the armed forces, what branch and when, particularly Viet Nam vets.  Sometime between now and then, please email Jackie McMillan with this information at jackiemcmillan@yahoo.com.