Our Program For February 5th

2013 Miss Sonoma County Ashley Kimball resides in Rohnert Park and is a 21 year old senior at Sonoma State University majoring in theater arts with a minor in music. Ashley plans on obtaining a teaching credential with an emphasis on music education.

She is also an accomplished violinist and has been studying violin for 16 years. Ashley founded a local children’s non-profit theater company here in Sonoma County.

While at SSU, she has received the Evert B. Person Scholarship and is the Associated Students Productions Public Relations Coordinator. Besides receiving a scholarship for being crowned Miss Sonoma County, in June Ashley received a talent scholarship for her violin playing at the Miss California Scholarship Pageant in Fresno

Ashley plans to play her violin at our meeting.

President Peggy announced that we’d forgo the usual recognitions in order to make sure that there was ample time for today’s Public Safety Awards presentations.

Elizabeth Karbousky started things off by by leading us in the Pledges of Allegiance. The Invocation was presented by Ryan Thomas, representing the Four-Way Test Committee. Ryan shared his personal interpretation of the fourth question: “Is it BENEFICIAL to all concerned?”, explaining his feeling that it basically means operating one’s business in an honest and ethical way as a road to success. He then led us in a short prayer of thanks.

The only visiting Rotarian today was a former member of our club, Dan Erickson from the Healdsburg Sunrise Club. Welcome back, Dan!

We were honored today to be joined by a number of family members and guests who were in attendance to witness the awards given to our 2014 Public Safety Award winners. Our own Marnie Goldschlag introduced us to what must have been half the Public Safety community of Santa Rosa as follows:

On the Police side were:

On the Fire Department side were: 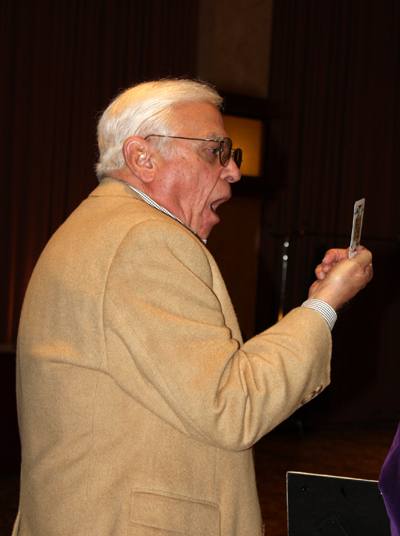 Fred Levin is shocked at the card he drew!

The raffle just grows and grows, but eventually someone HAS to win it, right? Well, it didn’t happen today! With a purse of nearly $1,700 and two jokers out of about 16 cards, Diane Moresi was STILL unable to give away more than $10! This must have killed Fred Levin who had the winning ticket. Better luck next week, Fred. There IS a joker in that deck, isn’t there, Diane?

Past President Marnie Goldschlag introduced us to the people behind the badges and reminded us that each was a human being with feelings, fears and families. 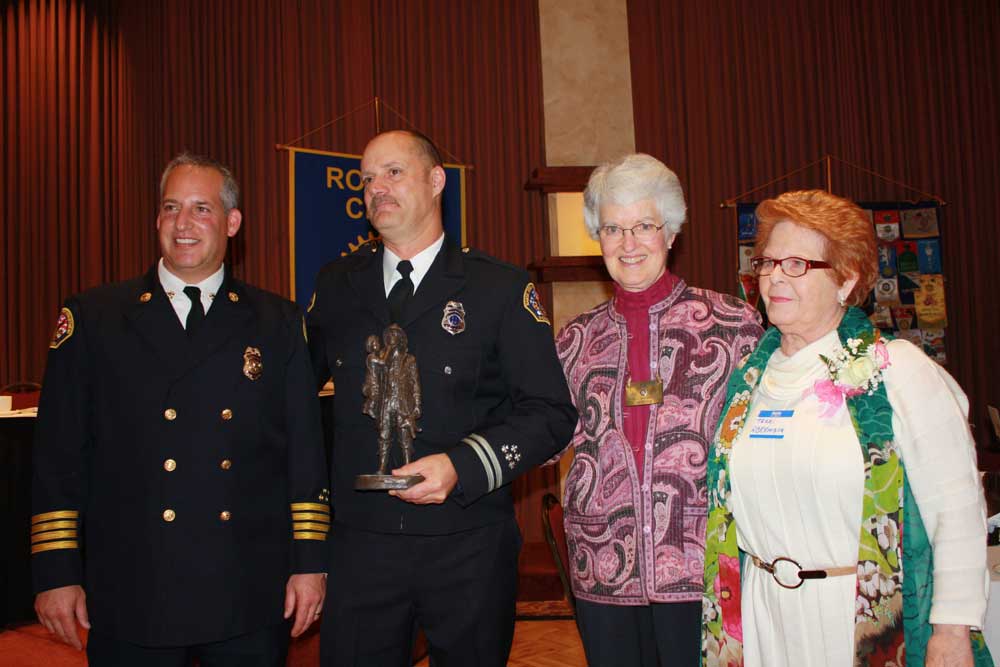 Interim Fire Chief Tony Gossner told us a bit about the Firefighter of the year, Captain Keith Flood. Cpt. Flood has undergone many, many hours of training and has gone above and beyond in service both to his local community and profession. He is a hazmat specialist and has helped develop training media. Because of his expertise, he has been assigned as a wild land fire observer. He recently spent 3 weeks at the Rim Fire, the fourth largest wild land fire ever experienced in California. His duties involved strategizing and directing the firefighters on duty to fight the blaze. Captain Flood is also a member of the FEMA support team, a high honor.

The families of the first responders, it should be noted, are a tight knit community. It was obvious as Marnie worked the room introducing our club members to the police officers and firefighters that a special bond exists that extends to their families who frequently sacrifice holidays so that their loved ones can serve their community. It should be remembered that theirs is a dangerous profession and their families share in the risks of losing a loved one.

At the conclusion of the program, Marnie asked for a moment of silence to acknowledge the passing of BART Police Sgt. Tom Smith who was killed in the line of duty on January 21, 2014.

For the Police: “I haven’t reported my missing credit card to the police because whoever stole it is spending less than my wife.”

For the Fire Fighters: “ Firefighting – One of the few professions left that still makes house calls.”