President Cathy will be presenting a fun
Valentine’s program.
Will it be a heart warming meeting?
Will this be unlike any program
you’ve attended?
Can Cathy decide what she is going to do
for the program?
Come experience love amongst
your fellow Rotarians.

Richard Nisley was the guest of Carolyn Fassi. Tasia Henderson and Amal Ahmed were the guests of Mary Graves

Susan Nowacki was visiting from the Rotary Club of West Santa Rosa.

Tim Fawcett’s mom has passed away. We send our condolences to Tim and his family

We had 7 marbles in the bag with a pot of about $50.00. Julia Parranto had the right number and she pulled the blue marble! Yeah! 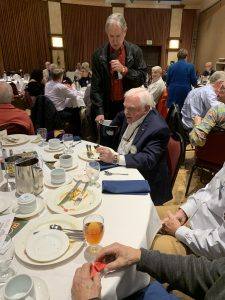 Joke of the week:

Murphy and Jimmy were walking home from the pub.  Murphy says to Jimmy, ‘What a beautiful evening, look at the moon.’

Jimmy stops and looks at Murphy, ‘You are wrong, that’s not the moon, that’s the sun.’ Both started arguing for a while when they come upon a real drunk walking in the other direction, so they stopped him.

‘Sir, could you please help settle our argument?

Tell us what that thing is up in the sky that’s shining. Is it the moon or the sun?’  The drunk looked at the sky and then looked at them, and said,

‘Sorry, I don’t live around here.’

Rotarian of the Month:

Vickie Hardcastle for all the wonderful ways she serves the club and the Foundation for more than 20 years! She manages the huge job of tracking and accounting the Paul Harris points and recipients and has been involved in the Foundation accounting as well for many years.

Please be at the meeting on February 12th. President Cathy has something special that day and she is not telling what it is.

The Rotary Club of Runaway Bay in District 9640 (Australia) has a toast to another Rotary Club around the world on the 1st Tuesday every month. We were so honored! 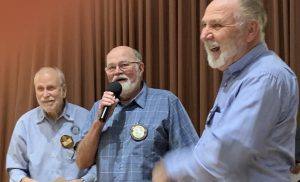 Susan Nowacki from the West Club was here to promote her club’s crab feed on February 22nd at the Friedman Center, 4676 Mayette Avenue, Santa Rosa. Doors open at 5:00 and dinner is served at 6:30. The cost is $100.00, but that includes the open bar. Raffles, Silent and Live Auctions. The theme is Magnum PI so wear your best Hawaiian gear. Kris Anderson has some tickets to sell.

JC Sun pointed out that a Giro Bello Sponsor package was on everyone’s chair. If each of us could find one sponsor it would go a long way to our Giro Bello goal.

Ryan Thomas announced that the Student Recognition Luncheon will be on February 26th. Please be here to support the kids!

Giro Bello yard signs will be available next week.

President Cathy faked being a little under the weather so she asked Fred Levin to step up to the podium and take over……..Fine Madness!!!

Jeff Gospe was fined for being about 15 minutes late every week. Since the stock market is up and bonds are down and he is 52 years old so he donated $100.

Michael Moore had his 75th birthday when he went up to Oregon. He donated $105.

Paul Hamilton ratted out that Kim Murphy has a new horse. Kim donated $100 for her son’s finance’s Paul Harris and another $100 to the club. Paul gave $100 too. Fred took pity on Kris Anderson and only charged $5.00 for her phone that range. Mary Graves got hit for a $5.00 fine too.

Jeff Kolin went to costa Rica on a very posh vacation and paid $100.00. Blaine is going to Pebble Beach for the Golf Tournament and he gave $100.00.

Thank you to out generous Rotarians! Thank you, Fred!

Today’s guest speaker was our own Bill Crowley on “Saving Venice.”

Venice is sinking and Venusians and the Italian government have long come up with ideas but then they never do anything about it. Venice is in the middle of a lagoon off the Adriatic Sea. There are 3 inlets into the lagoon from the sea. The most promising answer to the problem is to put gates at the three inlets and raise them when Venice is having “Acqua Alta.”

Between 1867 and 1964 Venice has flooded 53 times. Besides the high tides, there is the problem with waive action from the boats in the canals. The latest plan to stop the flooding was proposed in 1984. In 1997 a new study was done. The Mose project, talked about for years was finally started in 2003. The finish date was to be 2009. Now it is expected to be completed in 2021-22.

Other issues having to do with preserving the lagoon as a bird sanctuary and the environment of the area is also of grave concern.