A revered tradition of our Club is the annual Lee Abramson Public Safety Awards Program, where we honor members of the Santa Rosa Police Department, the Santa Rosa Fire Department, Sonoma County Sheriff’s Department for outstanding acts of service in our community during the previous year. We welcome the families of the recipients, as well as the Chiefs and Sheriff of the respective departments, who will help present the awards.

Ryan Thomas introduced May Mattos who is thinking of a move to SR.

JC Sun from Fremont has moved to Santa Rosa and is interested in joining our club. Don and Jackie McMillan continue their visit to our club before permanently moving back to Virginia.

Ginny Cannon welcomed President Tony back. Robby Fouts is in the hospital for an undisclosed reason. Tony shared that he is feeling better from the broken ribs he sustained falling off a U-Haul truck while helping his daughter and her family move.

Pete Lescure said there are 7 bad, one good marble and an undisclosed amount if cash is to be won. Julia said, “that would be mine” when the winning ticket was drawn. She did not win the full amount, but she walked away with the $10 consolation prize.

Cathy was absent, so it was a humorless day. ☹

Ted Wilmsen announced that the envelopes should be returned after dictionary delivery for use next year.

Karen Ball announced dues can be paid in increments as needed. She also announced that a service for Bart Eddy’s wife is being held this Saturday, January 19 at 10:00 am.  The location is the Spring Hills Church on Fulton Road in Santa Rosa.

Paul Hamilton asked that anyone interested in joining the foundation board should let him know.

Doug Johnson encouraged everyone to buy squares for the Super  Bowl. They are $10 per square and half the proceeds go to fight polio.

Ann and Jeff Gospe were recognized for their new black lab. She donated $60 each (She and hubby Jeff) to the club.

Rick Allen introduced Margaret Boeger of Pepperwood Preserve. Rick shared that students in the Rotary New Gen program organized a project planting 1,400 plants at the Preserve as part of the recovery from the wildfire, which hit the preserve hard. Margaret noted that most oaks and redwoods will recovery, but many fir, bay and other tree species will not and must be replanted. 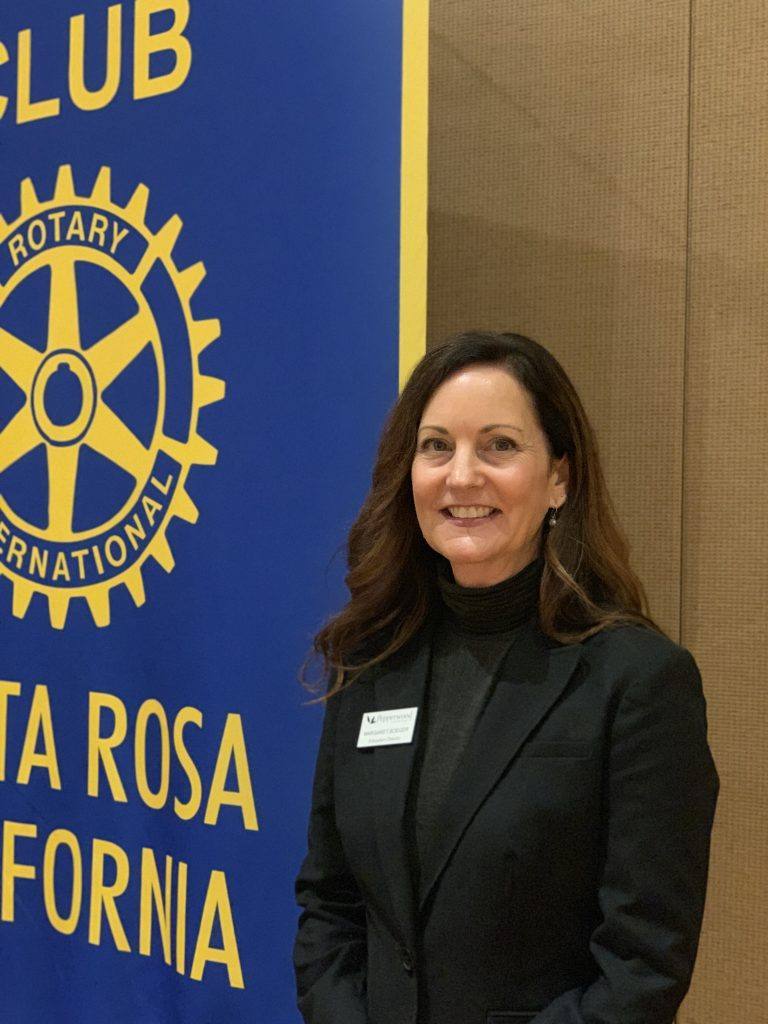 Margaret discussed Pepperwood, which is located near Safari West northeast of Santa Rosa. She shared slides showing the property. The 3,200 acre preserve receives funding from grants and donations. Pepperwood is a “sentinal site” where scientists from all over the world to study how climate is change is affecting the environment. 900 different species of plants and animals are present in the preserve. Among other things, animal movements are analyzed to establish wildlife corridors.

Pepperwood serves grade schools and allows children to spend time in the wild, taking in workshops and learning to identify animals and plants. There is also a teen conservation science program where kids spend a 5 week internship.  Pepperwood also shares education partnerships with SRJC. Research, Education and Community are the goals of Pepperwood.

Interestingly, during the October 2017 fire, 100 head of cattle were found safe after
taking refuge in a pasture where a prescribed burn had previously been done. The fire burned all around them, but they were safe.  Margaret shared photos examples of “fire followers” which are plants and animals that will only appear after a fire has cleared away the thatch layer in the grassland.