Join us January 25th for our club’s annual Lee Abramson Public Safety Awards, where we honor one police officer and one fire officer for an act of extraordinary service during the past year.   We welcome the families of the recipients, as well as the Chiefs of both departments, who present the awards.

Our MC will once again be Past President Marnie Goldschlag, whose humor and close relationship with law enforcement add to the festivities.

Former president Doug Johnson was at the podium today.  Employees of the court house went on strike so Jose had his hands full!  Good luck Mr. President!  So today’s motto is “Real People – Real Impact.”

Carolyn Fassi led us in the reciting of the Pledge of Allegiance.  Elizabeth Karbousky read us some favorite quotations from Martin Luther King in honor of his birthday this week.

Tony Roehrick said Roger Olson from Healdsburg was our only visiting Rotarian today.

Ginny Cannon says that Jack Abercrombie is back at home.

Chip Rawson said that the jackpot today was $65.00 and there were 7 marbles.  Bill Hatcher’s ticket was pulled, but he did not win.

Will Haymaker was asked to review an article in the current magazine.  He told us about the Rotarian Beer Fellowship that has several chapters.  They raise money for clean water around the world.  OK, are you ready to be a winner?  Here is Debi Zaft’s question.  How much money did Stella Artois give to Water.org for clean water projects?  See the article on page 16 and be ready to answer next meeting! 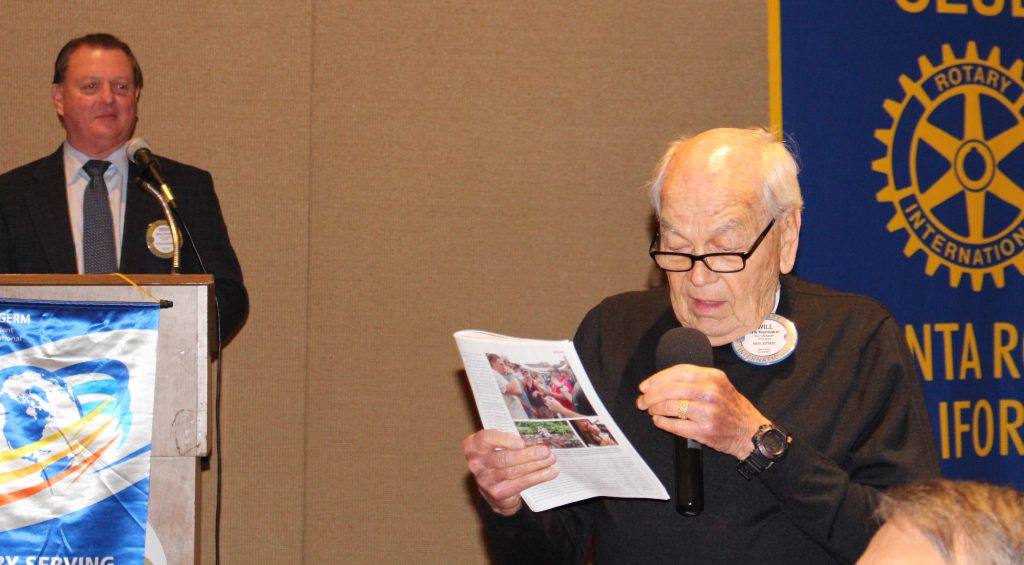 Visitor Catherine from the Sonoma County Commission on Human Rights was here to announce their annual fund raiser.  There are 16 high school students on the commission and they work to raise money for the Redwood Empire Food Bank.

Fly on the Ford
(Click on image to see full size)

There is a special event happening at the Sonoma County Airport February 2- 5th.  An old Ford airplane will be there and you can book a ride on it!  www.flytheford.org

Giro Bello opened for reservations a month earlier this year.  Already we have 79 riders signed up!

Doug Johnson wants the past presidents to reach out to him about favorite projects from their administrations for the upcoming Past Presidents Day.

Ted Wilmsen reminded that dictionaries should all be picked up from him if you do not already have your allotment.

Jackie McMillan announced the City of Santa Rosa will have a hearing on January 24th at 5:00 to discuss permanent financing for the temporary library in Roseland

Doug Johnson is looking for ideas for President Jose’s debunking in June.  (How about the current strike?)  District Awards need to be submitted at the end of March.  See Yale Abrams or Doug Johnson for help with submissions.

Casey D’Angelo says the next class of NewGen students will be starting in February.  Students can apply up to the deadline of February 3rd to be in the next class.

In honor of President Jose, Doug Johnson asked that those being recognized today help fill the Paul Harris Squares….and we did!

Tim Delaney bought some squares (I forgot how many) because he went snowmobiling in Park City, Utah is -27 degree weather.

Robert Pierce bought a square because he also went to Utah…..and shoveled snow

Tony Roehrick bought the 5 squares in honor of his granddaughter who is doing well after her heart surgery.

Marnie Goldschlag bought 4 squares since she just got back from a family vacation to Disneyland and Huntington Beach.  Her daughter is working in human resources for a hospital in Reno.

Doug Garrison, a friend and former colleague of Steve Olson’s wants to join our club.  Any questions or concerns?  Of course not!  Let’s get Doug a red badge!

Keith was a member of our club when Rich de Lambert was president, 1987- 1988.  Rich is still working on bringing him back as a member!

Keith went to work for the North Coast Builder’s Exchange in 2000 after 13 years with the Santa Rosa Chamber of Commerce.  He says he knows little of construction, but they hired him for his marketing and political skills.

2006-2007 was especially hard on the construction industry.  Building was not profitable so all construction just stopped.  That does not mean the demand for more housing went away.  It just made it where the Santa Rosa area is in the top 10 areas of the country where we are really back logged and struggling to find ways to get homes built.  Here is the status of the four areas of construction in Sonoma County:

Residential:  we need more apartments, condos and houses…all types of housing.  The cities and counties are struggling to get building.  There is now building in Rohnert Park, Santa Rosa and Windsor.

Commercial:  There is little building in this area.  No spec building at all.  No new shopping centers, but hotel building is good.

Government and Education:  We have passed a lot of bonds, so there is work at lots of school districts and SRJC.

Remodeling and Repair:  Big business in this category.  People can’t find the house they would like to move up to, so they are remodeling their present home.

Concerns:  Nobody is going into the building trades.  There is going to come a time when the elders of the industry retire.  Who will be available to do the building and remodeling?

Affordable housing is at crisis level in our county.  What will the cities and counties do about it?  Subsidies?  Granny units? Little houses?  Our typical 3 bedroom/2 bath house may be a thing of the past.