NOTE: This meeting will be in the lounge, not the main ballroom

A revered tradition of our Club is the annual the ever popular annual trivia contest. Trivia Pursuit will return on January 30th with a new Master of Ceremonies, Cathy Vicini.  We have two speakers this year teaching us how to use our brains more effectively.  So begin forming your teams and come prepared for a rousingly fun meeting.

Steve Marburger asked visiting Rotarian Chris Parr to pull the lucky number.  Today’s pot was $23.00 plus half of today’s sales.  Cecil Humes had the winning number, but alas he did not pull the blue marble and had to settle for $10.00.

Pete Lescure was passing a clipboard around, looking for volunteers to help with fellowship assignments in February.

Casey D’Angelo announced that the website for Giro Bello opens on TuesdayJanuary 29th to take signups for the June 22nd Giro Bello.  Spread the word!

Ted Wilmsen reminded everyone to get the dictionaries delivered and return the envelopes, extra stickers, letters and dictionaries to him

Cathy Vicini (what! No public safety jokes?) says that next week’s meeting in the trivia contest.  Bring your money.  Bring your brainy friends.  Bring Gay Lebaron.

The meeting will be held in the bar/lounge.  See you there!

Fireman of the Year – Don Ricci 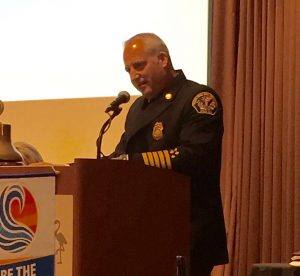 Chief Gossner first made a point that Marnie is turning 50 on January 27th.  Then he told us about Captain Don Ricci.  It should be noted that Captain Don Ricci won this award in 2002.  Don has been with the fire department for 20 years.  He became a captain in 2004.  He was out in the area of Finlaw and Geary Streets when he was aware of a haze that did not seem right.  He drove around using a thermal imaging camera and found the source of the haze.  A home was on fire and a woman was trapped in the house.  It appeared that the only way to get her out of the house was through a very small window.  Captain Ricci took off most of his protective gear and climbed through the window to get her and her dog out safely.  Captain Ricci is a very positive person and will do anything make things better.  He is a flight medic and an artist on the side.

Sheriff Mark Essick introduced Lt. Dave House.  He received this honor for many small and large acts of courage in his 28 years with the department.  He has worked hard to reduce the stigma of mental illness both publicly and privately.  Autism; understanding it and working with the public has been of major importance to him 49% of the people in jail have a mental illness.  He developed the “Be Safe” program.

Captain Ray Navarro was filling in for Hank Schreeder who was happily off to see his son who was coming back from Jalalabad.  This year’s honoree is Officer Andrew Castro. Officer Castro has been on the force for 4 years. The incident that earned him this award happened last July 2018.  He was called to the Vineyard Garden Apartments for an intoxicated person.  It just so happened that his brother was on a ride-along that day.  He found a large woman in the pool flailing and yelling.  She was in the middle of the pool and clearly drowning.  He called in a code 20, stripped off his duty belt and jumped in the pool.  She was not breathing.  His brother helped him get her out of the pool and Officer Castro began chest compressions.  For two minutes he did chest compressions before she started breathing again.  She was visited the next day at the hospital where she was recovering nicely due to his quick thinking, calmness and management of the scene.