SAVING A LIFE THROUGH KIDNEY DONATION

This is your chance to help save a life, it’s easier than you think!  In California, thousands of people are in need of a kidney transplant. Of the people on the wait list only one in five survive long enough to get a transplant. There are many significant advantages to a living kidney donation versus a deceased donor (i.e. The List).  UCSF is one of the leading living transplant hospitals in the country.

UCSF will be talking about the need, the donation process, and how you can help – even if you can’t donate.

This will be a special meeting. Please join us, as we host other clubs who have requested to be part of this event.

Our behind the scenes Rotarian Matt Fannin, making sure we all paid for lunch!

Jack Tolin led us in the Pledge of Allegiance and Robby Fouts read us a few of his favorite Jonathan Swift quotes for the invocation.

Only our old friend Dan Erickson today from Healdsburg

Robby Fouts said there was $90.00 in the pot and only 6 marbles left.  Sam McMillan’s number was pulled, but he did not get the right marble.

President Jose thanked all who participated in the paella dinner at Kathleen Archer’s.

Debi Zaft asked the ladies and gentlemen who wear their badge at the meetings with a chain to please take off any pins.  The pins are breaking the badge boxes.

Ted Wilmsen still has some dictionaries to be picked up.

At next week’s meeting we will have a presentation from UCSF about kidney donations.  As you know, Richard Lazovick is in need of a kidney!

Patricia Shafer gave us an update on the new class of NewGen that will be starting in February.  17 students have signed up and they have room for a few more.  A flyer is attached to this bulletin for you to share.

Matthew Henry got a badge with his name spelled correctly.  Bill Crowley got his blue badge and Doug Garrison got his red badge.  Congratulations to all!

PROGRAM: HONORING JEFF BROWN FROM THE FIRE DEPARTMENT AND DENISE STEBLER FROM THE POLICE DEPARTMENT 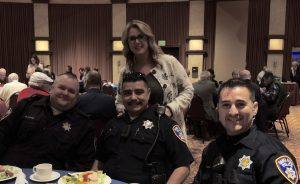 As is procedure, Marnie Goldschlag was once again our emcee and a fabulous emcee she is!  First she played us a video of what cops do when they are bored….they play as firefighters!    Our club started this program in 1994 at the behest of former member Lee Abramson. Lee may be gone, but his wife Terry is faithfully here as always.  Both firefighting and police work are very dangerous occupations.  90 firefighters died in 2015.  135 police officers died in the line of duty in 2016…21 were ambushed!

This is the first year both the firefighter and police officer, selected for these awards, responded to the same call.  It is also the first time the award has gone to a female police officer.

Back in June 2016 Jeff Brown was the engineer on a truck that was called to a house fire on Nebraska Street in Santa Rosa.  The house was totally in flames.  The homeowners had stored ammunition in the garage and it was going off; making it even more dangerous to the firefighters.  Plus the electrical wires were down in the street. Jeff Brown was the Tillerman this day so his job was to break down the door and make sure to get any people in the house out safely.  He was told someone was still in the house.  He did get in, but the person was already deceased.  Because it was truly a very dangerous fire and he went in to attempt the rescue, he was voted by his peers for firefighter of the year.

Jeff Brown was first a paramedic in San Francisco before he came to Santa Rosa in 2002.  He has taken his time to rise in the ranks as an engineer because he enjoys the work so much.

Officer Denise Stebler was first on the scene for the same fire.  She saw the smoke while out patrolling.  When she got to the house it was already engulfed in flames.  A van was burning in the driveway and the ammunition was going off in the garage.  She got around to the back of the house and could see someone inside.  She was able to open the back door and grab the woman as the kitchen window exploded!  The woman survived with singed hair and minor burns.  She would not have survived if Denise had not arrived when she did.  For this reason her fellow police officers nominated and selected her as police woman of the year.

Denise Stebler joined the force in 1997 and was a patrol officer and canine handler.  In 2016 she was fluent enough to become a bilingual officer and has joined the hostage negotiation team.

SOME OF MARNIE’S JOKES:

What did the fireman say when the church caught fire?  “Holly smoke!”

How many firemen does it take to change a light bulb?  Four – three to cut a hole in the roof and one to change the bulb.

Thank you to the Santa Rosa Police Department and Fire Department for your service to our community!

A fire chief died and went to heaven.  When he got there he saw a long line waiting to get in to the Pearly Gates.  He told himself, “I’m a fire chief. I’m not going to wait in line.”  He went to the angels guarding the gates and said, “Let me in!  I’m a fire chief!”  The angels replied, “You’ll have to wait in line like everyone else, sir.”   While waiting at the back of the line he saw a sedan pull up with red lights and a man got out wearing a white helmet that said “CHIEF.”  The angels popped to attention and let the chief enter heaven.  The waiting fire chief was pissed and went to talk to the angels.  He asked, “Why did you let that fire chief go through and not me?” To which the angels replied, “You have it all wrong, sir.  That is God, he just thinks he is a Fire Chief.”

What did the policeman say to his belly button?  You are under a vest!

Why did the cops go to the baseball game?  Because they heard someone was stealing bases!

A man was pulled over by the police about 2:00 am.  The officer asked him where he was going at that time of the night.  The man replied, “I’m on my way to a lecture about alcohol abuse and the effects on the human body, as well as smoking and staying out late.”  The officer then asked, “Really?  Who’s giving that lecture at this time of the night?”  The man replied, “That would be my wife.”