Home is more than a house – it sits at the center of our lives providing comfort, security, and warmth. The Firestorm on October 9, 2017 took all that away from 5300 of our friends and neighbors.  In a continuing effort to aid in our county’s recovery process, our program on July 18th will showcase Homebound, formed in November, 2017 by Tom O’Brien, Cardinal Newman Class of 1998.

If you or someone you know is still struggling with the unrelenting maze of rebuilding, we welcome you to attend this informative meeting on July 18.

Ginny Canon reported that Jack Abercrombie is suffering from a blood clot. Please keep him in your thoughts.

Rich de Lambert ran today’s raffle, with $168 and 2 marbles in the pot. Unfortunately, Roy Thylin picked the right ticket, but not the right marble and walked away with the $10 consolation prize.

Two immigrants from Africa arrive in the United States and are discussing the differences between their country and the U.S. One of them mentions he’s heard that people in the U.S. eat dogs and if they are going to fit in, they better eat dogs as well. So they head to the nearest hot dog stand and order two “dogs’’. The first guy unwraps his, looks at it, and nervously looks at his friend.

“Which part did you get?”

Jackie McMillan asked that anyone attending our Rotary meeting August 1st with speaker Erin Brockovich sign up so we can get a good head count. Jackie reports that 51 club members have not indicated whether they are coming to that meeting. Please email Jackie at: jackiemcmillan@yahoo.com by July 18th with either a YES, a YES with # of guests or a NO, not able to attend.

Student Audrey Brown is selling tickets to a dinner Aug. 3rd to raise money for her exchange student trip to Denmark.

President Tony honored Julia for her work this past Rotary year with its fire related challenges. Julia welcomed Tony to the President’s chair and pinned him with a hug.

Jackie says only 3 cabins are still available  for the 2019 Rhine River Cruise.

So far, 13 club members have signed up. Two picnic tables have been reserved. Tickets are still available at the $63.00 level. Contact Jackie if you are interested in joining the fun!

Tony asked us to look around the room and appreciate who we are and how honored he is to serve as our president. Recognitions for vacations (along with a gift) will be reinstituted this year. The past year had a shortfall of some $10,000 and it is projected that if we do things the same way this year, we’ll have a $9,000 deficit. The board has determined that an increase in dues to $175 semi-annually, the first increase in 5 years is needed to make up the deficit. It has been decided that reinstituting recognitions and fines will also help make that up. Tony recognized his own trip to Toronto by donating $100 to the foundation. He then auctioned a t- shirt he acquired from the International Hockey Hall of Fame. Tony then recognized others who attended the Toronto convention:

Sam McMillan brought back a gift of Canadian beer and moose droppings. Sam also donated $100 to his Paul Harris.

Steve Olson was also recognized for his attendance at the Rotary Convention and donated the $100.

Doug Johnson announced he is in charge of organizing our District participation, attendance and yes, the District reception for the Hamburg Convention. next year. They fill up fast, so if you’re interested in going, act soon.

Peggy Sobranis was recognized for a river cruise she took with her sisters.

Tony recognized Cecil Humes for his many years of service to our club.

Tony spent the rest of the meeting reviewing the various facets of our club services. Locally, the focus for this year and probably future years will be continued fire relief, using matching grants. Potential projects include rebuilding Coffey Park, providing 10 lending libraries for new homes of fire survivors neighborhoods. Rebuilding Coffey Park is another opportunity as well as homeless relief. Renewal of the New Gen Peacebuilder program is planned for this fall. Membership sustainability through retention and new members will be emphasized.

Internationally, areas of focus are peace and conflict resolution, disease prevention, water and sanitation among others. “Be the inspiration” is the Rotary theme for 2018/19. New District Governor Barb Spangler’s  district theme is “Do What Matters”. 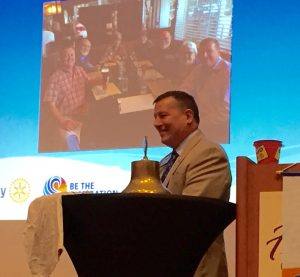