Our Program for July 8th:

President Armiñana will talk on the topic of “Higher Education in California”.

Ruben Armiñana became the sixth president of Sonoma State in 1992. Previously he served as Vice President for Finance and Development at California State Polytechnic University, Pomona, 1988-1992 and prior to that he served at Tulane University as Vice President/Assistant to the President. In addition, Dr. Armiñana held faculty appointments at both institutions, in Political Science at Pomona and in International Business and Political Science at Tulane.

During his tenure at SSU, he has furthered the academic, instructional and co-curricular programs of the university making SSU one of the most popular campuses in the California State University. Under his leadership, the university has entered into numerous partnerships with donors, businesses and public institutions in the North Bay region.

Dr. Armiñana serves on the boards of North Bay Leadership Council and the Corporation for Education Network Initiatives in California, and is an Associate Member Regional Representative for the Hispanic Association of Colleges and Universities and has served several terms as a State Representative for the American Association of State Colleges and Universities. He also serves on the Santa Rosa Chamber’s Business Education Leadership Committee.

Stephan Passalacqua introduced President Doug Johnson and Doug took to the podium and welcomed us to his first meeting as president. An interpreter was not available, but we seemed to understand what he was saying. Maybe we are finally learning Bostonian? Fred Levin led us all in the Pledge of Allegiance. Robert Pierce told us about the fate of the signers of the Declaration of Independence (it was not pretty!).

NEW! JOKE OF THE WEEK

If you are a friend of Cathy Vicini on Facebook, and you should, she posts two jokes every day. President Doug has asked Cathy to pick a favorite each week and tell it to the group.

Eileen Carlisle reported that Peggy Soberanis’ husband had a medical issue, but he is on the mend 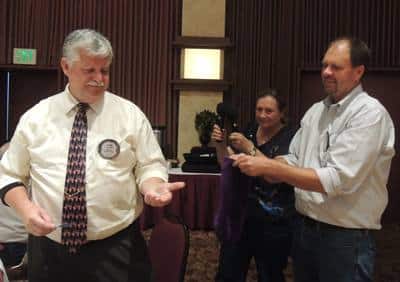 Steve Marburger was our raffle coordinator for the day. There was $179 in the pot. Doug Robert’s number was called, but he did not pull the right marble. The pot rolls over to next week.

Yale Abrams said that 55 members from our club worked on one Hands On Project or another this past year. All names went into a drawing and Jim Johnson was the winner! He gets a $100 gift certificate. Nice!

Wayne Rowlands announced that the next Rotary Means Business meeting will be at his house next week, Thursday, July 9th, 5:30 to 7:30. He will be serving up his famous baby back ribs.

President Doug had some preliminary information to give us on the Giro Bello. They had 898 riders and estimate that the profit will be around $60,000. It will be awhile before they have the final numbers in. On a very positive note, 73 of our 110 members helped with some portion of the Giro Bello. That is fantastic! Three members of our club were recognized for their selfless work when asked to do a little extra: Rich de Lambert did parking and SAG. Dave Brown went out and helped at rest stops when the unexpected need came up. Bob Higgs made himself, and his truck, available to pick up and haul stuff around.

Richard is from New Jersey. He was the middle child. His dad was an engineer and set a good example so Richard likewise went into engineering. Heck, he was fixing his neighbors appliances by the age of 10! He got his BS from Cornell and a MBA for UC Berkeley. He has worked for National Semiconductor and Zilog Semiconductor. He is an inventor! He also has been/is a stay at home dad to his son Joshua (who was visiting us today). Like some people we know, he has to have the latest gadgets. These days he runs his business iTech Tutor from his home. He can work on just about anything that is electronic: TVs, Stereos, computers, you name it! He has a passion for helping people and is said to be incredibly patient. This is the first time he has told us about his health issue; he has lost both kidneys in the last couple of years and must due 7 hours of dialysis every night. He is on a wait list to receive a kidney. He would rather get one from a live donor, a “living kidney,” as it should last twice as long as one received from a recently deceased person. The average wait for a kidney is 8 years. To be tested to see if you could be a donor (not just for Richard) you can go to www.ucdonor.org . Richard’s name and birthday is there (4/13/1962) so you know you have the right person. If you are not a match to him, they can see if you are a match for someone else.

President Doug and his Vison for the Next Year

President Doug started the program by showing a video he saw in Buenos Aries about a woman, Razia Jan, who has started a school for girls in Afghanistan and would like to build a university for girls there too. Her website is www.buildaschooltoday.com. President Doug was so impressed by this woman that he told her our club would donate $1000. To be sure of it, he went on line and personally donated $1000. Razia came to the United States a long time ago. When she wanted to go back to Afghanistan her family told her not to come….it was not safe.   When she finally was allowed to come back she built a school for girls. 500 attend and they have a 96% retention rate. When she does get enough money to build the university there will only be three degree offerings nursing, engineering and teaching. “Boys are the back of Afghanistan, but the girls are the eyes.”

This year’s international theme is “Be a Gift to the World.” Doug’s local theme is “Real People, Real Impact.” His goals are:

Ted Wilmsen announced that this is his 40th year in Rotary. He donated $400 to three of our scholarship funds: John Brown, Wes Jamison, and Larry Bello.

Steve Olson was just back from Scandinavia to visit the area where his wife’s family came from in Finland. Also went to St Petersburg.

Carmen Sinigiani is just back from a two week trip to Italy.

Editor’s Note: While cleaning out our club’s storage locker, Former President Mark found a cornucopia of historical information about our club from the mid 1920’s. Summer 1925 was a quiet time, so we are including information from both June and July 1925.)

(These are excerpts from Board minutes and summaries of Press Democrat articles that featured the Rotary Club of Santa Rosa, from June and July 1925, 90 years ago.)

Louis Sales, classification Refined Oil Product, discussed “Standard Oil Service. A.R. Corrick spoke on the stationery business and how it had made provisions for improvement in all kinds of business methods and providing blanks to assist business men in maintaing proper check on their business. (Editor’s note: Sounds like an early Rotary Means Business meeting!)

L.V.Somes, who was approved in the Optometry classification, turned down membership in the club. No reason was included in the minutes.

Proposed member in Transportation was objected to by A.R. Corrick due to his attitude towards the Boy Scouts and the Chamber of Commerce. His name was withdrawn from consideration.

Member Jack Plover had resigned from the club due to financial pressures. The club really wanted him back, so they arranged for the club to employ Mr. Plover, paying “an annual salary equivalent to the dues.” In a while, you will see Jack’s name again.