Our Program for July 29th:

CUBA – THEN AND NOW

Susan & Neil Silverman will speak on “Cuba: Then and Now”.

REMINDER: The August 5th meeting will be held at St. Rose

The Pledge was led by Kris Anderson

The Invocation was as a thought provoking message by Chip Rawson. It center around the idea of having lower expectations in life therefore you will be less disappointed in the long run. He ended it with a quote from C.L. Lewis. He offered a spot to whoever could guess who it was and Past Prez Kathleen Archer was the winner…did you pay up Chip?

Joke time….resident humorist Cathy Vicini shared a story about a preacher and a farmer…Thanks for the laughs Cathy!

Matt Fannin introduced the quartet of Rotarians which included Bill Fisher “the water guy” from the West Club, Ann Mcginley from the East Club and Assistant District Governor, Jay Jacobson all the way from Salt Lake City Utah, who also exchange a flag with us.

Sam McMillian shared that the club will be buying 2 hogs and 2 lambs this week at the fair and if anyone that is interested in buying one for themself give him a holler. Fellow Rotarians extraordinaire Steve Olson will be honored by the 4H on August 29 at Richards Grove. If interested in going see Sam. Also, FFA will be having a dinner on August 21 that Rotary will have a table at that one as well.

Elizabeth Karbousky shared that there will be another wine social at the Burchill’s home – day and time to be announced. From the feedback from the club, looks like it will be Monday evening. Cheers!

Paul Hamilton announced that there are sponsorships available for a cool $500 for the annual Veterans Day luncheon coming up this November. See him or a member of the committee if interested.

Nick Knickerbocker did not win the raffle

Fred Levin along with President Doug’s help attempted to explain the new game that is supposed to resemble “bingo”…resident raffle chief Nick Knickerbocker had the lucky ticket did not win but came away with the consolation ten-spot. Guess we’ll see how this new game plays out as the weeks go on??

President Doug took some time to share the different bucket of money that Rotary collects from you in order for us to make a difference in our community and the world. One of the buckets includes the “club funds” that help support the club and are captured thought dues and some recognitions. Another is the local foundation which supports our local charities and scholarships. The last bucket is the International Foundation or “Paul Harris” Funds which is used for matching grants for Rotary International programs. Doug shared that last year we did not fare well in our giving in the district in this final category and to help boost our numbers he announce that we will increasing this number with a game of pick your squares and take a chance on winning an instant Paul Harris. Each square, 1 to 100 will cost you $10 and by filling it up that adds up to $1000. Because the club has credits, we will be a able to count this as new money and you will get credit and in turn one lucky Rotarian will win an “Instant Paul Harris” plus 17 other prizes including wine, jam and fair tickets. Great Job Doug!! The squares were nearly sold out after the meeting and a winner may be 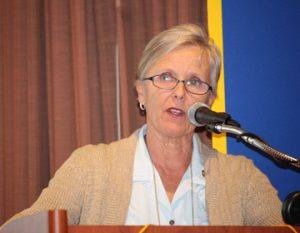 Past President Kathleen Archer took the stage to share a little bit about an international program that she is involved with that involves Micro loans to people in Columbia. This unique program helps those who do not have the resources or the means to secure a loan for their small business or idea. Our Club’s $4,000 donation will grow 9x from donations by other District sources & Rotary International funds.

This is another way that Rotary is making a difference.

Mark Burchill was quoted in a recent article in the PD and pledged $25 for the club and committed to $30 to the Paul Harris square game. Nicole Le and family were celebrities in the new Fountain Grove magazine and coughed up $50 bucks to the club for the honor.

Assistant District Governor Ann McGinley introduced our speaker Dr. David Fedson. Dr Fedson is a graduate of Yale University and has a very impressive background. His life work has centered on the study and treatment and prevention of communicable disease. He shared with us the current outbreak of the Ebola Virus and that to date 11,000 people have died and that there is no end in sight. The use of “Top Down” interventions utilizing vaccines to target the virus are very expensive and in very short supply and bottom line are not very effective. Dr Fedson argues that the use of a “Bottom Up” approach to treating the host Response of patients is safer, less expensive and now available in West Africa. He showed the difference in the 2 treatments and explained why one might be favored over another. For those interested there was a long Q and A after the meeting.

Wow, what a response you all gave to the new “Instant Paul Harris” concept!

I stood in awe as member after member lined up with cash in their hand and filled in the squares on the board. In just 15 minutes the $1,000 was raised!

I cannot begin to tell you how proud I am to be the President of our club this year.

Every one of you deserves a big, “Thank You”, for showing your true love and support of Rotary and the almost accomplished goal of worldwide polio eradication. I do want to extend a special, “Thanks”, to Cathy Vicini (wine), Lena Humber (port jam), and Sam McMillan (Fair tickets) for the generous prizes they supplied. Based on this success I plan on another raffle next month. We already have 24 squares pre-sold! If anyone has any items they would like to donate as raffle prizes, please contact me. Simple, fun, not too expensive items work well.

President Doug closed the meeting thanking those who helped make it possible.
OFFICERS