Our Program For July 30th

This week’s meeting is the Talent Show!  The meeting time has been changed to 6:00 PM.  Come see what talented Rotarians we have in our group!  It is OK to bring wine and pay an $8 corkage fee or go to the bar for a cocktail to bring into the meeting.

President Mark Burchill opened the meeting.  Gesine Franchetti led us in the Pledge of Allegiance and Jackie McMillan read us a couple of her favorite quotes:

There were none.  Guess they heard it was club assembly day or they did not want to hear us brag about the Giro Bello and the Pillow Fights!

Wayne Rowlands brought Gabe Tuft (aka Tyler Rex) who is helping us with the Pillow Fights.  He will be participating in a celebrity bout.

Penny Tibbetts says all is well.  If you are following Genie Delles on Facebook you can see she is doing well with her cancer battle.  Such a positive spirit!

Today’s raffle winner was Eunice Valentine and she got $37!  President Mark says he is going to change the raffle in August to mix it up a bit.

Next week’s meeting is the Talent Show!  The meeting time has been changed to 6:00 PM.  Come see what talented Rotarians we have in our group!  It is OK to bring wine and pay an $8 corkage fee or go to the bar for a cocktail to bring into the meeting.

There will be a joint social of all 4 Santa Rosa Rotary Clubs on Tuesday, August 12th at the St. Rose School.  There is a $10 charge.  For details, download the Joint Social Flyer here: Joint DG social flier

Queen Jeanne Levin will be manning the Rotary Information booth at the Sonoma County Fair.  If you have any Rotary magazines at your home or office, please give them to her.  She will use them at the fair. She would also like some helpers.  Please give her a call!

Queen Jeanne also noted that she is able to make a contribution to the Rotary Foundation when she buys things on Amazon through their program Amazon Smiles.  Check it out for yourself!

President Mark went over the Santa Rosa Rotary Club’s budget.  He also discussed when and where we can find information on the board meetings.  The board is trying to be more transparent.  Good job Board of Directors!  The board agenda will be posted approximately 1 week before the board meeting.  The summary of the meeting will be available on the website approximately 10 days later.  Please remember that the board meetings are open to all Rotarians to attend. Download the budget here: Club Budgeting

Doug also had a few awards to give out to his amazing team:  Chip Rawson got the Eager Beaver award for being out at O’Reilly and Associates one week early.  He got a calendar with next year’s date circled.  Jackie McMillan, as treasurer, got an abacus. Ray Giampaoli was named Rookie of the Year and got a baseball autographed by Doug Johnson.  Robert Pierce was named the Invisible Person award for his artwork and photography.  Needless to say, his trophy was invisible!  Gesine Franchetti and Elizabeth Karbousky were in charge of the food at the event.  They got Giro Bello aprons for their effort.  Doug had a special gift for Carmen Sinigiani for all her hard work for the last 4 years.  She has been such an inspiration to him (and us all).  Since she aspires to run the Boston Marathon, Doug presented her with a Boston Marathon singlet.  Doug said that working with Carmen was so easy.  They might have a disagreement about something but because of their great respect for one another it worked out well.

75 club members helped in one capacity or another this year.  To achieve our future goals we need the help of all Rotarians in our club.  Next year’s event in tentatively Saturday June 27th, so put it on your calendars now. 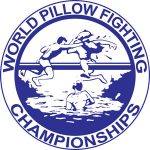 Now that the Giro Bello is over, it is time to focus on the Pillow Fights that will be on Saturday September 27th at Sonoma Mountain Village.  Wayne Rowlands gave us a brief history of the world famous pillow fights put on by the Kenwood Fire Fighters since 1964.  They became so famous that in the last year they were held in Kenwood, over 10,000 people came!  It was just too much for the tiny town of Kenwood so they had no choice but to shut it down.

The Kenwood Fire Fighters contacted the Santa Rosa Evening Rotary Club to see if they wanted to partner up.  The Evening club felt they were too small and suggested talking to our club.  It has been discussed by the board for quite some time.  It became public early this year, but the board felt we had to get through the Giro Bello before we got the club involved.  Now is that time!  There are two things you can do right now to support this project:
[list style=”arrow” color=”blue” el_position=”first last”]

At the August 6th club meeting, our speaker will be Richard Gulson, a polio survivor and voice of the Pillow Fights.

This first year we are limiting the crowd to 5000 people.  There will be at least one celebrity bout between Tyler Rex and Brian Cage.  They have approached the sororities and fraternities at Sonoma State University for the Battle of the Greeks. There will be a kid’s play area sponsored by Tiger Kick that will have a jumpy house, climbing wall and an obstacle course.

There will be 3 bands playing during the day; Heros Turn Human, Pacific Haze and the Shannon Rider Band.  Lagunitas Beer, Mary’s Pizza Shack and Sally Tomatoes have signed on to provide food.  Facebook, Twitter and the website are actively marketing the event.  Tickets are available and can be bought on Eventbrite.  Sonoma Media Group will be our radio advertising partner.

Important!  At our meeting on August 27th we will have an ABC Training class for serving alcohol.  If you or any of your family or friends will be helping with the alcohol at this event, they  do need to take the training.  Invite them to the August meeting!

At last we come to the end of our meeting.

Karen Ball is recruiting for the social committee. She has some fun ideas for this next year, but could use your help.

Ginny Cannon has a wardrobe committee.  We all need more, and different Rotary labeled clothing and her committee will make the decisions!

Elizabeth Karbousky is looking for another one or more people to help with the birthday committee.  She may be missing in action starting in January because SHE IS PREGNANT!  Congratulations Elizabeth!

Tim Delaney is recruiting new members for world community service.  Wouldn’t you like a voice in where we spend our international dollars?

The meeting was then adjourned so that we could all check out the committees and volunteer.  Remember we all have to pitch in to make our club successful.  If you were not able to attend this meeting, please contact the people mentioned in this week’s bulletin to sign up.