Our Program for August 3rd: 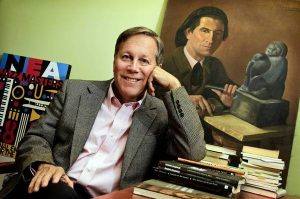 Come meet the man who left the corporate world as Vice President of Marketing for General Foods and who was on the team that invented Jell-O Jigglers, to become an internationally acclaimed and award-winning poet and former Chairman of the National Endowment for the Arts. Dana Gioia (pronounced JOY-uh) will be our speaker on August 3rd. 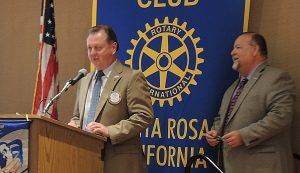 Past President Doug and President Jose. Doug is giving the Invocation

The Pledge of Allegiance was led by Vicky Hardcastle

The Invocation was presented by Doug Johnson

Christine Schieberl from the Santa Rosa West club was in attendance today. 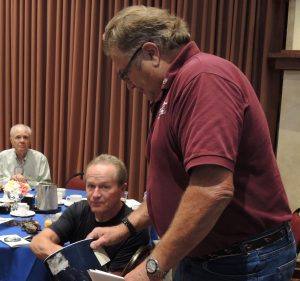 Robby Fouts again presented today’s raffle. This writer didn’t catch who won the drawing for the money, but Layne Bowen won two fair tickets after having his number called.

Ginny Cannon announced that Cathy Vicini is recovering from her recent surgery but is not quite ready to attend Rotary. 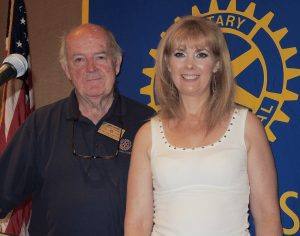 Rotarian Jack Geary presented a Blue Badge to his daughter Andrea Geary. Two generations of Rotarians in the same club!

El Presidente Jose awarded a blue badge to Andrea Geary and acknowledged her immediate contributions to our club including her running the Bocce Tournament and participation on other  committees and events.   He then auctioned off two tickets to this Sunday’s Giants/ Nationals game at AT&T Park that were provided by Diane Moresi. PP Bill Rousseau won after a heated auction for $125. 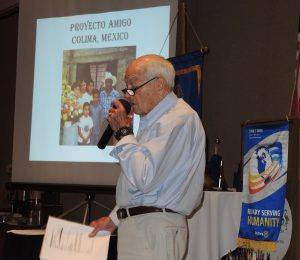 Rotarian Will Haymaker highlighting Project Amigo. One of our very important committees!

El Presidente, Jose will be asking each committee to give a presentation to discuss what they are doing on the committee level.  Today, with his usual “Aloha!” greeting, past president and aspiring hula dancer Will Haymaker shared information about the legacy project supported by our World Community Service Committee, Project Amigo. Project Amigo has long been supported by our club. The project is based in Colima, Mexico and is an education program for children who would otherwise have extremely limited access to education. Project Amigo has supported children from kindergarten through college and beyond including one young woman who is now studying to be a surgeon.  Club members are encouraged to, as Will said, “Get off your butts and go down and work for a week”. 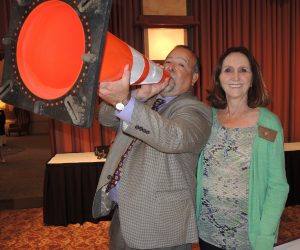 El Presidente,Jose took a few minutes to acknowledge a few Rotarians. Dr. Shari Shamsavari was recognized for giving Giro Bello shirts to the children’s Mariachi Orchestra in Guadalajara. Diane Moresi was recognized for her skill at locking her car keys inside her car the day of Giro Bello in an age where it’s almost impossible to do so. For this, Diane was awarded an East LA car key (a coat hanger) by El Presidente Jose. PE Julia Parranto was recognized for her lavish Hawaiian vacation for which she donated $100 to daughter Andrea’s Paul Harris. Don McMillan was awarded a traffic cone in absentia for his work running Giro Bello. 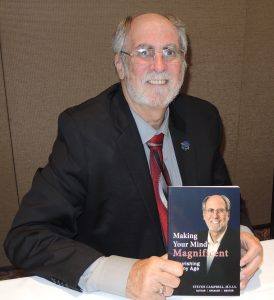 Professor, Author and Professional guest speaker, Steven Campbell gave an enlightening and engaging program on the mind and how it works.  Professor Campbell, whose book “Making Your Mind Magnificent” revealed how our mind receives and “believes” the thing we tell it. For example, if we tell our mind, “I can’t do that”, the mind believes it. If, however, you tell your mind ,”I can do that”, it believes that as well. This explains how we sometimes convince ourselves we cannot do something, like write a coherent bulletin ……

EL PRESIDENTE QUESTION OF THE WEEK

From which country does El Presidente Jose hail?

The first few raffle number drawings were for Sonoma County Fair passes. This is Rotarian Layne Bowen and Rotarian Jack Atkin fooling around. Layne had the winning number 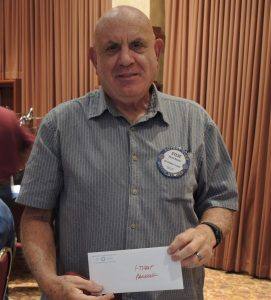 Steve Baime with his winning passes 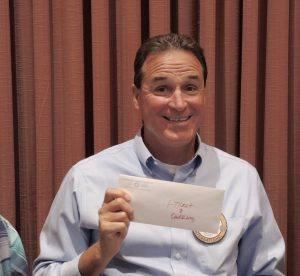 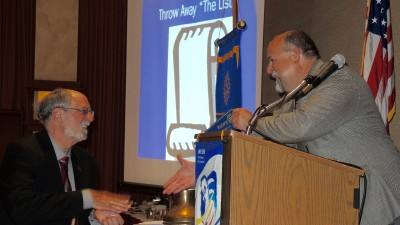