Our Program For July 16th

Solar PV is a proven technology, first discovered in the 1830’s and used to power satellites in 1950s. Panel prices have fallen significantly in the past few years leading to greater adoption. What is really changing this industry is policy and financing that make the switch to renewable clean energy easy and financially attractive. Come hear about two new programs that can benefit Sonoma County’s Ag industry and Non-Profits.

President Mark opened the meeting and claimed this would be a more ‘regular’ meeting. But I had another plan up my sleeve!

He invited the venerable Fred Levin to lead the Club in the Pledge. He did so without hesitation. Up next was the highly intelligent Elizabeth Karbousky to offer this week’s invocation.

We had a visitor from very far away, Frederick Ocayabese, a civil engineer from Gulu, Uganda!

The raffle had a paltry $51 on the line. But there is nothing happier than to see such a fine Rotarian win the prize! Congrats to the lovely Lena Humber!

What was the new Rotary International President’s favorite sport when he was younger? 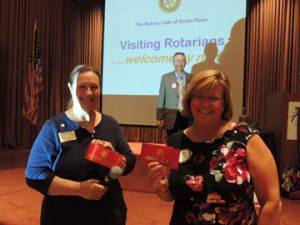 El Presidente Mark announced the appointment of two new Sergeant at Arms Assistants. Cathy Vicini and Anne Gospe will be “Mic Jockeys” and otherwise helping out the legendary Jack Geary in his capacity of Sgt. at Arms. Sort of a funny old title, no? What the heck does it mean? I looked it up. It owes its origin to the Middle Ages in England. Today, it is mostly used in “deliberative bodies’ such as houses of parliament or congress.

Here is a quote on the duty of the Sergeant at Arms – “The formal role of a Sergeant-at-Arms in modern legislative bodies is to keep order during meetings, and, if necessary, forcibly remove any members who are overly rowdy or disruptive.”

Ironic, no? One of the ringleaders at the infamous “Rowdy Table” is now charged with ejecting overly rowdy members.

Kris Anderson let our Club know that in her capacity at All State Mortgage (not to be confused with Allstate Insurance) she could provide loans and refinancing for all sorts of residential and commercial mortgages. Give her a try if you need some cash!

Interested in the results from our most recent Club Survey? Email Club President Burchill for more info at President1415@https://www.santarosarotary.com .

There were a ton of birthdays announced by Mrs. Karbousky today. Of those in attendance, Blaine Goodwin, Casey D’Angelo, Ray Dorfman, Hon. Knoel Owen, Paul Hamilton and a Red Badger Peter Holewinski! Members celebrating their birthdays somewhere else today were: Kevin Brown, Kim Murphy (probably on a golf course somewhere 😉 and Dr. Barry Silberg (probably coming up with a major medical breakthrough somewhere.)

Steve Marburger was inducted into our Club today! A former President and Member of the Santa Fe Rotary, we gave Steve a memorable intro to the Club.

To try and bring up the level of import and fun with this occasion, we roasted him just a tad on a fictional incident where we made up a story that he had drank “a wee bit too much Scotch and turns out, Steve was in the hotel pool splashing around with the incoming exchange student from France!”

That was not true! But he did get a glowing report from his former Club and we welcome his input, service and fellowship here in Santa Rosa!

ROTARIAN OF THE MONTH – Peggy Sobranis!

Her final months as Club President were trying, to say the least, as the Club struggled with issues that threatened to become serious. She pulled the plane out of the dive and helped foster better Goodwill. For that, and all she did as president, she was rewarded as Rotarian of the Month!

Buzzy started off his lively program with his guitar in hand leading the assemblage of Rotarians in singing the Motown hit My Girl. Imagine a room full of business people singing, “I got sunshine on a cloudy day…….” A great way to get the crowd’s attention.

Buzzy, real name Danny Van Portfleet, hails from the near Motor City, Grand Rapids, MI to be exact. He taught himself guitar and just assumed he’d be a rock star from the beginning. Currently, he describes himself as a Musician, Youth Advocate and Author.

Buzzy described in some detail his sometimes scary experiences working with juveniles and hardcore San Quinten inmates. His description of working in San Quinten where being shot or worse was a very real threat each time he visited. He described how youths he counsels seem excited about the opportunity to go to prison and earn their stripes, while the reality of prison is anything but glamorous. His descriptions of the treatment of inmates was chilling. For more information, check out Buzzy’s interesting website.

Writer, producer, arranger, and performer for 2000 Kids Helping Kids, a song to help raise funds for the construction of a new facility for Sonoma County’s Valley of the Moon Children’s Home.

Writer, producer, arranger and performer for 1993 song featured on national television programs, and radio play; Please Come Home to help create awareness surrounding the kidnapping of Polly Klaas and for all missing and abducted children.