Our Program for June 8th:

TERESA TUDURY started writing songs at age 12 and was performing in San Francisco nightclubs by the time she was 15. With a deep, sultry voice that magnetizes audiences, and a scathing comedic wit to match, Teresa is a consummate performer who pours out her original songs with power, verve, passion, and disarming humor. Throughout her career, Teresa has recorded or performed with such greats as Leonard Cohen, Rickie Lee Jones, Lyle Lovett, Taj Mahal, Leo Kottke, Charlie Musselwhite and Bonnie Bramlett. 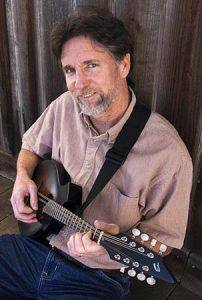 MICHAEL CAPELLA’S songs and musical style began to evolve with his mother’s love of music. Michael spent many evenings singing around beach and camp fires in northern California camp grounds such as MacKerricher Beach in Fort Bragg and Folsom Lake.

He has performed his songs in Northern California as a solo artist, in the duo Capella & Jones, with Late Harvest and most recently Under the Radar (dobro & acoustic guitar).  His most recent projects are the Roadhouse Ramblers (pedal steel & guitar), and a Linda Ronstat tribute band in Santa Cruz area.  He has been co-writing and performing with Jaclyn Steele, a talented Atlanta based artist, since 2012. Michael Capella’s newest project is the MCB (Michael Capella Band)  which performs all original material.

President Doug Johnson laced up his high tops and took the court as a team of two, with his 7-year old granddaughter Camille. President Doug made a ‘no look’ pass to Camille, and she took control of the agenda by introducing each of the following parts (below).  Camille was cool under pressure and made the meeting a slam dunk for Doug.

Kathy Schwartz led the Pledge of Allegiance and Past President Will Haymaker provided the Invocation – a sports story about an Irishman on a deserted tropical island (see Will for details).

As reported by Peter Holewinski, there were no visiting Rotarians in attendance today.

Ginny Cannon gave a sunny report and Ray Giampaoli is on the rebound after excessive hand-checking by some surgical doctors. At least it wasn’t a ‘dead ball’ foul!

Robby Fouts managed to protect the $59 raffle pot by providing a good defense and avoid a blind-side steal by Kerrie Chambers’ guest, Gina Jacquez, who was the ticket winner. Gina fouled out of the game with $10.

Kathy Schwartz and her Craft Talk

New member, Kathy Schwartz, schooled us on her background. She moved here about a year ago after being a long-term resident of San Diego. She has two children, loves to garden and has been active in multiple careers in all sectors – government, non-profit and private. She is currently in private practice as a career counselor and is involved in the field of education.

Kathy drained her craft talk as well as Steph Curry or Klay Thompson can drain a 3-pointer from downtown. And, she beat the buzzer, too. Welcome Kathy!

Elizabeth Karbousky  advises us to take a time-out and attend the next club social event, held on June 9 at 5:30PM at Gesine and John Franchetti’s restaurant on North Dutton Avenue.

Karen Ball declares that the June 29 Debunking club meeting will not be a lunch meeting, but will be a dinner meeting at 5:00PM at the Wikiup Club at 500 Wikiup Drive.  Dinner will be catered at the same price ($24). If you miss it, it will be a flagrant foul of the highest order.

Past President Don McMillan is doing a full court press to get rid of all the green Giro Bello volunteer t-shirts. He guarantees he will not have your size. See him at the next meeting and he’ll hand one off to you.

The Club Roster will be going to press soon. Please send any edits to The Club Secretary now.
New photos also need to be submitted now. Both can be sent to Jack Abercrombie at jackabercrombie@sbcglobal.net.

Bill Hatcher and Debi Zaft are recognized by Kim Graves

Kim Graves is back at it with more pins to recognize multiple Paul Harris fellowships by Past President Debi Zaft and Bill Hatcher. Kim says this years’ RI Foundation fundraising goal for our club was $12,000 and we have raised $13,000 so far.  We have the rest of this month to cheer for the home team, so get off your backcourt and support the RI Foundation to send President Doug for his (well-deserved) rest on the bench!

Not one to run time off the clock, President Doug called the following fouls on (un)suspecting Rotarians:

John Poremba was called for a traveling foul for enjoying his retirement while on a 42-day cruise to 14 countries from Singapore to Barcelona, Spain.  When John set the cruise control knob, he didn’t figure it would cost him an extra $100 donation to the John Brown Veterans Memorial Scholarship Fund (of our local Foundation) – but it did!

Past President Steve Olson couldn’t dribble his way out of a $100 donation to the Wes Jamison Agricultural Memorial Scholarship Fund (of our local Foundation) since he violated the 8-second rule by a wide margin – 22 days on vacation with a 13-day ‘bucket list’ Rhine river cruise (to only 6 countries).

Jock McNeill, owner of now 4 companies with new offices in St. Helena and Santa Rosa, claims to be working hard, managing 1,000 residential rental  and 100 commercial rental units.  He did not garner sympathy from the crowd, so he self-assessed a $250 fine by starting a Paul Harris Fellowship for his daughter Ella.  Do the math: 1,000 + 100 = $250?

Jack Atkin fumbled a behind-the-back pass to avoid a foul, but his 17-day trip to Hawaii was just too long to be ignored.  And, he met up there with two former club Rotarians – Ray and Debra Dorfman.  Jack laid it up for $100 to his son Matt’s Paul Harris Fellowship.

Past President Rich de Lambert set a screen for Past President Bill Rousseau but Bill ran into it and the play ended with an illegal substitution.  Bill admitted to clipping  at least a few roses off the rose bushes on county property near his office for use on our Rotary float in the recent Santa Rosa Rose Parade.  A thorny matter that lead to Bill’s $50 gift to the John Brown Fund.

The Junior Giants program was the subject introduced by former SF Giants pitcher Noah Lowry (2003-2007) and by Skip Wallace, program coordinator for the City of Santa Rosa Recreation and Parks department.  Both gentlemen were introduced by Past President Yale Abrams.

Skip and Noah teamed up to tell us about the Junior Giants program run throughout the SF Bay area.  In Sonoma County, it is a free noncompetitive program for boys and girls about baseball that has attracted 220 youth (ages 5-18) from mostly low-income households.  The kids learn about confidence, good health, teamwork, integrity, leadership as well as baseball.   The emphasis is on character development.

The program consists of about 15 teams with both team and individual activities that take place over the course of eight weeks from June to August.  Games are played at Elsie Allen High School.

Participants also learn to improve their reading skills and understand how to handle bullying by their peer group.  Many incentives are given throughout the course to reward the completion of each weeks’ work.  At the end of the program, kids from all teams in the Bay area converge on AT& T stadium and have an on-field event to close out their ‘season.’

The Junior Giants program locally is in need of volunteer coaches and assistant coaches (no baseball experience required – free training if needed) and team parents to all work together for their teams.  The league starts June 13 and sign-ups for volunteers can be done at any time.  Go to jrgiants.com to learn more.

President Doug adjourned the meeting in regulation with a wine raffle conducted by Camille, courtesy of guest Matthew Henry and Yale Abrams.

Doug thanked all of our club volunteers for the day and then he launched one from half court.  And, he MADE it!!  Only 3 more  ‘games’ before Doug’s retirement and the dawn of the Jose Jump Shot.

GO WARRIORS – ALL THE WAY!