Our Program For June 26th:

The Debunking of President William

It is not official what year the very first Rotary President was “debunked” but we can only imagine when & why someone adapted an American tradition that dates back to 1828 to honor our departing presidents. Debunking was named after some unpleasant disagreement that occurred in Buncombe County, North Carolina. It means to expose or excoriate a claim or assertion as being pretentious, false or exaggerated and its purpose was to discredit opposing points of view. A Google search fails to locate the connection between this tradition and Rotary presidents. If you spotted the asterisks* around the “93” in the sub-heading above, when our Rotary Club won’t turn 92 until this December, please be assured that in our Rotary Year of 1931-32. The Rotary Club of Santa Rosa did have two presidents: James Edwards & Davis P. Anderson.

After a rousing, heartfelt Pledge of Allegiance to our Flag led by a faint voice way back in the crowd, Nona Lucas stepped to the podium, observed that the summer solstice would be this Friday, June 21st, and shared the words of Barbara J. Winter as today’s invocation:

When you come to the edge of all the light that you know
and are about to step off into the darkness of the unknown,
faith is knowing one of two things will happen:
There will be something solid to stand on,
Or you will know how to fly.

This week’s sole Visiting Rotarian  traveled all the way from the Rotary Club of Rockford, Michigan, to honor the Past Presidents of the first and oldest Rotary Club in Sonoma County: A hearty welcome to manufacturer Bill Knape.

The huge crowd of Rotarians welcomed back the guest of Past President (1987-88) Rich de Lambert, Brandon Ulrich. Carmen Sinigiani’s guest Jason Black, from Edward Jones and Jack Abercrombie’s guest, Carolyn Ivancovich. Past President (2010-11) Don McMillan introduced his guest, Eunice Valentine, who will be with Pacific Foundations, Inc. as the Santa Rosa Coordinator, and Past President (2004-05) Yale Abrams introduced his spouse Terry, of Abrams Consulting.

Immediate Past President Marnie gave notice that President William would not be eligible to join the old has-beens at the center table until he survived his final Trial-by-Fire (better known as Debunking) next Wednesday. Because of earlier program schedule conflicts, Marnie assumed control of the final two meetings of this Rotary Year and made her third mistake as the newest past president: She ordered the Sergeant-at-Arms to give a live microphone to our honored guests. As expected, chaos reigned as 18 old timers grappled for first place in Outrageous Story Telling.

Past Presidents in attendance:

Always a leader, Past President Yale asks, “Where is all the free wine?”

At last! “Just Joel” has been waiting 30 years to speak to these guys 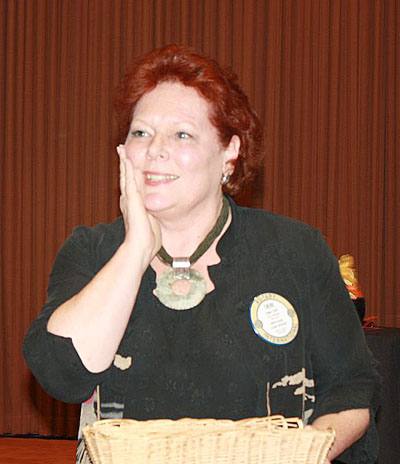 A deserving Debi Zaft (the only member who has read each issue of The Rotarian from cover to cover!)

Past President (2006-07) Debi Zaft asked an unidentified Rotary Past President to draw the name of the recipient of this year’s $100 prize. In case you couldn’t hear the winner over the fellowship mumbling of 18 past presidents, you will be surprised to hear that the name drawn was that of an overwhelmed Debi Zaft.

Nick Knickerbocker announced that the Raffle Jackpot had grown to $198 but he did not announce today’s odds. Red Badge Rotarian Jane Duggan’s lucky ticket was drawn but she suffered the universal fate of would-be Raffle Winners (except for Ted Wilmsen). Jane was consoled in the knowledge that $10 in cash would get her a refreshingly-tasty bottle of Sonoma County wine.

Today’s agenda was too crowded, but the unspoken announcement by Club Secretary Jack Abercrombie reminded us that the deadline for changes to your roster listings is only one week away. Contact Jack immediately to correct your hard copy roster for 2013-14. His current listings are already accurate.

With Doug Johnson attending the Rotary International Conference in Lisbon, Portugal Past President Don McMillan urged all Rotarians that we have two urgent needs for the Giro Bello cycling event that actually begins the evening before the Beautiful Rides on Saturday, July 6th: With only 16 days left we need more volunteers and more registered riders! Such a great opportunity for all of us to join Rotary’s fellowship and be part of our Rotary Club’s biggest fundraiser of the year that will enable the hundreds of  projects, grants, and other educational projects outlined last week by President Bill in his Rotary Year in Review that was re-printed in The Santa Rosarian of June 12th. Pitch in and help as much as you can. It’s fun and enjoyable with the three beautify rides beginning and ending at the beautiful outdoor park of O’Reilly Media only a few miles north of Sebastopol, 1005 Gravenstein Highway North. Contact Don McMillan by email or telephone. See how, and where, you can help the most. Don is listed in the current Club Roster and online at www.santarosarotaryclub.com

Sound Engineer Needed:  The Sergeant at Arms Committee is seeking Rotary volunteer to take charge of passing the portable microphone to members during the meeting. Contact Jack Geary at jtgear12@sonic.net.

John McHugh reminded our Rotary Club of the brand-new, never-been-done-before “Legacy Project” that he had talked to us about at the June 5th meeting. Two weeks ago he asked for our help from members of our club and outlined project standards, and how to use them to evaluate a Legacy Project. The standards were covered in The Santa Rosarian two weeks ago in the June 5th bulletin. You will hear more about it after next week’s debunking. In the meantime just imagine what you would suggest as the Rotary Club’s best Legacy Project for the coming year.

Michael Truesdell dropped by to settle up with Rotary and his obligations to Rotary business before he left for his new position. Mike made it obvious that he was going to miss Santa Rosa and his Rotary friends after almost nine years at Cardinal Newman. In parting he contributed $100 to the Club and promised all of us that he plans to move back to Santa Rosa permanently when he retires in a few years.

President William noticed that there was a lull in the program and called for Wally Lowry to defend his cap with the built-in hair. Wally attempted a defense but finally donated $25 to the club.

Wayne Rowlands confessed that his blood pressure was already above 180 a full week before he was to climb the south tower of the Golden Gate Bridge to get big-city publicity for Rotary Means Business. His first down payment for ultra-high blood pressure was only $15.

Past President Don McMillan must have played golf with President Bill and let slip that Don bought a new car, a Honda CRV of undetermined color. McMillan insisted that replacing his old vehicle was a necessity due to all of the parking lot dings.

Larry Milano has been confessing and paying bargain prices for being recognized lately. This week he blurted out that his oldest son was getting married next week and donated $50 to the club. 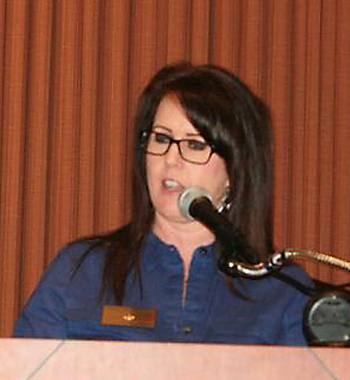 SECRETS OF PRESIDENTS PAST

Past President Marnie continued to bask in the limelight, conducting a nefarious quiz show designed to reveal hidden secrets of past presidents of our Rotary Club, U.S. presidents, and first ladies. Unfortunately for Marnie, the first secret revealed was Marnie’s date of birth from which all else was measured. Here are some samples:

How many U.S. presidents have died while in office? The surprising answer? Only eight presidents did not survive their term of office.

When Kathleen Archer was an 8 year old schoolgirl, she excelled at what skill or talent? And why did she retire at age 18? No one could guess that she was a concert violinist but was forced to retire after 10 years because an injured finger prevented her from vibrating the strings properly when she played her violin.

So Kathleen gave up music and became a nationally-ranked athlete in college. What was her sport and at what school did she play? The answer was that she played intercollegiate volleyball at Cal, which defeated the more powerful U.C. Davis when it was top-ranked.

In the mid-nineties, Norm Owen was up to his ears in major Rotary projects. One of the projects that required an act of Congress cost our club more than $10,000 over a few months. What was that costly project? Why was Norm’s year as president so expensive and memorable? The answers are complex: With almost double the current membership, the Rotary Club of Santa Rosa would complete the new Rotary playground for children in Howarth Park by our 75th anniversary. Norm was also chair of California’s Committee on Barrier Awareness and our Rotary Club took the lead in our state’s first Barrier Awareness campaign.

Ellie Lowry tells us that husband Wally Lowry has a tendency to collect things. Not yet a “hoarder”, but Ellie revealed that he has a large collection of these dark objects. What are they? Ancient ink wells!! Wally collects antique ink wells.

What female past president has a scar on her chin because she fell into a fireplace while dancing to Barry Manilow’s Mardi Gras performance of “Copacabana”? Of course everyone knows the answer: It was little “Twinkle Toes” Marnie G.

What Rotary past president is famous as the professional musician who had the honor of playing a concert at the Washington Cathedral, yet also backed up the great Rock & Roll group—The 4 Tops—at the same venue? The answer was Don McMillan!

What dedicated Rotarian played saxophone long before he was Rotary President? It was Steve Olson!

And the one question that completely stumped Rotarians Wednesday afternoon? In spite of dozens of wild guesses no one was able to guess what Rich deLambert was doing on a number of Navy ships during World War II? The answer was that the young child entertainer we know so well spent the war years entertaining U. S troops, tap-dancing for soldiers, sailors, admirals and generals.

Thanks to Past President Marnie for organizing this year’s Past President’s Day, and to all of the past presidents who attended and participated in this enjoyable celebration. See you all next Wednesday week at the Debunking of President William Rousseau.