Thea Hensel, a founding member of the Southeast Greenway Campaign and Co-Chair of the organization for the past 9 years, will be our speaker on March 8th.  She will bring us up to date on the progress being made through community input and Planning Commission meetings.

Few projects have been in discussion longer than this one.  Approximately 1,400 households live within ¼ mile, and 5,000 households are within 1 mile of the Greenway. Many destinations including schools, shopping centers, medical facilities, and places of worship are within walkable/bikable distance from the Greenway.  Invite your friends to come and learn what the future may bring for this significant undeveloped parcel in the heart of Santa Rosa.

Thea is a 2011 Fellow of the Leadership Institute for Ecology and the Economy, was a Board member of the Sonoma County Forum, works on the grant committee for Impact-100 and has resided in a cohousing community for the past 11 years.

Before retiring, Thea had a long career in sales with the Wrangler Jeans Company, taught school for five years, and was an employment recruiter in the biotech industry. She has a BS from State University of New York, Oneonta, a Masters in Education from NYU and an HR certificate from SRJC.  She enjoys traveling with her adult daughter who teaches in the Bay Area, hiking, music, swimming and sharing all things food, wine and the arts with friends.

Thea comments, “It brings me great joy to work with dedicated people in this shared vision of a Greenway for Santa Rosa.”

Reminder; Our March 22nd meeting will be at St. Rose Church.

Keven Brown ran the raffle today. There was over $100 Yankee Dollars in the pot of gold, but Ted Wilmsen was unable to draw the lucky marble. 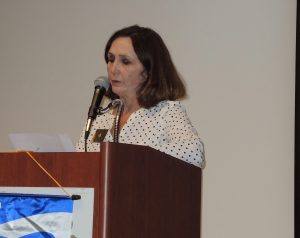 In celebration of this veteran Rotary member Jackie McMillan shared sort of a “living eulogy” for Rich de Lambert. A 3rd generation Californian, Rich has led a rich and varied life. He was born and raised in Oakland and is a graduate of San Jose State. As a young man, Rich was an athlete – swimming and tennis were his specialties. He competed in national clay court tennis events and US Open tournaments and coached tennis at Cardinal Newman for 5 years.  Rich served two years as an active serviceman in the Army as well as four years as a reserve. While in the service, Rich was a quartermaster tennis player, was a catcher and manager of a baseball team, was a payroll guard and worked in the color guard.

A classic “overachiever” has worked with almost every mover and shaker in our area during his successful career in banking and lending.  Over the years at Empire Title Co., Rich worked with Hugh Codding, Frances Carrington and Andy Shepard. At SR Savings and Loan, Rich worked with Ralph Stone, Bob Kerr, Jim Keegan and Henry Trione.  He also started Sonoma County S&L with Traverso and Italian Bank.

Rich was also a teacher at SRJC, holding a credential in economics, business law and math. He has taught evening classes in these subjects. Since retirement from his other pursuits, Rich has worked at four different wineries.

Rich has been a fine community leader. He was the chair for the United Way of Sonoma Valley. In 1971 he joined Rotary and was the president in 1988. In 1985 he organized the County Visitors Bureau and in 1986 was the president of the Chamber of Commerce.

Doug Johnson showed a couple of short videos describing the ideas, goals and accomplishments of Rotary, with an emphasis on leadership.

Doug recognized Rich who described his accomplishments which included bringing in the first two female club members and raised over $100,000 for polio.
A Place to Play was an effort put forth by Will Haymaker during his presidential year. Steve Marburger was the president of a Rotary Club in Santa Fe in 1999. His club grew from 20 to over 50 people during his year. Mark Burchill’s goal and accomplishment was to make meeting more fun. Les Crawford tried to mix things up and efforted to work collaboratively to increase the financial health of the club. Remember the Mac McAnally and Jonatha Brooke concert collaboration with Sonic Temple? Don McMillan’s 2010/11 year was to come up with a new fundraiser, which resulted in Carmen’s Giro Bello idea. Wally Lowry’s year saw financing of a film about people with disabilities. Membership grew from 140 to 240 members during Wally’s year, to which he credited Rich de Lambert. Norm Owen oversaw the building of the Rotary gate at the entrance to the children’s play area at Howarth Park, which was built by the Rotary Club. Norm went on to become a dynamic district 5130 governor.

All presidents are to be recognized for their leadership and accomplishments with the Rotary Club of Santa Rosa.

EL PRESIDENT JOSE O’GUILLEN WOULD LIKE TO THANK THE FOLLOWING ROTARIANS FOR THEIR HELP IN MAKING TODAY’S MEETING A SUCCESS: