In honor of Opening Day 2019, author Ken White will discuss his book, Getaway Day, a coming-of-age novel set against the backdrop of the 1962 World Series which pitted the San Francisco Giants against the New York Yankees.

Getaway Day and Ken’s first novelette, Sarah’s Game, are both part of the library at the National Baseball Hall of Fame.

Here is a longer description of the book:

Mikey Wright is a normal 13-year-old. With normal problems. Until the day he finds out his dad has cancer. Getaway Day chronicles Mikey’s journey to save his father’s life and learn the meaning of his own. His journey to help his father takes him from the safety and security of his home town to Anaheim, Chicago, and back down Route 66. Along the way, he’s helped by some ordinary and extraordinary folks. Each one has something to teach Mikey about fathers and sons, growing up, family, and home.

His efforts are thwarted at every turn, until Mother Nature steps up to the plate. When a freak storm deluges the Bay Area and forces postponement of the 1962 World Series and makes it impossible to practice in nearby San Francisco, the New York Yankees and San Francisco Giants make arrangements to work out in nearby Modesto. Mikey is inches from making his father’s dream come true when an encounter with his high school arch-nemesis threatens to ruin all of his work. Join Mikey as he learns selflessness and the power of believing. He discovers that expectations aren’t real, loneliness is absolute, change is inevitable, and laughter is essential. Ultimately, he learns that growing up means letting go.

$115 in the pot. Vicki Hardcastle presiding. Nour Maxwell’s ticket was drawn, but she didn’t pull the right marble.

The husband, typically non-romantic, replied: “I am on the toilet. Please advise.

Ray G. asked for everyone to get out there and find sponsors for Giro Bello.

President Tony shared a thank you letter to our club by a third grade parent.

Tony presented Bob Sorenson with a giant card signed by our club members wishing him good luck on his move to the East Bay to be closer to family – WE THOUGHT! Bob shared that plans have changed and he said, somewhat sheepishly that he will be staying around for the foreseeable future. OK, with us, Bob! We love having you here!

Laura Held shared a craft talk reintroducing Fred Levin. Fred was a football player, graduating high school in 1957. Fred served in the air force, then attended American University. After college Fred was in marketing and sales for Northrup Grumman. He met Jeanne while she was a student at George Washington University.

Fred and Jeanne moved to the west coast where Fred went to work for several different companies and Jeanne pursued her law degree. Fred retired at age 61, after a career working for several large Bay Area companies. Fred also was president of our Santa Rosa Rotary Club in 2009-10.

Amy Miller, the artistic director then gave her perspective and discussed how Transcendence Theater began. The first theater was established in Mexico, but then they went on a nationwide search for the best place to establish their organization in the states. This brought them to Sonoma and they have, so far raised $450,000 for Jack London State Park. Remarkably, 900 people showed up for their first performance in 2011.

Education director, Niko Krimzin exuberantly shared how he works with children in theater. He also shared details of his career as a stage actor and now as a director. He oversees a kid’s camp where children learn and perform songs to be performed at an end of session concert. He also shared a summer theater apprentice program and other programs that Transcendence provides for youth. Niko is especially proud of outreach programs to people of color, particularly the Latino Community. Transcendence works locally with kids from Hanna Boys Center, Sonoma Community Center and La Luz Center in Sonoma. Finally, he described the mobile unit that goes out and shares the arts in 3 and 4 hour programs with underserved youth.

We were left with a stirring version of The Impossible Dream, sung by Stephan and accompanied by the group’s pianist, Katie Coleman. 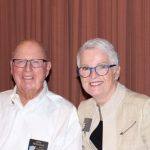