Our Program For March 12th

The Rotary Club of Santa Rosa is co-sponsoring an exciting new Rotary microcredit project in Ecuador. Through this project, small loans will be provided to very poor people to help them establish their own small businesses. This will be a Rotary Foundation Global Grant project, and is being organized in conjunction with other Rotary clubs in District 5130 and the District 5150 Microcredit Committee.

Our speakers will be Keith Axtell, Chair of the District 5150 Microcredit Committee, and Past District Governor Holly Axtell. They will highlight their District visit to Bogota, Colombia reviewing their District’s recent microcredit project serving 200 displaced people in Colombia. The new project in Ecuador will also be explained, with photos of recent loan recipients.

The target for the new project is to provide 320 loans to promising needy people in the Esmeraldas Province of Ecuador. The project will also provide a Rotary training center where clients will receive business skills and vocational training. Loans and training will be starting soon, as the application for this project is now in review by The Rotary Foundation.

President Peggy opened the meeting of the finest club in District 5130 with her usual graceful and calm style. She invited Rich de Lambert to lead the Club in the Pledge and then Ray Foreaker came up to lead the club in prayer.

The raffle had over $120 on the line. It was suspect from the start as there seemed to be tickets in the bucket that had no owner.  Then, Ryan Thomas pulled a Joker and almost bought a new pair of shoes for his daughter before Tim DeLaney said “It ain’t the Joker no more! It’s the Queen of Diamonds!”

Poor Ryan.  He almost had it! And now has only $10! Tim should give Ryan another $10 just for giving  and then taking away…..

What is the message to all Rotarians from RI President Ron Burton from the March 2014 issue of The Rotarian? 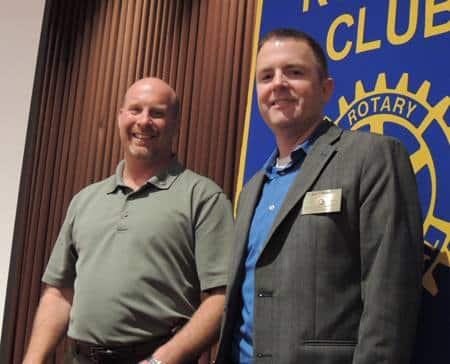 Ray Giampaoli – has completed all the 101 requirements of Red Badgers and now receives his Blue Badge.  Congratulations, Ray!

The SRPD corporate members have had to resign. What a shame! We had four quality members there but work pressures prevented them from meeting our requirements.

Rich de Lambert promoted the new Evening Club’s fund raiser that will be May 24 at the Vets bldg from 6p.m. to 11 p.m.  It will be like a cook-off only it will be a cocktail war.  Who can mix the best cocktail?  Appetizers are available, and a BBQ will be outside.  It’s the club’s first big fund raiser, so put it on your calendar.

Bill Rousseau passed the hat for the Sonoma County High School Scholar Athletes Awards and $268 was raised! Thanks to all who donated!

Mark Burchill mentioned the District Assembly upcoming in Ukiah on April 5th. All Rotarians are welcome and encouraged to attend.

Lastly, Carolyn Ivanovich stepped up like a big-time Rotarian in hosting our foreign exchange student! Way to be Carolyn!

Alba Diaz was joined by her parents Jose and Rosa to be honored with a plaque and a $100 check. Here to introduce Alba was her Roseland University Prep High School principal Michelle Leisen. What a bright star is Alba and what amazing things are happening over there at RUPHS!

Suroj Marajan of the Rotaract group from SSU is the International chair of their club.  He presented a very well made video called No Mo Po for no more polio.

For a little background, October 24th was World Polio Day and the SSU Rotaract students, in conjunction with  organizations all over the world,  displayed a large ” End Polio Now” Illumination on the outside Wall of Darwin Hall on campus. There  were similar displays all over the world on that same day : Sydney Opera house, Paris Eiffel Tower, Darwin Hall at SSU, etc.  SSU Rotaract received a community service award from the City of Rohnert Park for their World Polio day illumination.

The video was fantastic. Somewhat disturbing was an interview of a young mother of three from Sebastopol who had decided that there was no good reason for immunizing her children against this dreaded disease.  Her opinion is similar to many in this area. Many young parents are beginning to believe that immunizations are either dangerous or simply a way for pharmaceutical companies to make money. Sonoma County, specifically West County, has the HIGHEST rate of non-immunized children in California. Sadly, people who think this way can be likened to those in certain parts of the 3rd world who believe that immunization against polio is simply a western plot to sterilize their children. Unfortunately, young parents who have never had firsthand experience with polio do not understand that the disease is only a “plane ride away”.  They also do not seem to understand that the “herd” needs to be immunized to protect everyone, not just from polio but many other childhood diseases that those of us who grew up in the 40’s, 50’s and 60’s know only too well. Those diseases include: chicken pox, mumps, measles and several others. Hopefully, this brilliant SSU Rotaract film will be shown all over Sonoma County to educate those who have chosen not to immunize their children.

This honor goes to a relatively new member who had an idea and wasn’t afraid to try it out.  He took an idea, developed it and ran with it.  He persevered when we were slow to respond and he made it work. He has been patient with us and he’s stayed even when he saw our flaws. The Board wanted to recognize and honor his initiative, his creativity, and his perseverance. Please help me recognize and congratulate Darren Elliott as our Rotarian of the Month.

Today’s speaker was Steve Freitas, a 29 year veteran of law enforcement.  He was elected Sheriff in Jan 2011 and came to speak in front of our club today about his office as not just sheriff but coroner.

Steve spoke of the cost being imposed on our county by the state for redistricted prisoners, people with mental health issues and more.  His office is being proactive with youngsters to try and avoid the $133 daily cost to taxpayers of having that kid end up in jail!  $48,000 per year, times 475 prisoners means $23 million annually!  Wow!

He took many respectful and thoughtful questions from the Club and also stuck around after to talk to members.  Thanks for your time today, Sheriff!