Our Program for April 6th:

The Parsons family grows grapes and tomatoes in Fulton, Calif., a farm they established in 1994. Today, Kelley and Tom Parsons at Parsons Homegrown grow some of the finest tomatoes in California, by using a greenhouse the couple purchased from Agra Tech, one of the world’s leading manufacturers of greenhouses designed for vegetable growing and all other types of greenhouse farming. The switch to an Agra Tech greenhouse has helped Parsons to produce amazing tomatoes time after time.

Currently Parsons Homegrown grows three varieties of tomatoes–Favorita, a cherry tomato; Geronimo, a red beefsteak, and Yellow Boy, a yellow beefsteak. They can be found at Shelton’s Market and Big John’s Market in Healdsburg, Molsberry’s Market in Santa Rosa, Speers Market in Forestville and all three Oliver’s Markets. John Ash & Co. and Rosso Pizzeria and the Duck Club in Bodega Bay also buy Parsons tomatoes. You can always find Kelley Parsons at her stall at the Santa Rosa Original Certified Farmers Market.

Kelley will tell us about the genesis of this thriving farm which started randomly and unexpectedly in the early 1990s. Her passion and knowledge of all things tomatoes will be evident to all of us!

Chip Rawson does the invocation

Not so sunny per Ginny Cannon:  Jack Abercrombie is having surgery to remove fluid from his lungs as a result of the pneumonia he had at the end of last year.  He is at Queen of the Valley Hospital in Napa.  Bob Sorenson just had back surgery and is just getting home today.  Kim Murphy’s mother-in-law has died so she is off to Indiana.  Will Haymaker just had shoulder replacement surgery.

Jose Guillen has the ticket

Jose Guillen had the right number, but he did not have the right marble.  $10 is all he gets.

JOKE OF THE DAY

Cathy Vicini entertained us with a joke about a barking dog that was in someone else’s yard.  The husband complained so the wife went out to see what she could do about it.  She comes back and it was still barking.  “What did you do?” asked the husband. “Well,” she said. “I moved it into our back yard.  Let’s see what they think when a neighbor’s dog is barking.”  It was funnier when Cathy told it. 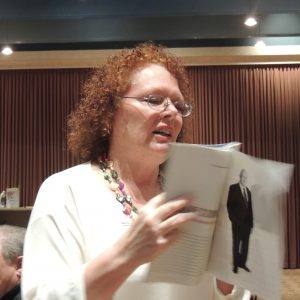 Debi Zaft and the question

Well we had a poor showing of people for the question of the month.  Just goes to show how few of us are reading the magazine!  New month is the month we are to have 100% readership so start reading now!  The question was about a picture…who is the person in the picture?  It is the president elect for Rotary International.

Simone Leibowitz and Catherine Liang were there from Interact to promote their Night of 1000 dinners on April 16th.  See the Interact Night of 1000 Dinners flier for details.

Emily Harrington announced that the Giro Bello has over $28,000 in pledges!  That means we are a little over the halfway point on the goal of $50,000.  Each Rotarian who donates $500 or gets a donation of $500 goes into a raffle for some pretty special prizes!

Larry Miyano announced that anyone who knows a student that would like to apply to our Rotary Youth Exchange program that there will be an informational program on April 20th for those who may be interested.

Jose Guillen announced District Assembly is on April 9th in Ukiah.  Please sign up and you will be reimbursed after your attendance.  We are carpooling.

President Doug announced District Conference May 6, 7, and 8 in Napa.  Here is a link to a great informational video: 2016 Rotary District 5130 DisCon.

DON’T FORGET THAT NEXT WEEK ROBERT PIERCE WILL BE TAKING EVERYONE’S PHOTO SO THAT WE HAVE THE BEST LOOKING ROSTER IN THE WORLD and for $50 you can purchase the photo for your own personal use.  Half of that money will go to the club.

Bill Rousseau went to Hawaii for 17 days!  I am so jealous!

Tim Delaney was off to Joshua Tree, the Living Desert and San Luis Obispo.  I think he promised money to every one of our charities and foundation!

Today was the day we got to meet some of our “Charitable Grant Recipients.”  The attached list is the four organizations, what they do and home much they received from us.

Representing The Living Room was Cheryl Parkinson.  Our own Nick Knickerbocker and his wife Camille were founders of The Living Room.  April 28th is the move in day for their new location.  We have contributed money for their new playground.
[divider_line type=”divider_blank” el_position=”first last”]

Cheryl Stanley was here from the Women’s Recovery Services. Our club did a hands-on project for them a few years back.  I believe we have regularly helped them as they help women with addictions and their children.
[divider_line type=”divider_blank” el_position=”first last”]

Dennis Hanson was here from F.I.S.H. to thank us for our contribution.  It is the oldest and largest all volunteer free food pantry in Sonoma County.  In their 40+ years they have served over 1.4 million people!  3/4s of their food is donated.  The rest is purchased.  Our contribution will purchase up to 840 lbs. of chicken, 150 cases of beans and 150 dozen eggs. Please see the F.I.S.H. flier here.
[divider_line type=”divider_blank” el_position=”first last”]

The YWCA’s sensory garden was our last recipient and their representative could not be here today as her husband surprised her with a vacation.  This sensory garden may be one of our future hands on projects.

PHOTOS OF OUR GUESTS 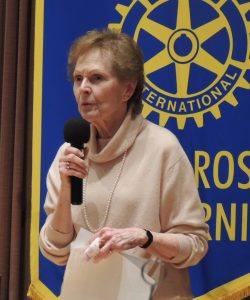