It is time once again for the Rotary Club of Santa Rosa to honor our Past Presidents.  Come join your fellow Rotarians for conversations and words of wisdom from those who have helped guide our club, and other clubs, over the past years.  This is a special day, honoring some very special people.  We hope you’ll join us.

Our Past President Doug Johnson will be the Master of Ceremonies.

Ray Giampaoli    led us in the reciting of the Pledge of Allegiance and Carmen Sinigiani read a bit of history on International Women’s Day from Wikipedia.  President Jose pointed out that this is also the 30th anniversary of women in Rotary.

Here is a link to a video. It is a talk by Sylvia Whitlock, the woman who led the legal fight for the inclusion of women in Rotary.

President Jose asked for a moment of silence due to the death of Robbie Chase while on vacation in Africa to celebrate Doug Chase’s 60th birthday.  While in Zanzibar she suffered a blood clot to the brain.  In other news, member Ray Foreaker, fell and broke his neck!  It could have been a lot worse than it is, but he is having great difficulty in getting around at the moment.

Kathy Schwartz asked, “Who wrote Common Sense?”  Thomas Paine!  Ted Wilmsen’s ticket was pulled, but he did not pull the winning marble.

Today we had Mike Muscanella from Paduaa, Kentucky.  He is in hospital administration. 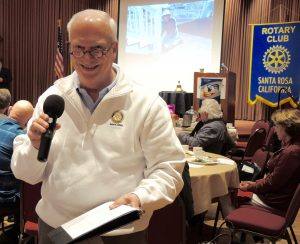 Jack Abercrombie introduced David Berman.  Sounds like David is considering membership.  For the record, he owns a company called Berman and Associates that does Agribusiness consulting, finance, industry analysis and appraisal. Bill Crowley introduced Tony White who is a retired professor.

REPORT FROM THE BOARD MEETING OF MARCH 7TH:

President Jose said the board was reviewing the current budget and was pleased to report that the club is well capitalized at this time.  We have money set aside for all contingencies along with funds for the operating budget and charitable contributions.

Will Haymaker was just back from Mexico and brought back some Mexican Coffee for President Jose.  I don’t know if he was joking or not, but Will commented on cannabis growing between the rows of coffee! “It will wake you up and set you free.”

Bill Rousseau gave us an update on the cannabis tax measure from Tuesday’s election.  It overwhelmingly passed by at least 73% and they are not finished counting.

Carolyn Fassi will be taking over the guidance of the Interact Club through June.  There are 22-23 kids in the program.  President Jose told her that the club has funds for 4 Interact kids to go to the upcoming District Assembly on Saturday April 1st.

Ryan Thomas is coaching his 3rd grade son in basketball.  They did not win the tournament, but they did well.  He is proud that his son won first prize for an Ag Day essay!

Richard Lazovick donates a wine making kit to be auctioned off! President Jose does a marvelous job as auctioneer and Steve Olson goes home with the kit!

Kris Anderson announced that Rotary Means Business will be meeting April 6th at World of Carpets at 3023 Santa Rosa Avenue on April 6th from 5:30 to 7:00.  Please come out if you are interested in doing business with fellow Rotarians. 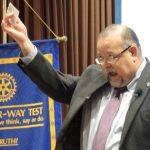 Sam McMillan donated two tickets for the 4H Foundation pancake breakfast in Rohnert Park this Saturday.  President Jose auctioned them and Kathy Schwartz was the winner.

Pete Lescure needs some people to sign up for fellowship duties during the month of April.  If you are a red badger, please see him to fulfill your requirements for receiving your blue badge.  If you already have your blue badge, you can sign up too!

Ray Giampaoli handed out forms for us to all fill out for the hours we put in to Rotary volunteer events and how much cash we donate.  This will be for the period on July 1, 2016 to the present.  In the future the club will be carefully measuring this for Rotary International.

We had a few members receive their Paul Harris certificates and pins today.  Casey D’Angelo and Ray Giampaoli got their first award.  President Jose got his second plus his wife Esthela got her first! Larry Miyano got his 3rd. Will Haymaker got a ruby pin.  I am not sure how many Paul Harris’ that is for him!  Plus we had a surprise Paul Harris Fellow…..Richard Lazovick was given a Paul Harris for all the work he does for our club.  Congratulations to all and thank you for your support!

ROTARIAN OF THE MONTH:

Casey D’Angelo was named Rotarian of the month for his successful kick off for the second year of the New Gen Peace Builder’s Program.  Congratulations!

nd much more. James Lyne from a February 2013 TED Talk said,  “When in doubt, always turn off your computer if you are not using it.”  That gets rid of 80% of the crime.  Caleb Barlow was the other TED Talk speaker from November 2016.  80% are criminal gangs.  Cyber security is worth $445 BILLION in crime….much larger than many countries GDP.  It is not just your computer; it is your cell phones, notebooks, etc.  All are vulnerable to attack.  Ransomware is big.  Your device is hacked and the hacker demands a ransom for you to get your device back in working conditions.  What to do about it: