Our Program for March 16th:

This meeting will be held at The St. Rose Business Center

Paul Jaffe is the co-owner and founder of Copperfield’s Books Inc. He graduated from UCSB with a degree in Comparative Religious Studies and started his bookstore career shortly after. Paul has served as the President of the Northern California Booksellers Association and is now on the Advisory Board for the American Booksellers Association. His parents read to him quite a lot as a child for which he is forever grateful.

Copperfield’s started as a single 800 sq/ft bookstore with 2 employees in Sebastopol in 1981 and now is about to open its 8thstore in Novato later this month. It now occupies over 50,000 sq/ft of retail space and has 110 employees.

Paul’s presentation will center on the importance of a business to be a part of and serve the needs of the community and how Copperfield’s has invested in that vision.

Along with careful business planning and oversight, hiring and retaining key employees and an intimate knowledge of our industry it has navigated a very difficult climate for bricks and mortar stores which has seen many other independent bookstores close in the past decades.

……meanwhile, back at the Flamingo we find President Doug reminding us all that:

We will be meeting at St. Rose on March 16th

Steve Baime led us in the Pledge and Rich de Lambert read his mom’s recipe for life as the invocation.

Rich de Lambert will be having shoulder surgery next week (don’t tell him I told you).

Diane Moresi – Rotarian of the Month

Once again it is Diane Moresi for all the work she has done for the NewGen program among many other things for the club!

Casey D’Angelo gave us an update on this incredible program that will be presenting its project on Saturday, April 16th (location and time to be announced).  The program started in January with 26 kids from the 5 Santa Rosa High Schools.  They chose to do a mentoring program for foster kids in the 8-12 year old age group.  This is particularly difficult because you cannot get the names of the foster kids very easily.  Judge Alan Hardcastle and Jose Guillen are helping the kids with this task.  So put April 16th on your calendar to come and see the fruition of this fledgling program! 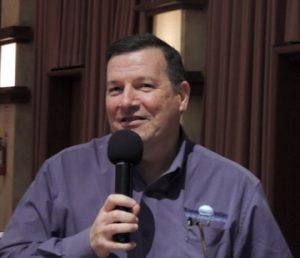 It is that time of year to announce and vote on the person who will lead our club in the Rotary year of 2018-2019.  That person is Tony Roehrick!  It is 2.5 years away, but the president’s job requires training and preparation.  By planning several years out our club has the benefit of consistent leadership.  The club membership voted in favor.  Congratulations Tony!  Congratulations Rotary Club of Santa Rosa for an excellent choice!

President Doug is not finished with his term as yet, but the award season is upon us and that meant he needed to wrap up his goals before the end of March.  President Doug had 32 goals that he wished to achieve this year.  One of those goals was the “Every Rotarian, Every Year” for the $100 contribution per member to Rotary International.  Our club has not met that goal in a number of years.  Not this year!  We made it!  Our club is now up for a Presidential Award!  Thank you Doug!

On April 6th, Robert Pierce our famous, fabulous photographer will have his camera at the meeting to take professional photos for our members.  We want to have the best looking Rotary directory in the world!  So if you need a new photo for the directory come prepared to have your photo taken.

But wait!  There is more!  If you want to have your photo to use for other purposes, besides the directory, you can purchase the rights to that photo for $50……AND Robert will be donating half of that fee back to the club!

Mark Burchill is forming the committee to do the debunking of President Doug in July.  This year the debunking is going to be tentatively at the Wikiup Swim and Tennis Club in the afternoon of July 6th.  It is time to get the volunteers together and start working on the script for the show.  Rumor has it that they are hiring a famous translator!  So if you want to help with the goofball fun, contact Mark and he will let you know when they start meeting and plotting…….

Norm Owen went to last month’s SCARC meeting and won the 50/50 raffle!  He did the right thing by giving it to his beloved Bev, but we got a donation out of him anyway.  Thanks Norm!

Tony Roehrick was seen driving a new set of Lexus wheels that he purchased from club member Gary Swartz, Lexus sales manager. Both made generous donations to polio, with Gary’s being in the amount of $200.

Marnie Goldschlag was put on the spot and asked to recite the Four-Way Test.  She promptly replied,

No, that is not THE Four-Way Test.  They gave her another shot and she got it!

Yes, we did have a raffle today.  Only $66 in the pot along with a bunch of marbles.  Rich de Lambert’s number was pulled, but alas not the right marble.

Being president, no matter how you prepare, does have its challenges.  A few of these fabulous Rotarians that took on the job shared some memories:

Jeanne Levin: Queen Jeanne was our first woman president.  A gentleman by the name of Lew Robbe was the secretary at the time.  You did it Lew’s way or the highway. No one really knew what the job entailed, and then he died.  Bob Higgs stepped up to take the job even though he had no clue what to do.  Jeanne, Bob and the board of directors managed to figure it out.  As Jeanne said they learned “To Keep Calm and Carry On.”

Will Haymaker and Steve Marburger

Steve Marburger:   Steve was not president of our club, but a club in New Mexico.  It was 1999-2000 when everyone was concerned with Y2K.  The club decided to do a reverse raffle for their fundraiser that year. All the raffle tickets must be sold and then you start drawing the tickets.  The very last one pulled gets the major prize.  It was their best fund raiser ever.

Rich de Lambert:  Rich was proud that the first Rotarian women became club members in his year.  Among those women were Dorothy Hutchinson and Sharon Wright.  Of course they lost some male members that year.   That was also the year Polio Plus started in a big way.  The club raised $100,000 that year!  They also started a disability awareness program that is still being done in the schools to this day.

Les Crawford:  Les was president when they started the Nutcracker program for the kids.  It is a big task each year to have the schools select the kids, get them on buses and off to the theatre where they saw the show, got a present and after show treats.   It was also the year we did two major fund raisers; Denim and Diamonds and the Shrimp Feed.  An unknown restauranteur named Guy Fieri helped us make a success out of the shrimp feed..

Will Haymaker: Will remembers that was the year that John Brown nominated Susan ZW as president elect nominee.  Unfortunately Susan had been in a serious car accident and was out of commission for quite a while so she declined the position.  Later on she and Zack moved back to Virginia where she joined a Rotary Club, became president and rumor has it she is District Governor?

Peggy Soberanis:  Peggy’s year was a challenge to put it mildly!  Former Rotarian, Creed Wood, died suddenly and we found out it was suicide.  This really was devestating to our club where he was an active member and well liked. It was also the year that the club was being torn apart over the upcoming pillow fights.  She credits her board of directors for their support to get through the tough challenges of that year and the support of past president Don McMillan.

Bill Rousseau:  Marnie Goldschlag was the president during the first time we did the Giro Bello.  We had as a partner, professional bike racer Steven Cozza.  The plan was to share the profits.  However, Steven Cozza’s group did not do anything other than lend his name to the event.  So during Bill’s term as president they had to work out a settlement.  Not fun!

Debi Zaft: Debi remembers her year as one big hot flash and one board meeting where there was a real fight with fists flying!  But it was also the year we started some projects in Africa.  We helped women get chickens to raise and we sent medical equipment, including an x-ray machine

Joel Desilva: Joel remembers a meeting when the guest speaker chose not to speak about the subject the person was invited to speak about.  He had to end the meeting early!

Barbara Beedon: Barbara’s year was a fiscal challenge.  With the help of the board they made it through.  She also had a problem recognizing people and fining them.  She started the “Fine Master” and we will always remember that Just Joel was always the best due to his Rotary math problem.

Erin Dunn: when Erin was president of her Rotary Club she had every member go to a local pottery store, buy a ceramic pig and paint it for a fund raiser.

…and as the meeting was ending Realtors Kathleen Archer and Marnie Goldschlag were recognized for their phones going off during the meeting.    Just because you were president does not mean you can skirt the rules, even for today.  LOL!

Oh, and did we tell you?  Next week’s meeting is at St Rose Business Center, but I will probably forget….. 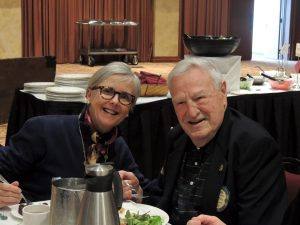 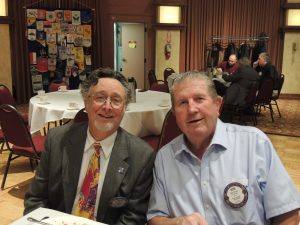