Teresa and Michael are back by popular demand. Our own Rotarian musician extraordinaire Layne Bowen has once again arranged this exceptional program for June 7th and will emcee the day.  What a great way to close out our program year.

TERESA TUDURY started writing songs at age 12 and was performing in San Francisco nightclubs by the time she was 15. With a deep, sultry voice that magnetizes audiences, and a scathing comedic wit to match, Teresa is a consummate performer who pours out her original songs with power, verve, passion, and disarming humor. Throughout her career, Teresa has recorded or performed with such greats as Leonard Cohen, Rickie Lee Jones, Lyle Lovett, Taj Mahal, Leo Kottke, Charlie Musselwhite and Bonnie Bramlett.

MICHAEL CAPELLA began his music career as a child singing in the car and around the campfire.  After twenty years of performing other people’s songs as a solo artist and in bands, he started writing and performing his own songs about in his 40’s.  He most recent projects are co-writing and performing with Jaclyn Steele, a talented Atlanta based artist, and performing with MCB (Michael Capella Band), which features Layne Bowen on lead guitar.  MCB will be releasing a CD of all original material in June 2017.

Ginny announced that all is sunny in Santa Rosa!

Thanks Matthew Henry for doing double duty today. He ran the raffle and led the pledge.

With only $55 in the pot and 9 marbles in the bag Kim Graves took a shot at it, but she only walked away with the $10 consolation prize.

QUICK PRESENTATION – ODYSSEY OF THE MIND

Recently our club Foundation donated $100 to help with a fundraising effort to send  a group of Rincon Valley Middle School students to the World Odyssey of the Mind competition in Michigan. The students first had to win the state competition. At Worlds, our team from Rincon Valley placed 11th in total team score out of 55 teams from around the world! The 4 kids representing RVMS each told us about some element of the competition and were very impressive in both their knowledge and confidence in speaking to our club. Great job, kids!

Matthew Witteman discussed a new state program for creating sustainable ground water in California and its impact on our region. Matt described the  groundwater basins in Sonoma County: Santa Rosa, Petaluma and Sonoma Basins are 3 currently recognized basins, with a separate basin west near Sebastopol being considered for inclusion.  In talking about groundwater in California, Matt noted that Sonoma is actually in fairly good shape. Compare that with the southern San Joaquin Valley which has subsidence (lowering of land surface due to excessive pumping of groundwater) of up to 50 feet! 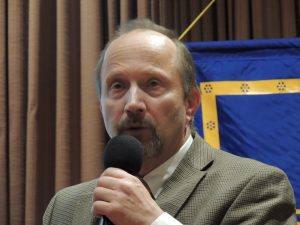 SGMA (The Sustainable Groundwater Management Act) was signed into law by Governor Jerry Brown in 2014.  SGMA will establish a set definition for “sustainable groundwater management”, and will require a plan be put in place in the most important groundwater basins in the state. It empowers local agencies to implement the plan and establishes a time table for that implementation.  In general, the plan has the potential to negatively affect the amount of water people can take from wells and meters could be placed on wells to measure how much water is being taken. There are many potential complications and disputes, so it will be very interesting to see what happens as the program takes effect. Water rights issues have always been a complicated subject in the semi- arid west and this program is sure to spur more disputes and litigation.

The following membership application has been approved by our Board.  His name will be published as required by our bylaws.  Court Administration is happy to recommend him.