Paul Hamilton led the meeting in the Pledge of Allegiance. Ryan Thomas reminded all Rotarians of the importance of the Four Way Test. His thought for the day was to “live so that when your children think of fairness and integrity, they think of you”.

There were no visiting Rotarians in attendance.

Zachary Thomas was the guest of dad, Ryan

John McHugh announced that Tim Stewart’s mother recently passed away at the age of 101. Tim’s mother lived a full and rewarding life.

Julia Parranto is a trial lawyer who has her own firm, the Law Offices of Julia Parranto. She specializes in representing plaintiffs in personal injury cases. She enjoys trying cases and is willing to go to court when representing a client. Julia spoke of how she enjoys the feeling of living in the moment when a verdict is announced. She also has a partner in her firm who specializes in divorce law. 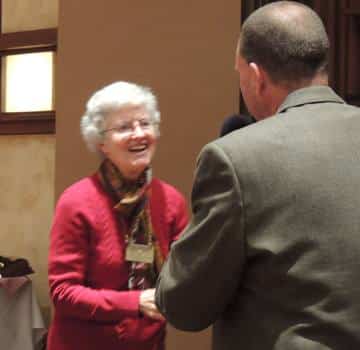 Peggy Soberanis realizes she does have today’s ticket

Steve Marburger announced that this week’s raffle jackpot was just over $200. It took Past President Peggy Soberanis awhile to realize that she held the winning ticket but she was unable to draw the winning marble and take home the jackpot. Peggy left with her $10 consolation prize.

President Mark inducted Emily Harrington, Branch Manager of Summit State Bank, as a member into our Rotary Club. Emily was joined at the podium by her sponsor, Cecil Humes.

Emily’s first experience with Rotary was as a Rotary Exchange student in Holland. She joins the over 1.2 million Rotarians worldwide in service, fellowship and camaraderie. President Mark encouraged Emily to get to know her fellow Rotarians, join a committee and rotate among different tables when attending our luncheon meetings. Emily was welcomed with a standing ovation from the members present. 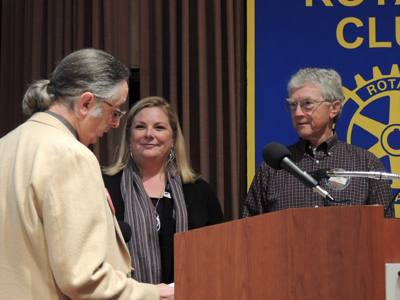 President Mark spoke of the need for Rotarians to be prepared when someone asks the question, “What is Rotary?”. We all should have the answer on the tip of our tongues. It’s what Mark called an “elevator speech”. One suggestion is to say that Rotary is a leadership organization made up of local businesses, professionals and civic leaders. Rotary meets regularly, we get to know each other, make friends, and through that, we are able to get things done in our community.   Remember that a Rotarian is like a Boy Scout, “always prepared” to give their elevator speech!

President Mark presented the slate of candidates for election to the Rotary Club of Santa Rosa’s Board of Directors, 2015 – 2017. The candidates include Elizabeth Karbousky, Shannon McConnell, Jack Atkin and Will Haymaker. Julia Parranto was nominated to the position of President for the term 2017-2018. The assembly was then opened to nominations from the floor. Since there were no nominations from the floor President Mark requested approval of the nominees as presented. The nominees were approved by acclamation.

The proposal presented for our Club’s consideration is to change the composition to allow a past District Governor to hold an at large position.

An “Aye” vote would mean less diversity but more experience in the committee. A vote of “Nay” would mean more diversity but less experience since only 3 of the committee members could be PDG. After some discussion and a review of the past practices a vote was called for. By a show of hands the proposal did not get approval from the majority of Rotarians present at the assembly. President Mark will notify the District of our vote.

Legacy Project Survey results were presented to the Assembly by President Mark. Seventy one responses to the survey were received. The Healthy Habits Project received 39% strong support/support and 61% neutral/not support. The Nature Project received 53% strong support/support and 47% neutral/not support. The decision on whether to fund either project as a legacy will be decided by the Board of Directors. If neither project is selected the agencies involved will be encourage to file for a charitable grant and work with our Hands On Committee. Rotarians interested in this decision are encouraged to attend the next Board meeting on December 2nd.

Doug Johnson presented the financial outcome of our annual fund raising event, the Giro Bello. In 2011, the first year of the event, our Club raised approximately $17,000. In 2012 and 2013 we raised $47,000 and in 2014 we increased that to $67,000 with 1,000 riders joining the event. Doug is projecting that in 2015 we should exceed $85,000 and have 1,200 riders participate. The long range goal for 2016 is to raise over $100,000 and have 1,500 riders participate. Kris Anderson has volunteered to lead the marketing effort for our next Giro Bello. Rotarians are asked to volunteer early and assist in making next year’s event a success. Everyone is encourage to participate.

The Giro Bello has become its own entity and has created the momentum necessary for it to be successful in the future. Comments from riders in last year’s Giro Bello were very positive. They demonstrate the enthusiasm our event has created.

“This was the most amazing bike ride of my life, truly epic”.

“Beautiful course – the best of the year. I love this ride”.

“I plan on riding it every year as long as I am able”.

Doug announced that Past President Don McMillan will be taking over the lead of this event for the next year.

President Mark reviewed the outcome of our second fund raising activity the “Pillow Fights”. There were 700 advanced tickets sold and a total of 1,100 total tickets sold. About 800 ticket buyers actually attended the event. It was anticipated that we would realize a profit of $10,000 from the event but the Club ended with a loss of $15,500. The event was planned as a family friendly event and the cost of the ticket was set to influence attendees. The venue worked out well and budget expenses were down 30% from projected due to several factors which reduced our costs. These included donated beer and lower security costs.

Some factors which may have affected the attendance included a late marketing start (July 1) and depending on social media as the main marketing approach. Traditional marketing strategies were not used.

The discussion from the Assembly floor indicated that a close look at our participation in this event is needed. The Board of Directors will review this event and decide whether we can increase profit and lower the risk of a loss.   The question before the Board is whether we should continue the Pillow Fights. Does it compliment or conflict with the successful GiroBello?   Does it expose Rotary to a new demographic?

Are the future rewards worth the risk? Should we cut our losses and cancel future events? President Mark indicated a survey will be out for our Club members to weigh in on the issue. Please let your opinion be known.

Much to the dismay of all present, there simply wasn’t enough time to recognize any Rotarians this week. There was a collective sigh of relief but we must remember there will always be a next week for those who are deserving.

Before President Mark closed the meeting Cathy Vicini announced that today was Jim Johnson’s 80th birthday. Happy Birthday wishes to Jim and a heartfelt thank you for all you have done for Rotary.