Important Notice: No Wednesday meeting on Nov. 7th due to the Veterans Day Salute Lunch the next day, Thursday, Nov 8th at the Veterans Memorial Auditorium, 11:30 am to 1:30 pm.

Our Program For November 14th:

COSTAS SCHULER AKA “THE PEN GUY”

You could say that Costas Schuler goes by a pen name. His pen name is The Pen Guy. One, or both of them, are (is) (?) famous for being a graphic designer, an artist, and a public speaker (and a funny one at that. He is the creator of the world famous Mercedes Pens Art Car covered in over 10,000 used pens he has collected locally and from around the world. Actually a total of 70,000 pens so far.

This pen car project has opened up a whole new world of opportunities to create art that inspires and uplifts the human spirit, speak and connect with millions around the world. Costas talks about his journey as an artist and how the creative process has transformed his life and allowed him to walk in greater destiny and purpose. His is passionate about helping others do the same by example in his journey with a Mercedes covered in pens.

November 21: No Meeting—Dark for Thanksgiving

The Halloween combination of Don McMillan with President Reagan was not only spooky, it was somewhat unsettling!

A definitely mixed crowd showed up at the Rotary meeting this October 31st. Familiar faces looked strangely unfamiliar, and Past President (2010-11) Don McMillan’s Ron Reagan’s mask effectively muffled his opening remarks, but the eyes shining through his peepholes looked eerily normal. Photographer Diane Moresi captured some of today’s Halloween characters, so scroll down for a sample of the best.

From his post in the back of the ballroom, Roy Thylin led us in the Pledge of Allegiance to our Flag, and then Genie Delles evoked these words with which she begins her day. From Mary Anne Radmacher, author of Lean Forward with your Life:

“Live with intention.
Walk to the edge,
Listen Hard.
Practice wellness.
Play with abandon.
Laugh.
Choose with no regret.
Appreciate your friends.
Continue to learn.
Do what you love.
Live as if this is all there is.”

Our thoughts and prayers are with Rick Allen as his seriously ill father remains in hospice care this week. Legendary Rotarian Dick Jenkins remains in Creekside Rehabilitation Center slowly getting back to normal, improving from his vertebra problems. Dick, who will soon mark his 43rd year in the Rotary Club of Santa Rosa, remains in good spirits and looks forward to impromptu visits and telephone calls from all who care. His direct number is 303-2173 and visiting hours are flexible between a late breakfast and a late bedtime. He’s in room 222; 850 Sonoma Avenue.

DR. JACK IS BACK

Speaking of “legendary”, Jack Tolin, the club’s resident dental surgeon since 1983 was back after a quick two-day “vacation” at a luxurious San Francisco hospital only a few blocks from the ball field where the SF Giants would nail down their second World Series in three years. Here’s the actual verified story of Jack’s most recent adventure that began two weeks ago: Jack Tolin’s back problems had been getting worse the past few months. By early October the pain was so intense that he could no longer stand up and nausea had become a problem.  He had been in bed for five days when Tuesday morning, October 23rd, his orthopedist ordered a quick MRI, told Jack he needed surgery immediately, and Jack’s wife— registered nurse Cheryl—drove him to a San Francisco hospital. By 10 am he was out like a light, woke up four hours later in the recovery room, had a good night’s sleep, and was back in Santa Rosa less than 24 hours later. Jack said he was lucky: The Giants played out of town and he watched every game of their World Series in the comfort of his own home.

This Wednesday, Jack decided to skip the Giants’ victory parade, drove himself to the Flamingo, strolled into the Rotary meeting wearing his favorite Giants shirt, and ate lunch. Nothing special, just an ordinary modern miracle. Jack swore that a few days earlier he only stood 5 feet, 6 inches. By this Wednesday, he was back to normal: 6 feet, 5 inches tall.

Last week, after “Lucky Rotarian” Deborah Gray won the first jackpot of the New Era and walked away with an accumulated prize of $230, Julia Parranto drew this week’s ticket, and then won by losing. With the decimated jackpot zeroed out and this week’s consolation prize still at $10 she won twice: the lucky ticket and a prize of $10 vs. a worthless jackpot. If this makes sense to you, you’ll have to wait two weeks before testing your luck. No Rotary meeting next Wednesday. We are dark because of the Memorial Day Salute to America’s Veterans on Thursday, Nov. 8th, at Sonoma County’s Memorial Auditorium. Scroll down for complete details about the 12th Annual Luncheon honoring our veterans.

Looking unusually spooky this Halloween, Past President Debi Zaft asked the question from this month’s Rotarian magazine:  “What music is Lisbon, Portugal, most famous for?” Kris Anderson, who has been guessing right at Rotary for a full decade, had the correct answer and qualified for the big cash drawing at the end of this year. The traditional music—Fado—was brought into the Iberian Peninsula by the Ancient Romans and rich European traditions. Now you know why it really pays to peruse your monthly Rotarian magazine.

As The Santa Rosarian weekly newsletter was being edited, the New York City Marathon was canceled by Mayor Michael Bloomberg amid growing criticism that holding the race so soon after Hurricane Sandy devastated parts of the city would drain resources and be an affront to residents recovering from floods. But you wouldn’t know it by looking at the finish line in Central Park on Saturday. Sure the bleachers were empty, workers were dismantling the signposts, but there were runners too—and lots of them—posing for victory photos at the finish line. They had gone ahead and run the 26.2 miles anyway. This summer, when Young Rotarian of the Year for District 5130, Santa Rosa Rotarian Athlete Carmen Sinigiani accepted a challenge to run in this fall’s New York Marathon from Santa Rosa native and Rotarian who is now Rotary District Governor-elect in New York City. Thanks to the club’s Facebook pages, Carmen kept us updated about her “Sandy Adventures in New York City”. Even though the race was cancelled at the last minute, she did make it to NYC and is there right now. Not surprising that Carmen pitched right in and decided to become a volunteer. Here is what she posted on Rotary’s Facebook page Saturday night: “Service Above Self! Headed out to volunteer for Sandy victims. The Marathon may have been canceled this year, but the Marathon donations went to a great cause. Now NYC has now has one more volunteer ready to help!”Read Carmen’s Facebook posts, give her our moral support, and enlist your friends, relatives, and co-workers in this Rotary version of “Where in the World is Carmen Sinigiani?”

Jeff Gospe delivered a box from Rotary District 5130 loaded with plaques and awards for fellow Rotarians. We were recognized for Club Service in overall Excellence in Community Service and for our fellow Rotarian Carmen Sinigiani being selected District 5130’s Young Rotarian of the Year. The Rotary Club of Santa Rosa received the Club Service Award for Excellence in Communications and Excellence in Public Image, 2011-12, and a club service award for Vocational Service.

Past President Debi was recognized by our club for her remarkable dedication and outstanding results as chair of this year’s second & last fundraiser—the well-attended and highly successful Casino Royale night on Saturday, October 20th. Congratulations again to Debi Zaft, who was presented with a gift certificate for a luxurious day at the Coldwater Creek Spa in Montgomery Village, named the best spa in Sonoma County in a recent newspaper poll.

Diane Moresi announced that the Children’s Holiday Christmas Party is scheduled to be held at the Spreckles Performing Arts Center next month. Her committee is searching for a new transportation sponsor to transport dozens of disadvantaged Santa Rosa school children to the Rohnert Park Performing Arts Center  for the gala holiday party presented by our Rotary Club. Contact Diane with names of prospective sponsors to underwrite this year’s bus expenses.

Nick Knickerbocker reminded the crowd that time is running out for the few tickets left for the Veteran’s Day luncheon presented by the combined Rotary and Kiwanis Clubs of Santa Rosa, featuring a concert by the Santa Rosa High School Band and a patriotic speech by retired Marine Lieutenant General Jack Klimp. The date is Thursday, Nov.8th 11:30 am to 1:30 pm, at the Veterans Memorial Auditorium. If you need last minute tickets, contact Nick at his home telephone as soon as possible.

If any single individual in the North Bay of Coastal California has his fingers on the pulse of the ebb and flow of information, public opinions, and local controversies on a day-to-day basis, it has to be the Editorial Director of the Press Democrat, where he has managed the Editorial and Op-Ed pages for 14 years. In a whirlwind description of this presidential election’s year’s controversial party clashes and three distinctively different presidential debates, watched live by huge television audiences in

the final weeks of the presidential campaign. Close races in many states, huge changes of redistricting California and selecting run-off candidates, and increasing public disapproval of the two centuries-old Electoral College determination in the presidential election made for intense diversity of parties, a greater focus on fewer swing states, and the intensity of on-going clashes of political infighting made it more difficult to sort out the real issues and significant battles of 2012. Gullixson made a heroic effort then opened of the last 15 minutes of his presentation to responding from wide-ranging questions from the floor and his informed responses.

Therefore, it is a rare treat for community-involved members of the first, largest, and oldest Rotary Club in Sonoma County to get a mixture of calculated observations, stream of consciousness, and off-the-cuff (and almost off-the-record) opinions this close to a major election. As a dedicated advocate of the urgency and acknowledge responsibility of journalism and the constitutional journalistic mandate of our constitution’s First Amendment Mandate, Gullixson was eager to foster diversity and fairness in questions and in his responses. Unknown to the public and to the Rotary Club, the management and staff of the Press Democrat—including Gullixson—were holding the lid down on one of the biggest news stories in the 150 year old history of our local newspaper. Scroll down and read the “sidebar” commentary that follows. 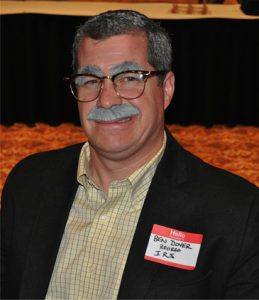 How did Kris get that Safari West bird to nest on her head?