UPDATE FROM THE SHERIFF’s OFFICE

We are fortunate to have the newly appointed Sheriff of Sonoma County Rob Giordano speak to us on September 27th.  Our own Club member and AG for District 5130, Marnie Goldschlag will be his host. The Sheriff will give us a “State of the County” update.  As time permits, he will touch on such topics as current crime statistics, what the hurdles are for LE in the County, how cannabis is affecting our communities, and maybe debunk some of the myths we may have about the role of the Sheriff’s office.  Misti Harris, Sonoma County Sheriff’s Office Community Engagement Liaison, hopes to attend as well.

It was with great sadness that Ginny announced Wally Lowery passed away last week. There will be a celebration of Wally’s life on October 1st from 3-5 at Legend’s Restaurant at Bennett valley Golf Course.

Doug Roberts raised an extra $100 at the last minute to raise the total donation to Polio Plus – the DG’s project-  to $1,550.00 and Jose Guillen auctioned off a basket of wine and other treats.  Vickie Hardcastle was the winner!

THE E-MAIL (This joke courtesy of Priscilla Abercrombie)

I’m coming home to get married soon, so get your check book out. I’m in love with a man who is far away from me. As you know, I’m in Australia and he lives in Scotland. We met on a dating website, became friends on Facebook, and had long chats on Whatsapp. He proposed to me on Skype, and now we’ve had two months of a relationship through Viber. My beloved Dad, I’d like your blessing, good wishes, and a really big wedding.
Lots of love and thanks.
Your daughter, Lilly

My Dear Lilly,
Like wow! Cool! I suggest that you two get married on Twitter, have fun on Tango, buy your kids on Amazon, and pay for it all through PayPal. And when you get fed up with your new husband, sell him on eBay. Love, Your Dad

Julia shared a video about Rotary New Gen Peacebuilders that featured scenes of our own club members working with our local students.

Rotary Peace Fellow Gail Ervin, Ph.D. shared her thoughts on peace building. She discussed the 3 pillars for promoting peace: service projects, peace fellowships and scholarships. Gail noted that conflict is the primary reason Rotary has not yet achieved eradication of polio.

Gail discussed a systemic approach to peacebuilding including structures, attitudes and transactions between communities to resolve conflicts.  She discussed Mediators Beyond Borders which works with underserved populations by invitation only.

Gail spent some time discussing The Kenya Initiative which involved a request by a warrior who had been a gun runner.

On Saturday, September 9th, we hosted a Rotary Day at the Laguna Environmental Center for facilities maintenance and repair. The volunteer turnout was fantastic! There were volunteers from 3 different Rotary Clubs (Rotary Club of Sebastopol, Rotary Club of Santa Rosa, Rotary Club of Rohnert Park-Cotati) and a group of Interact youth accompanied by adults and our Interact group from Brook Haven School overseen by Sebastopol Rotarian

Pauline Pellini. This was our second multiple Rotary Club workday and we plan to continue it as an annual event. This was a super way to get acquainted with fellow club members and those from other clubs, because it was wonderfully collaborative and fun! Yesterday I received a personal thank you note from our contact there, Maggie Hart, and it was signed by eight of their staff. They fully appreciate that so many volunteers from multiple clubs came out with such energy and expertise. They have mentioned the past two years and again in the note that accomplishing these tasks would not be possible without our support. Rotary provides a level of volunteerism at the Laguna Foundation that no other volunteers do. And.we finished a couple of hours earlier than anticipated. They are so grateful that these hardworking and dedicated Rotarians spent their Saturday helping them keep the Laguna Environmental Center in great shape, as well as beautifying this local community resource. Their facility will be in ship shape for their fundraiser this coming weekend. They hope we come back and visit often!

Rotary will be featured in the Laguna’s October e-news, so be sure to look for it on their website at: http://lagunadesantarosa.org/ We so much appreciate the gift certificate from Whole Foods Market that funded the bulk of the lunch provided. Laguna’s staff and hospitality are always a joy to work with. Again, my personal thanks to all of you! We hope to see you again next year. 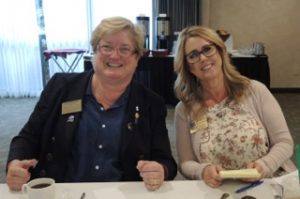