Our Program for September 28th:

How many of us feel our memory is not as sharp as it used to be?  Our speaker on September 28th will amaze us with his abilities and teach us some techniques to improve our own memories.

Known simply as “The International Man of Memory”, Chester Santos has left an impression on all corners of the earth. Through his ability to demonstrate extraordinary feats of the mind, as well as educate others to do the same, this U.S. Memory Champion is widely regarded to be one of the greatest memory experts in the world. His memory talents have been featured in numerous media outlets including the New York Times, Wall Street Journal, Washington Post,CNN, NBC, ABC and PBS. From recalling a random 100-plus digit sequence in five minutes to naming every U.S. congress person’s state and district number, there’s no memory challenge Chester hasn’t taken on.

* Many thanks to Kathy Swartz – Sgt at Arms, and Rich deLambert and Dan Schell for room set-up and take down.

Visit our district at: http://www.rotary5130.org

Check out Rotary International at: http://www.rotary.org

Come see us at: http://rotarymeansbusiness

Rotary 9/21/16
Pledge:  Molly and Diane
Invocation: Mathew Henry. Mathew gave us some things to think about starting with the “Yes -ies” and the No-ies”.

THE ROTARYHOOD OF THE TRAVELING GIFT BASKET

District Governor Wulff Reinhold’s idea of a gift basket to raise money has really taken off. Wulff was presented with a gift basket when visiting a club in the district and came up with the idea of asking each club to give him a basket to auction off at the next club he visited. He thought he might be able to monetize this idea, not for his own gain, but for the Rotary Foundation. He thought he might be able to raise 2 or 3 Thousand (Yankee) dollars, but, so far a whopping $36,000 has been raised. Today, our club was presented a basket from the North Napa Club for auction.  The gift basket containing Napa wine, savory treats, and two tickets to the wine train was raffled.   $2,000 was raised from the sale of raffle tickets. Julia Parranto was the winner and, ironically, the gift basket that will be presented from our club includes a paella dinner for 8 paired with Trecini wine to be held at – Julia’s home!

Ginny Cannon reported that Julia’s nephew in France is getting a heart transplant today.

CATHY’S JOKE OF THE WEEK

Two small county judges both got arrested for speeding on the same day. Rather than call the state Supreme Court for a visiting judge, each agreed to hear the other’s case.

The first judge took the bench while the second stood at the defendant’s table, and admitted his guilt. The sentencing judge immediately suspended both the fine and costs.

They switched places. The second judge admitted that he was speeding, too. Thereupon the first judge immediately fined him $250 and ordered him to pay court costs.

The second judge was furious. “I suspended your fine and costs, but you threw the book at me!” he fumed. The first judge looked at him and replied, “This is the second such case we’ve had in here today. Someone has to get tough about all this speeding!”

NO raffle as we raffled the Napa Valley Gift Basket.

Fred Levin shared that the Veterans program will be held November 9th from 11:30am to 1:30pm. Tickets are on sale for $15.00. We have the largest club in the district, so we should have the most people at the 16th Annual Tribute to Our Veterans. Buy a ticket for you, buy a ticket for a veteran! If you’ve never attended this event, you owe it to yourself to go – it’s a very moving tribute to our veterans and fallen heroes. The guest speaker will be Superior Court Judge Gary A. Medvigy and music will be provided by the Elsie Allen Marching Band.

Yale Abrams announced we need more people for the Saturday work day at the Laguna. Tim reminded us to come to the Airshow on Sunday.

Andrea Geary reminded us about the interclub barbecue social at the Living Room on September 30th, starting at 5:30 p.m.  Cost is $10 per person plus a side dish or dessert. Checks should be made payable to the Santa Rosa East Club.

Mathew Henry announced the YMCA golf tournament will be on for Friday, October 14th at Windsor Golf Club.

Kim Murphy led in recognizing those Rotarians with September birthdays with gift bags and birthday song.

Kris Anderson went to Oklahoma to attend her nephew’s wedding.  She forgot the gift for El Presidente in her car.  She gladly paid $25 for Polio Plus. 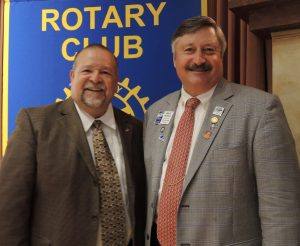 Rotarians in District 5130. He described the various Rotary, Rotaract, and Interact clubs that are active in our district. As we’ve been reminded in recent years, a big goal for Rotary, like other service clubs is to grow membership. We have been stuck at 1.2 million worldwide for 20 years. He noted that Millennials are not joiners, but they DO like service. He encouraged us to offer new and potential members engagement on the service experience side first, rather than simply having them attend a Rotary meeting.  This approach also increases relevance and value for the millennial generation. DG Wulff also promoted and shared several ideas to promote peace as a virtue. Rotary is uniquely qualified to promote peace locally and throughout the world.  He closed his presentation by encouraging us to attend the District Conference in May 2017 to be held in Lake Tahoe and the RI Convention in Atlanta, June 2017.

El Presidente thanked everyone for attending and members for helping out with the various tasks.  He even thanked hotel staff for their help with the lights and projection screen.  He closed with a quote from Pablo Neruda (Argentinian Poet) “If you don’t climb the mountain, you can never enjoy the mountain view”