Next Meeting is Hybrid
Wednesday October 6, 2021

ArtStart provides mentoring and stimulating work experience for youth 14-20 years of age while creating art for our community.   Founded in 1999 over 2000 Sonoma County young apprentices have successfully completed the programs which take place year round with both remote and in-person training at the Arthouse.

–>  Debi will send you the Zoom login link for the 12:00 meeting once you have paid. Feel free to put your feet up, grab a sandwich, and join the meeting. <–

In-Person / Hybrid Meeting details:
All meetings are in-person and online meetings. In-person meetings will be located at the Epicenter Sports Center located at 3215 Coffey Lane, Santa Rosa, CA.  Use the first door, closest to Piner Road. There will be greeters at the door to guide you.

–> Please note that you NEED TO MAKE A RESERVATION IN ADVANCE so we have a proper count.  Payments received by Saturday will be considered for the upcoming meeting.  Payments after that will be for the following meeting.
–> Debi Zaft will email you the link for online, once you have paid.  Use this link for details and to pay.  CLICK HERE!

Ann would love more people on the social committee and someone to be in charge.
See Ann if you are willing to help.

Watch The Meeting:  Did you miss the meeting?  Here is a link to the recording of last week’s meeting:
(No recording this week)
Please note it is only available to view until n/a

President Ray greeted us, and Bill Hatcher led us in the reciting of the Pledge of Allegiance and the Four-Way Test. His reflection was one of his favorite invocations from Past District Governor Chris Offer of District 5040:

“With friends beside us, and no person beneath us, with the bonds of Rotary between us, and our worries behinds us, with our goals before us, and no task beyond us, with a thirst for knowledge, and a dream of a Polio free world, we are thankful for our Rotary friends and the meal we are about to share.”

Jackie McMillan and Sasha Aponte (sounds like Sasha is moving back to Sonoma County from Guatemala).

Kris Anderson said we had $55.00 in the pot this week and 6 marbles. Dan Balfe had the lucky number, and he won the pot! Next week back to 10 marbles.

Ann Gospe thanked all the volunteers who worked on the Giro d’ Wine Country Bike Ride. It was an enjoyable day for riding, not to hot and not to cold. The numbers are being crunched to determine our share of the profit. That should be announced in the next week. Just think of the good things we will be able to accomplish!

Charlie Howard-Gibbon announced that the next 3 first Wednesdays in a row we will be working at the Redwood Empire Food Bank from 5-7:00PM. Those dates are October 6, November 3, and December 1. Put them on your calendars now to help. Debi Zaft will send out the signup via email.

This Week’s Speaker: Aimal Halim on what is up with him and the status in Afghanistan 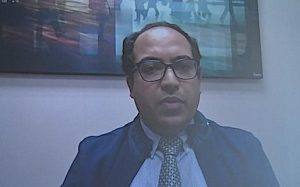 So nice to have Aimal back for a third visit! As you may recall, Aimal made friends with a soldier, a deputy commander at the base, from Reno when he was working as a translator for the U.S. Army in Afghanistan. This soldier, a Rotarian, was impressed by Aimal and told him that if he could get to Reno, Nevada he would pay for his college education. Aimal was told by the Americans, “We are here to help” and they did. the Americans were the personification of the Four-Way Test. Aimal got to Reno, and he got his degree from the University of Nevada. Aimal got to know Rotary very well and he came to speak to us the first time several years ago.

Born in 1989, Aimal grew up in Afghanistan without a father. His father was killed by the Soviet Union soldiers 6 months after he was born. His mother is illiterate, and he has a sister that is 6 years older. They were extremely poor, but his mother kept them strong. Aimal learned English from watching TV. When the United States came to Afghanistan to kill/capture Osama Bin Laden and drive the Taliban out of Afghanistan, Aimal was 13 and was eager to work for the Americans to earn money. For the first time his family was not living in poverty. The warring tribes in Afghanistan killed more people than the Soviets, but when the Soviet Union left the Taliban said Mohammed asked them to lead. They were nice at first but then became a brutal regime. 6 million Afghanis left Afghanistan from 1989 to 2001. Maybe that many died from malnutrition. It was 2009 when he graduated from high school and voiced his desire to go to college, but his family was too poor to send him. That was when he got the offer of free college if he could get to the United States. He graduated in 2014 and applied to the Peace Scholars program in Bradford, England and was accepted. He got his master’s degree in conflict resolution in 2016. He went back to Reno and started helping refugees in Reno to settle in the United States. He teaches them American customs, language and all the other things 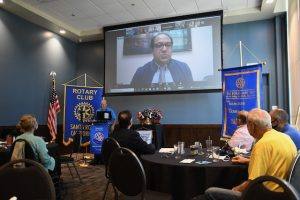 they need to know so that they feel they belong in the United States. He does not want them to become isolated as many refugees from other areas have had become. He has been able to send money back to his mother and other family. Until recently they were doing well. He has been trying to get his mother, sister, and his nieces out of Afghanistan. They almost made it before the Taliban came back. They have the proper visas to get out. Now they are living in terror. They hardly go outside. He talks to them every day even if it is just for a few seconds. Aimal is adamite that the last 20 years have not been a waste. 30% of the people in Parliament are women. they have elections. Before the Americans only 1000 girls had education. Now millions go to school. You cannot silence a whole country. They have social media. Taliban atrocities are all over social media. the Taliban cannot kill everyone. The country cannot go back to the 6th century. Aimal thinks that the Taliban will collapse in 5-12 months. Again, we did make a difference in Afghanistan. It was a blessing to have the American’s there for 20 years.

Oh, and the Green Bay coffee mug? While working for the American soldiers he met some from Wisconsin who invited him to watch the Packers play on Sundays. They made sure he knew that the Green Bay Packers were “America’s team.”  Thus, starting a fondness for football and all things Packers.

A question on where the Taliban was recruiting members.  There are about 70,000 Taliban in Afghanistan.  Where did they all come from?  Pakistan.  Aimal says the US government needs to put more pressure on Pakistan because they are exporting very bad people.

On the relationship with Iran:  yes, during the Shah’s regime there was good relations between the two countries. Iran is more Shite and Afghanistan more Sunni, but their cultures are much the same.

The minimum age to be president in Afghanistan is 32.  Aimal is now 32….Aimal for President!